SYNOPSIS: A tie-in to “The Joker War”! Catwoman returns to Gotham City to get even with the people who stole her plans and used them against Batman…and if you’re the Riddler or the Penguin, you better watch your back, because Catwoman is coming to claim what she deserves…and that’s everything! Plus, two bonus tales: One a story about Catwoman going back to her home turf of Alleytown to start her empire, and another about a cat trying to intervene in a conflict of cat versus woman! 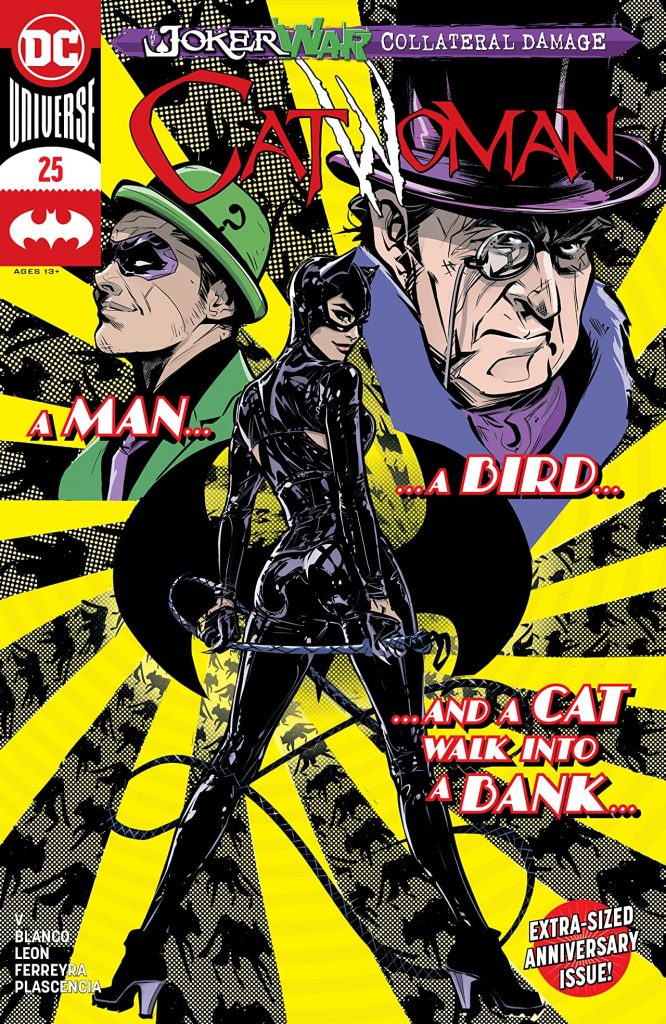 Issue #25 of Catwoman is an extra-sized anniversary issue, so you actually get three stories in this volume!  Let’s dive in.

The first story is “Duende,” which finds Catwoman partnering with Penguin and the Riddler to retrieve Bruce Wayne’s fortune back from the Underbroker’s offices.  It’s the Joker War tie-in, and the story is… serviceable.  It isn’t exactly exciting, and it’s extremely predictable, but what more could you expect from a tie-in?

Ram V is the writer (he’s actually the scribe for all three stories in this issue), and though the main plot is a bit ho-hum, the inclusion of Selina’s flamenco dance is an interesting addition I’d like to see more of.  And speaking of which, Selina’s dance with the tiger, told in shades of brown, black, and white, are visually stunning, courtesy of art and colors by Fernando Blanco and FCO Plascencia, respectively.

The rest of the art in the book is fine, but the flamenco pages an absolute standout for this book.

“Return to Alleytown” is the second story.  Selina returns to Gotham to reclaim her old stomping grounds.  A few low-level street thugs peg her for an easy mark – little do they know that they are dealing with the infamous Catwoman!

I’m glad to see Catwoman walk the streets of Gotham once more.  Her excursion in Villa Hermosa was entertaining (at points), and I’d be willing to see her return there in the future (as long as there is purpose behind it), but Selina belongs in Gotham.

Ram V appears to be taking the narrative reins of the Catwoman storyline away from Joëlle Jones for the time being, which (I think) is a good thing.  At least for now.  Hopefully, we’ll get some decent stories in the coming months!

Art for this story is by John Paul Leon, and the urban landscape he creates here is fantastic.  The buildings, the railings, the steps, windows, etc.… all of that extra attention to detail made this story especially striking.

And last (but certainly not least), the issue is wrapped up by a cute little story called “Cat Vs. Woman.”  Catwoman’s return to Gotham hasn’t gone unnoticed.  One four-footed spectator is keeping tabs on Selina’s movement and isn’t exactly happy to see a new cat in town.  But can these two felines share the same alley?

This story, to me, is the most interesting of the three.  It’s fresh, it takes a chance, and it’s playful.  Good job, Ram V.  The art from Juan Ferreyra fits the story well; the cat POV is fun, and he uses silhouettes to great effect.

So there you have it!  A new month of CATWOMAN and three stories to keep you going until October.  There’s amusement to be found in these pages, but nothing is likely to blow you out of your chair.  I’m hoping that a new, solid storyline starts next month – I’d like to sink my teeth into an engaging new crime story.  Let’s hope that Ram V delivers something worthwhile. – John Funderburg 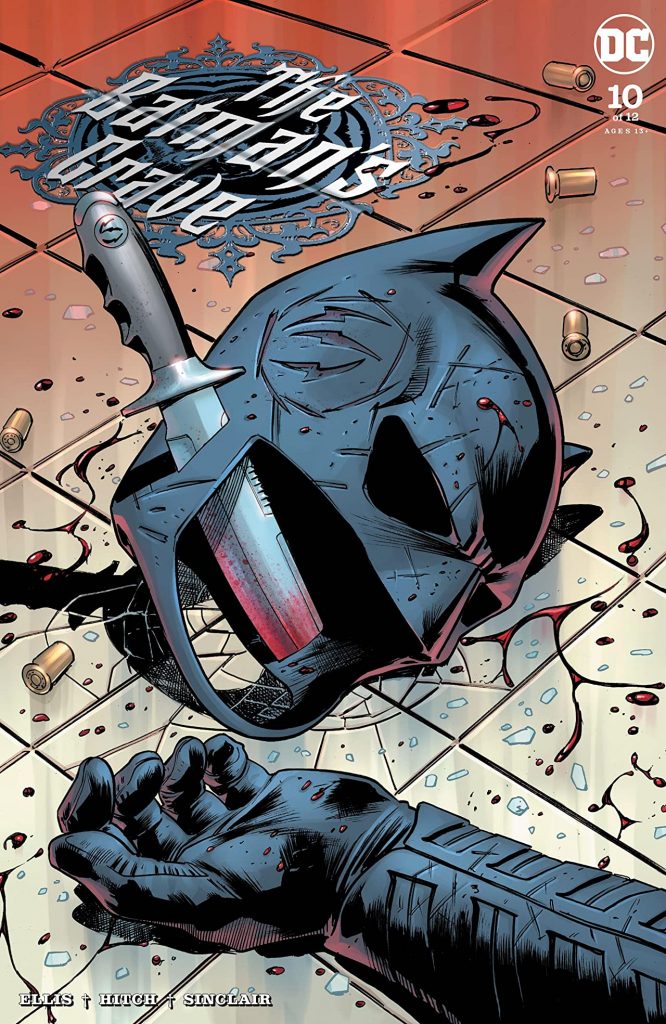 This series is ten issues in and the toll it has taken on The Batman is starting to come through. Right from the first panel, Hitch depicts a Batman that is sore, tired, drained.

As Bruce takes a shower, each panel in the present day is intercut with a flashback to an injury from a prior issue. Hitch really sells the trauma in Bruce’s expressions and posture, having the cumulative effect of emphasizing just how human once again this interpretation of Batman is. You feel how completely wiped out this series has made him, especially when he does finally succumb and blackout, injuring his head.

Of course, Batman can’t be out of commission for long, as Gotham once again has need of him. Racing into action against the Scorn Army, the latest Bat(tank?)mobile barrels into the bad guys with as much reckless abandon as Batfleck in Batman v Superman. The comparison is helped by the fact that Hitch, known for his widescreen style action, utilizes the page layout to his advantage, and expands the action out over a two-page spread.

It’s not just the panel layout that I love about Hitch, though. It’s the little details, like when the Batmobile is dealing with the army, you can see Batman gliding behind it in the background on a Bat-Hound. Or how Hitch utilizes the arsenal in his utility belt and finds a place for everything. It feels functional and like thought and care was put into it.

Meanwhile, back at stately Wayne Manor, the security alarms are going off and Alfred carefully goes to investigate, only to find the deadly and deranged Cornelius Stirk has come to pay Bruce Wayne a visit. I have to admit, I was very nervous for Alfred. Hitch’s interpretation of Stirk comes off far more physically imposing to me than the late, great Norm Breyfogle’s.

I needn’t have worried. Remember that attention to detail I mentioned? Hitch employs it yet again here, having Alfred’s right hand neatly tucked behind his back the entire time, looking every bit the proper, dutiful English butler. English spy is more like it! As Stirk lunges and the page turns, Alfred whips out a gun and shoots Stirk at point-blank range! Twice. He pauses, then shoots twice more for good measure. I can’t say I blame him. As Alfred would admit, he’s more of a frail, defenseless man these days, not a British operative in his prime. He then goes back again and shoots him TWO MORE times. It’s so expertly paced and rendered that I had to laugh and be appalled at the same time!

Alfred then pours himself a stiff drink, calling Bruce only after that first sip is down and he’s settled his nerves. There’s something very Bondian about it. Of course, when Bruce is home he’s not thrilled about any of what transpired, but Alfred calms him ever so slightly by saying that he used frangible plastic bullets. The issue of guns in his home obviously gets brought up and both sides have very valid perspectives that fit their unique worldviews. For whatever reason, I found Alfred using a firearm shocking, though there’s been plenty of precedent for that before. Ellis dances around the issue deftly, pointing it out, but not declaring a winner.

There’s also an element of Bale and Caine’s Bruce and Alfred as they verbally joust back and forth, a light, entertaining playfulness that comes to a head when The Batman has to explain to Gordon what happened. Try hearing those two actors’ voices as you read their scenes. It’s a perfect fit!

After much contemplation, Batman’s comes up with a plan to defeat Scorn and take down his army. It’s brilliant and perfect for this series, a series in which Batman has had to take a look at himself and how he operates, courtesy of Alfred’s barbs and observations. It had me thinking about Ellis’ endgame here as we near the final two issues. What if The Batman’s Grave doesn’t find Bruce Wayne laying next to his parents, but the idea of Batman metaphorically dies as Bruce finds a way to better serve the citizens of Gotham? I guess we’ll know soon enough.

After the last issue didn’t hit the spot for me, this one is right back on top. It had great characterization, art, humor, and conjured up some ethical debates in my head. Before I forget, a tip of the hat to the coloring of Alex Sinclair. He knocked it out of the park with his excellent shadings, particularly in the shower/flashback scene! The end of the story is almost upon us and I expect we’re in for some show-stopping action next time as we race to the conclusion! – Javier E. Trujillo