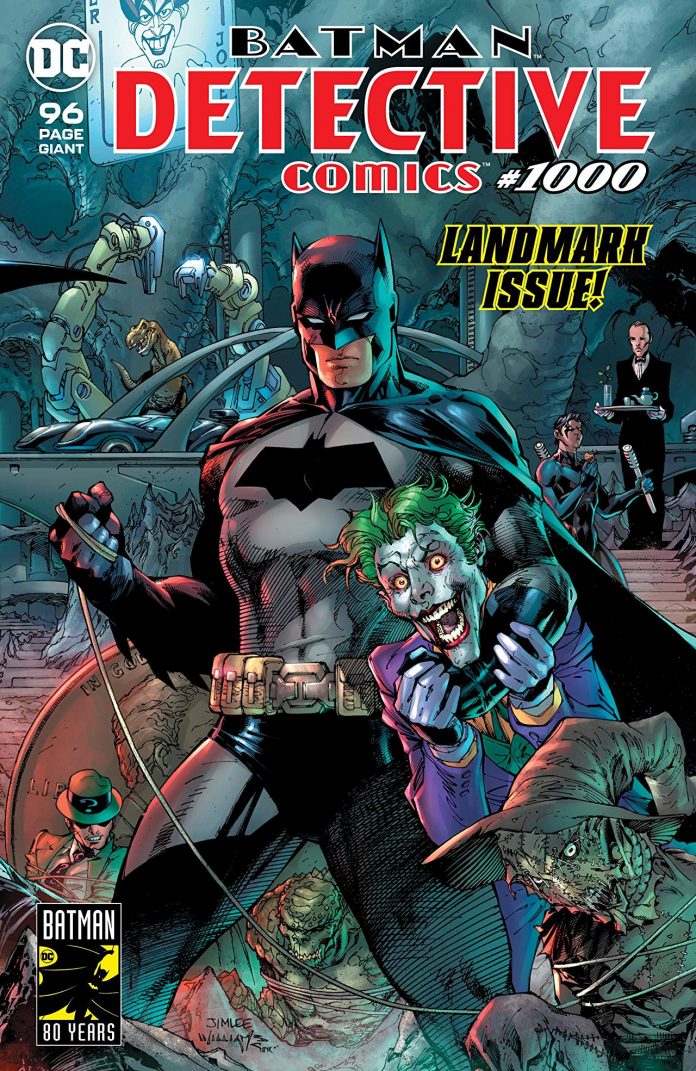 SYNOPSIS: After 80 years, it’s here-the 1,000th issue of DETECTIVE COMICS, the title that literally defines DC! This 96-page issue is stacked with an unbelievable lineup of talent that will take you on a journey through Batman’s past, present and future…plus a sensational epilogue that features the first-ever DC Universe appearance of the deadly Arkham Knight! But who is under the mask? And why do they want Batman dead? The incredible future of Batman adventures begins here!

Today is the day we all have been waiting for…the release of Detective Comics #1000!

Detective is the second title in as many years to reach this milestone.  Last year DC’s other flagship character Superman was the first to reach this landmark in Action Comics.  After 80 years and 1000 issues of Detective Comics what better way to celebrate the World’s Greatest Detective than a 100-page special!

Legends new and only have collaborated on a very fine celebratory issue. From pairings of writers and artists you have come to expect, some you never thought of as a team and some wonderful variant covers. Detective Comics #1000 has something for everyone, early Batman, brutal Batman, Batman & Robin.  Whatever you could think of and whoever you could think of is in this issue.

Similar to Action #1000 there are hundreds, literally hundreds of variant covers.  Covers exclusive to big comic chains, midnight release covers, covers by an endless list of A-list artists, some exclusive to a specific era of Batman.   From BTAS genius Bruce Timm to living legend Frank Miller it goes full circle.  The covers that caught my eye are Jim Steranko’s 60’s cover, Tim Sale’s 90’s cover and Jock’s 2000’s cover.  On the latest podcast #141 Ryan Hoss, Ryan Lower, Jay Yaws and myself break down the main variants and our favorites. Be sure to give that a listen!

Ten dollars is a hefty price tag for any issue but this anniversary issue is well worth it.  Out of the 11 stories I can honestly say that there are only two I didn’t really care for and in those two stories the stellar artwork did more than makeup for it.  I’d like to talk about my top four stories of the issue highlighting the best of the book. As I mentioned earlier BOF Podcast #141 covers this issue in intense detail on all 11 stories in the book.

The first tale reunites us with writer Scott Snyder and artist Greg Capullo for Batman’s Longest Case.  This was beautiful storytelling about the early years of Batman, one of his seemingly impossible to solve cases. Snyder and Capullo do a great job taking us through the years from the days of purple gloves and suction cups to the present day.  Seeing Batman perform his due diligence is always a treat for me. Then right when he thinks he solved the case it turns out to be an initiation.  Spearheaded by another Detective Comics veteran and a personal favorite of mine, Slam Bradley and the Guild of Detection.  Some of the greatest Detective in the DCU have been leaving a trail of breadcrumbs to see if the World’s Greatest Detective is everything he is cracked up to be.

Now tell me if this is a pairing you ever thought you would see in an issue of Detective writer Kevin Smith and artist Jim Lee.  Talk about a pleasant surprise!  Kevin Smith has dabbled in comics before, writing Daredevil, Green Arrow and Spider-Man just to name a few. I never would have guessed that he would be in this issue and he would write such a great tale on top of it.  In fact, I’m willing to say that this is the best comic Kevin Smith has ever written, it’s that good.

The story is called Manufacture For Use and brings us two of my favorite things about Batman, Matches Malone and the yellow oval.  The yellow oval especially is something near to my heart, starting with Keaton’s unique logo atop that bright yellow target on Batman’s chest.  It’s something that has almost been ditched aside in recent years. In this story, Matches Malone goes shopping in a speakeasy-like “gift shop”.  What is Matches looking for? Why none other than the gun that shot down the first family of Gotham, the Waynes.

As Matches and the owner of the “gift shop” discuss the merchandise Smith and Lee take us on an adventure as Batman fights off the various members of the Gotham Underground.  No matter the villain Bane, Killer Croc or the Ventriloquist they all go after one thing, the yellow oval.  Now you might think this is pretty dark Bruce buying the gun that killed his parents and Alfred agrees with you 100%.  It is at that moment when Smith turns the story on its head and crafts an emotional tale “I’m going to burn the metal that killed my parents. And forge it into something useful. So that the metal that broke my heart as a child? That same metal will protect my heart as a man. And that is justice.”

Bruce melts down Joe Chill’s gun and uses is for armored protection under the oval.  That ladies and gentlemen is a definitive Caped Crusader story and it came from the director of Mall Rats. Jersey stand up!

What Bat-fan has ever had enough Denny O’Neil? The answer is none!

O’Neil is a legend in the game. He and Neal Adams changed Batman in the 70’s and brought him back to his dark detective roots.  O’Neil is paired with artist Steve Epting for “Return to Crime Alley”.  This is a story about one of my favorite side characters Dr. Leslie Thompkins.  A simple story, some punks are out causing trouble on Halloween night.  They come across Dr. Thompkins and what they think is some “guy” dressed as Batman.

The punks sure did mess with the wrong guy in the wrong alley.  Batman was in rare form as we see him lose his cool but thankfully Dr. Thompkins was there to reel him in.  Showing that even The Batman himself is vulnerable to emotion.  Showing how characters like Dr. Thompkins, Alfred and Robin are necessary to pull Batman out of the darkness when he loses himself. I always enjoy seeing someone with stature talk to the Batman, someone who isn’t afraid of him and that is Dr. Thompkins.

Her compassion knows no bounds but her respect is demanded at all times even from the Batman.  I do think Epting drew Dr. Thompkins too old and grandmother like but that is my only complaint in this story. There is a beautiful drawing of Batman’s cowl fading in the background while the Waynes are getting shot that is nothing short of magnificent and total lock screen material for the digital crowd.

My favorite story in this issue comes from a pair of old reliables. Writer Paul Dini and artist Dustin Nguyen present “The Legend of Knute Brody”.  I know you have a huge smile on your face right now.  Of course, Dini gets a story in Detective #1000 he totally earned his spot!  Dini provides the humor of the issue and it is a fun story at that.  There is a low level thug in Gotham named Knute Brody.  Brody has worked for everyone and anyone he’s even been “killed” a few times.  What makes Brody stand out is that the guy always gets caught no matter the crime or the boss.  In a great twist of events, it turns out that Knute Brody is just another Matches Malone.  Almost everyone in the Bat-family has played the role at one point, even Alfred.   There are some absurd ways that Brody finds to mess up each crime he is and they get funnier each time.  This is just the perfect lighthearted story you need every once and a while and Dini is a master of his craft.

That is only the tip of the iceberg.  Christopher Priest continues one of his stories from the 80’s as is paired with Neal Adams. Brian Michael Bendis and Alex Maleev provide a fantastic Old Man Penguin/Old Man Bruce story with several tributes to 1992’s Batman Returns.

On top of that, current writer Peter J. Tomasi is teasing us with a brand new interpretation of the Arkham Knight!

Detective Comics #1000 has got you covered and will not disappoint.  I’m dying to hear what your favorite story is, sound off in the comment section below.

Well-done Mr. Wayne!  You have entertained the masses for 80 amazing years and here is to 2000 more issues! – Peter Verra