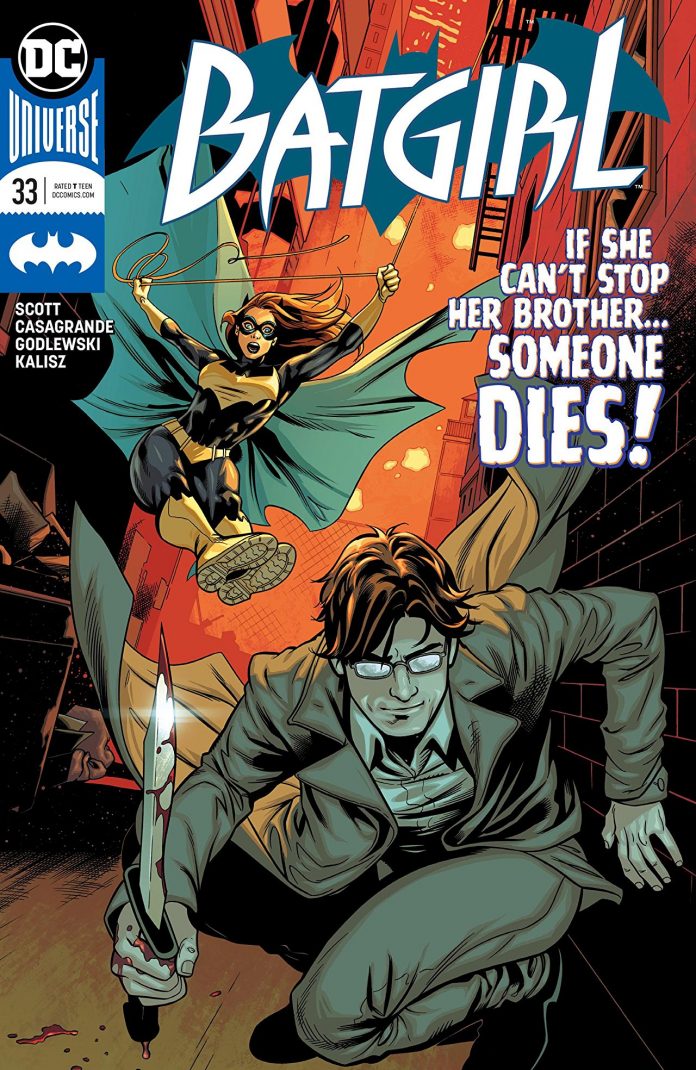 SYNOPSIS: It’s Election Day in Gotham City and Barbara Gordon is running ragged on both ends as she tries to balance campaigning for her new boss with keeping the peace as a superhero. Could the sudden appearance of her murderous brother, James Jr., push her over the edge?

This issue’s main cover by Emanuela Lupacchino, Mick Gray, and Dave McCaig is very nice, although very misleading. DC has been throwing back to the 1950s with these sensational covers complete with dialogue that, well, often does not reflect what actually happens in the issue. The variant cover from Yasmine Putri is straight-up awesome. We get a beautifully painted Batgirl in the foreground against a high-contrast cityscape in the background, giving her a very 3D look. Nothing here that’s specific to this issue, but it’s a brilliantly striking image.

So the note at the end of the last issue indicated that this would be a special tie-in to THE BATMAN WHO LAUGHS miniseries. In this issue, only the last panel explicitly ties into that crossover, while the issue as a whole just feels like the first of a new story arc for Batgirl. And based on where the story left off last month, it feels like the start of a new story dropped into the middle of another story. It’s not a big problem, but it reeks of editorial meddling.

James Gordon Jr. is back on the streets this month, which really sets Barbara off. She’s seen what her brother can do and she’s nowhere near ready to accept that he may have been rehabilitated.

She goes on a bit of a tear to find out where he is and what he’s up to, and her personal ties to the situation lead her to employ some Batman-like interrogation methods. There’s a really nice moment where Batgirl catches herself going a little too far, remembering who she is and how she operates.

I wasn’t totally comfortable with Scott Snyder’s re-introduction of James Jr. as a disturbed sociopath in “The Black Mirrorstorylinene, but he’s served as a very good adversary for Batgirl because of the complicated relationship they share and the way it destabilizes Barbara.

Elena Casagrande’s art is a breath of fresh air, and the two fill-in pages by Scott Godlewski fit right in with her style. Casagrande uses dynamic angles so that each image is interesting without coming off as 90s in-your-face attitude. This works very well, particularly in an issue that doesn’t have a lot of action. She knows when to pull the camera back to show all the elements of a scene and when to use a close-up for dramatic effect, and she has a great handle on conveying emotions in her faces.

There’s a weird moment toward the end where Batgirl takes off her mask only to deliver a line facing away from someone and put it back on two panels later, but overall, the storytelling is clear and effective in this issue.

This is a promising start to what may or may not be an ongoing story, and the artwork is the best reason to pick this one up. I’d love to see Elena Casagrande return to the pages of Batgirl in the near future! – Rob Veatch III

Yeah, Robert Pattinson Really IS Working Out For THE BATMAN