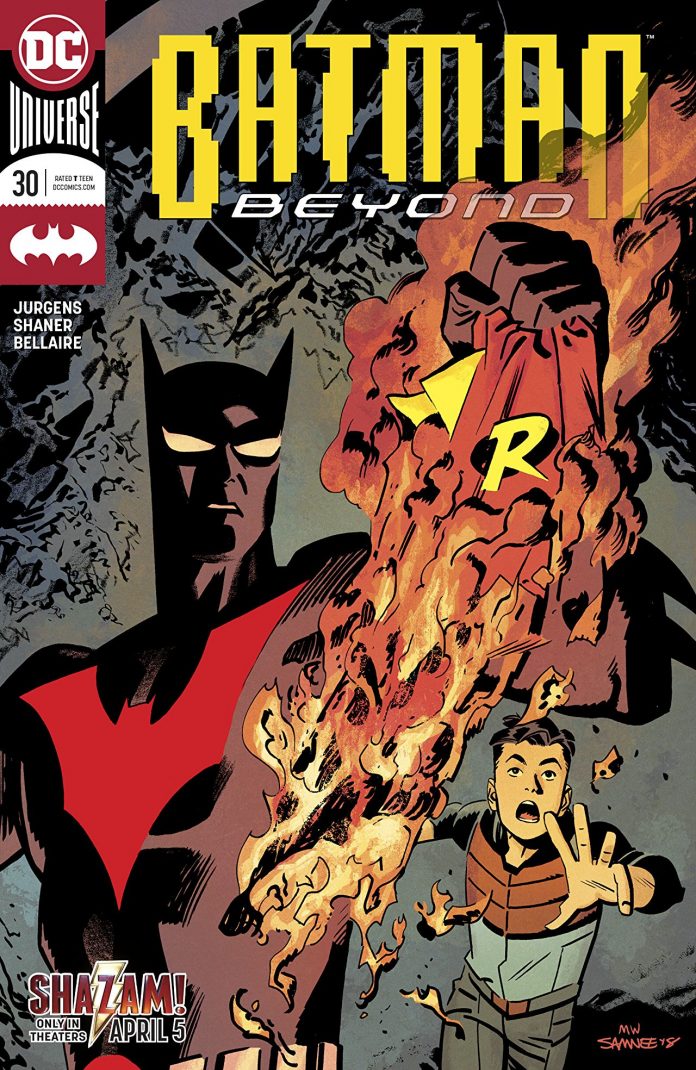 SYNOPSIS: Robin no more?! It’s a turning point for the brothers McGinnis as Terry and Matt face a tough road ahead in the wake of The Joker’s attack. But the real question is: Does Batman really need a Robin, or is it time for Neo-Gotham’s Caped Crusader to fly solo once more?

Is this going to be the end of Robin as we know him in the Batman Beyond timeline?

Weeks after the attack by (and subsequent defeat of) The Joker, concern for Matt McGinnis, Robin, is at an all-time high. Dan Jurgens throws in some more references to “A Death in the Family” and even a slight nod to the Return of the Joker animated film.

The tension between Bruce and Dick over the necessity of a Robin remains, but I’m still waiting for things to come to a head. Dick has a little extra motivation against putting a child in the fight for justice after the attack on his daughter in the last issue. Dan Jurgens continues to do a good job of writing the hostility between Dick and Bruce but I have a nagging feeling that this whole thing is going nowhere.

The action is kind of sparse in this issue, which is almost expected after some previous action-packed installments. The action that we do get is pretty good though; Dick even gets his hands dirty once more with the Jokerz.

Doc Shaner is the new artist on this issue, and while his style works, it feels inconsistent at times. Most notably, the pages leading up to the title spread felt like a different artist to me upon my first reading.

The character designs for the 4 Jokerz goonz that we spend a good chunk of the issue with are well done and fairly original. Shaner also throws some pretty cool touches into the background like a headshot on a monitor of the Joker in the style of Batman: The Animated Series.

With this being the epilogue of such a bombastic story, I expected a little bit more substance, but Dan Jurgens sets up the future with the return of a character that we haven’t really seen in the Batman Beyond Universe. – Matt Whaley