SYNOPSIS: The final chapter of the most terrifying and personal Batman mystery is here!  Still reeling from their last encounter with the three Jokers, Batman, Batgirl, and Red Hood discover the terrible truth about the Three Jokers’ plot. Will the caped crusaders have the strength needed to put an end to the maniacal menaces’ master plan once and for all, or will it be lights out for good? You won’t want to miss the stunning conclusion of Batman: Three Jokers as it completes its trajectory as the ultimate examination of The Joker and his never-ending conflict with Batman. 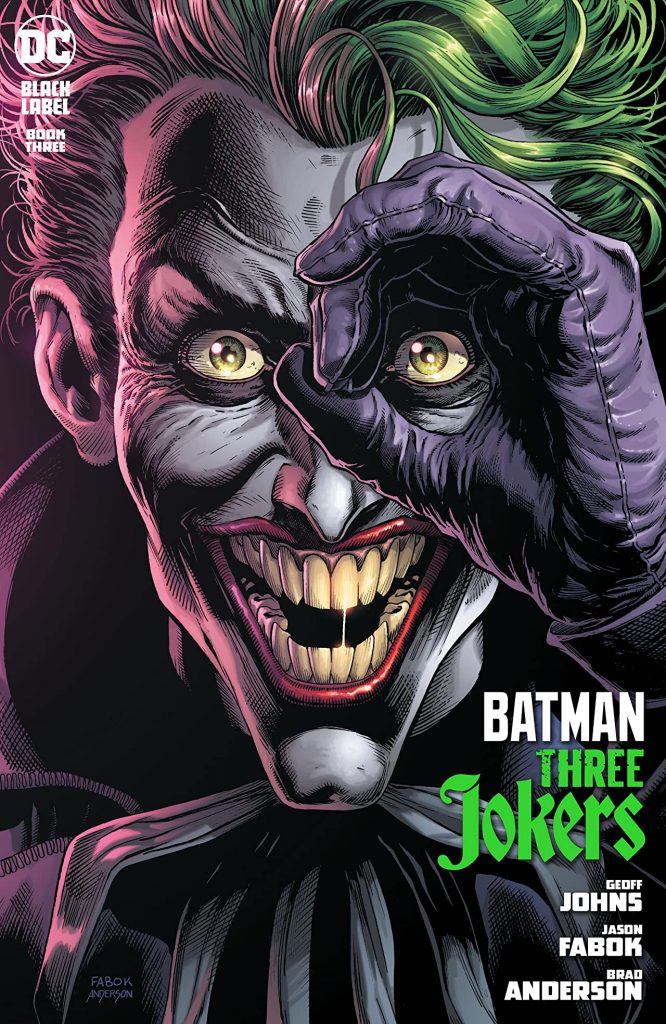 The joke’s on him.

BATMAN: THREE JOKERS #3 brings us a satisfying conclusion to the blockbuster story, placing this book as a must-own for any comic book fan.

This talented team has created a love letter to the relationship between Batman and the Joker, as well as one of their greatest stories of all time. We’ve seen action and spectacle, but at the core of these three chapters is the core of each character: the soul of a madman, against the soul of a hero.

Spoiler-free, let me set you up for the finale: with Red Hood a bit unhinged, Batman and Batgirl must join him in creating a plan to stop the murderous clown, and answer the ultimate question: who are the three Jokers?

Do we get an answer? Yes. Will fans be happy? Some. Was I? ABSOLUTELY.

Geoff Johns is a master at his craft. Here, he’s zoned in on these beloved heroes, bringing their strengths and weaknesses together to confront each other on the page. He’s also let the clown out of the box, assembling multiple versions of The Joker to zero in on those weaknesses and take advantage in clever, funny, and evil ways. In a dramatic, eerie fashion, the writer has written one of his best books yet.

Speaking of best books, what a daunting task to revisit THE KILLING JOKE. While you could read both stories separately, THREE JOKERS plays like a companion piece. We can see the nods in Fabok’s art, but the ending is a direct tie-in. I’m VERY curious to see the reaction of fans by the end (you KNOW what I’m talking about).

Speaking of art, Jason Fabok has elevated his career to A-list (if he wasn’t there already). I’ve been a fan since his earlier works on THE DARK KNIGHT, DETECTIVE, and JUSTICE LEAGUE. He’s always drawn a heroic, dark, and detailed Batman and really unique, but true, iterations of other characters. In THREE JOKERS, he outdid himself. His imagery is cinematic and beautiful, wonderfully colored by Brad Anderson. I love how emotive he’s made the cast (especially Batgirl), how haunting he’s made settings, and energetic he’s made every panel. While we all love the action shots, a great artist is measured by the smaller moments. This is an emotional story with an emphasis on drama, and Fabok sucks us in there as well. Brilliant artwork.

And a brilliant story overall.

I know I’ve been praising it since it was first released and may now be teetering on hyperbole. I don’t care. THREE JOKERS is a masterpiece. Everything clicks. The characters, the drama, the art, the atmosphere. I mean, to risk connecting to one of the most beloved Batman stories of all time, and making it work, is an incredible feat. I highly recommend those of you who have bought each book to revisit it again next month when the hardcover is released. As well as it’s read monthly, it’ll read even better collected. – Ryan Lower