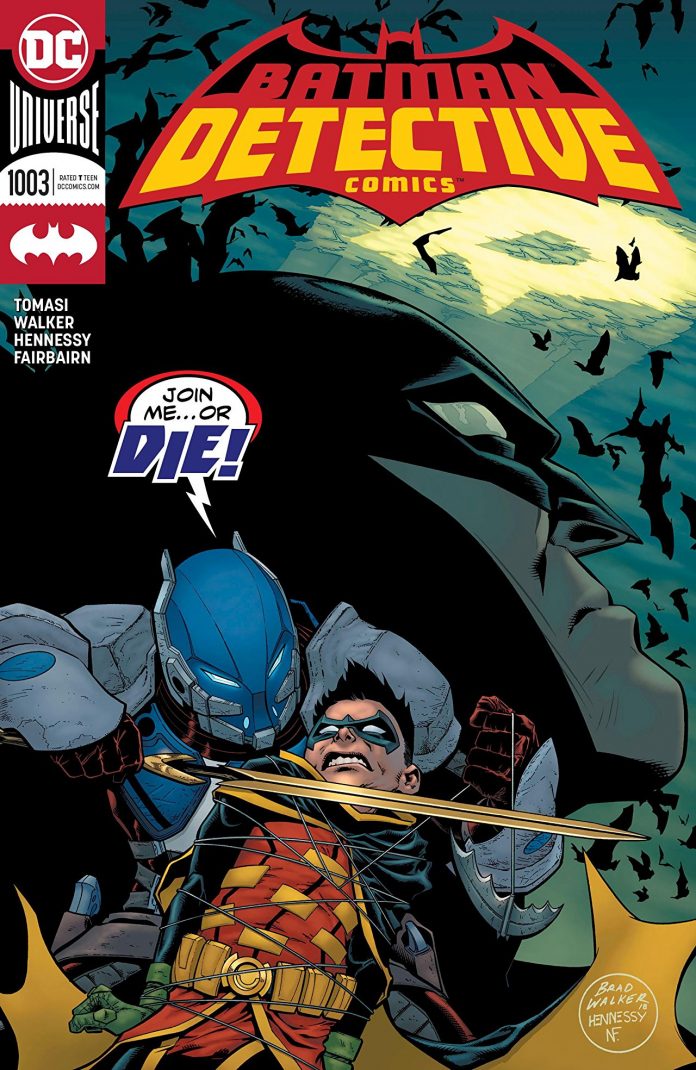 SYNOPSIS: Damian was so certain he could succeed against the Arkham Knight where his father failed-and not only was he wrong, but as it turns out, the Knight has a surprising plan for the son of Batman!

Peter J. Tomasi is on a roll!

Detective Comics #1003 is a wonderful ambitious Batman and Robin tale.  Continuing right where the last issue left off, Robin kidnapped and Batman on the hunt.  Tomasi reveals the identity of the new Arkham Knight, her back story and the Arkham fascination.  Brad Walker delivers yet again a stunningly drawn issue filled with interesting panel placement and great action.

Wow, this book is a rollercoaster ride comparable to the last issue maybe even better.  The new Arkham Knight is really something else, it’s hard to get an idea what is going on in her head and Tomasi’s for that matter.   The Arkham Knight and her band of Merry Men remind me of a better version of Anarky.  This Arkham Knight’s crew is also extremely loyal and she has a very tight relationship with the asylums inmate population. She also has her eyes on Robin and apparently a very special plan for the Boy Wonder. The motives and agenda are not totally clear, keeping the reader invested in the mystery of this new villain.

Here is where Tomasi really shines as a writer, the partnership.  After Robin’s “escape” from the Arkham Knight the back and forth between Batman and Robin is priceless.  Even the great Bruce Timm never came this close to nailing it like this.  From the rooftop scene assessing the situation to the Batcave investigating, pure joy.  I have never liked Damien this much, Tomasi really has turned him from the obnoxious brat to a tolerable teenage.  Tomasi writes his Damien a little more like Dick Grayson.  Confident, not as cocky and most importantly enjoying every minute as Robin, it’s refreshing to see.

How much is a Brad Walker commission? I need one ASAP!  Walker is so far the only artist to use landscape this often and never get a complaint out of me.  Usually, this annoys the hell out of me but Walker’s artwork is so good I don’t care, not one bit.  Robin fighting the Knights is a beautiful brutal site to behold. Arrows, flips and severed hands prove that Damien still fights like a member of the League of Assigns.  Robin dripping blood on a spotlight to while getting Batman’s attention is the best singular panel in the book. Walker delivers a great dive off a building with Batman and Robin that will please the digital lock screen crowd (myself included). Walker’s Bruce Wayne has the classic clean-cut quarterback look.  Think Clark Gable’s looks on Drew Bledsoe’s body — a throwback to the all-American male, classic Hollywood leading man.

This is the best Detective Comics has been in a long time, pre and post REBIRTH.  It feels like Tomasi is writing vintage Batman stories.  The perfect amount of Alfred here, sprinkle in some Gordon there with a handful of Robin.  The Arkham Knight’s story is unfolding with every page yet she is still enigmatic.  Tomasi leaves the reader with questions and answers about the Arkham Knight simultaneously at the end but there’s just enough of a cliff hanger to have us screaming for more.  Beautiful artwork on top of a great story what else could you ask for Batfans?  It doesn’t get better than Detective Comics, luckily for us, we only have a two-week wait for Detective 1K4! I’m already counting down the days! – Pete Verra