SYNOPSIS: Batman and Ghost-Maker go toe-to-toe to decide which of them will remain Gotham City’s hero. The city is changing faster than ever in the aftermath of “The Joker War,” and with this change comes increasing dangers as Gotham’s citizens demand that Punchline be released from prison! Plus, Harley Quinn faces certain death at the hands of Clownhunter! 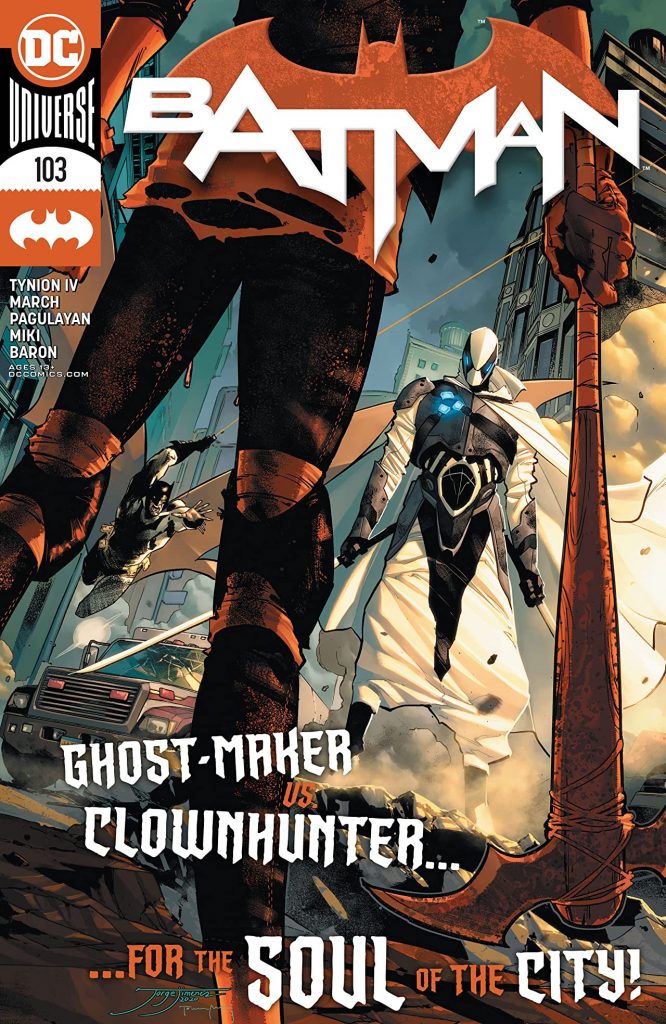 Look at the cover of BATMAN #103, and you’ll see a great tease that falls short of delivery.

It’s a Tynion gimmick I keep referencing, but I keep seeing it. Here, we see a lead up to the showdown, but then an interruption before the fight begins. However, that’s actually fine by me. These are two characters I have no connection to, so it’s a scene that ultimately wouldn’t matter to me.

But instead, we add Batman and Harley Quinn to the mix.

Though the issue doesn’t fully deliver on its promise, I still ended up having a lot of fun. We have separate scenes of action, but also some smaller moments of emotion sprinkled around it. I found myself zeroing in on Bruce’s past connection with this Ghost-Maker, therefore making me zone in a little more during their fight in the present. It’s an equal balancing act that Tynion measured out well.

As for the Harley Quinn/Clownhunter moments, let’s just say the right person won.

Art duties are a combination of Carlo Pagulayan & Danny Miki and Guillem March. While three people are contributing, everything blends together pretty well. I thoroughly enjoyed how Batman’s blue suit popped and was magnetic to the eye in every pane. The rest of the issue plays out just fine, which worked better for me here than the past few issues.

Overall, with a title that’s been a little hit-and-miss, BATMAN #103 is 20+ pages of comfort food.

That’s all right with me. I’m hungry. – Ryan Lower