SYNOPSIS: “Doom Metal” part five of five! The Legion of Doom has been freed-and now they’re turning on their saviors-the Justice League! Teeth will gnash, knuckles will be bared, and Lex Luthor will make a decision that shocks everyone, including Batman, Superman, and Wonder Woman. The ending of this epic story leads directly into Dark Nights: Death Metal #5! 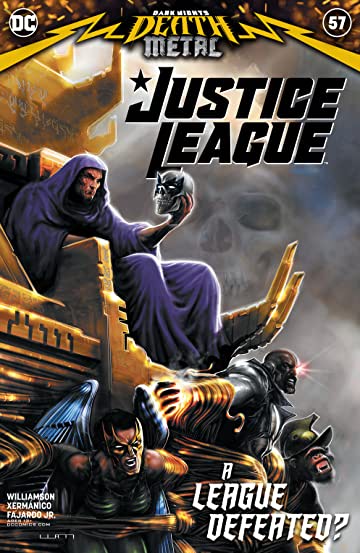 Anyway, you’re at a party talking to a friend who is going on and on about this story. You’ve almost entirely stopped listening and at this point, you’re kind of just nodding along and saying “okay, interesting” or something along those lines because you don’t want to be rude. Again, this friend is usually really entertaining, so you’re sticking around halfway to humor them and halfway to see if this is actually going anywhere, but you’re definitely panning the room and eavesdropping on other conversations.

Then something catches your ear.

Justice League #57 isn’t an amazing book. There are bits of dialogue that flat out don’t work. There are story aspects you’ve already predicted. There are characters that you aren’t really dying to have fill out the ranks of the Justice League. And somehow, I feel like that was the point all along.

Our second-string heroes, led by Nightwing, have now rescued and entered into battle with the Legion of Doom. Of course, they fight because what else are these two groups to do but be at odds with one another. And again, of course, something needs to disrupt the fight in order for us to have a story that presses a bit beyond the superficial slugfest that would leave you to eventually tell your buddy that you really need to use the restroom and refresh your drink.

The something that pulls you back before you politely make your exit in is Dick Grayson.

Dick Grayson, who has been at the side of Batman through the vast majority of his illustrious history. It’s easy to think of him as a part of the larger-than-life superhero machine. He isn’t just “The Boy Wonder,” he’s a part of the wonder itself. But what does that tell us as readers?

Justice League #57 has enough in common with the last two lackluster entries in the title that it might not be enough to justify this tie-in storyline. That would be totally fair. However, Joshua Williamson is able to find a thread that pulls the narrative back together enough for me to recommend this issue after telling you to spend your time elsewhere in my last review (check it out here HERE) The story finally has something to say and that message is that we don’t have to have everything figured out to be heroes. In fact, our iconic heroes don’t even have everything figured out, which is why there at the finale of Doom Metal the reader is able to understand just why we have this rag-tag group of lesser-thans taking up the mantle of the Justice League. It’s because these heroes choose to keep pressing in the face of adversity.

Now, that doesn’t totally make up for all of the shortcomings of the overall storyline or even this issue itself. There are still some pacing issues, predictable aspects, and a fairly weak villains in the Omega Knight, but there is a message worth reading here, and that by itself makes this reviewer cool with the fact that I heard our ol’ pal Josh out.

Overall, we finally see the heart of this story. The execution isn’t awesome but the sentiment (and art by Xermanico) is enough to make this worth a purchase if you’ve been digging what’s going on in Death Metal. – Garret Grev (@GARRETWATO)

Senior Contributor Garret Grev is a lifelong Bat-fan, a 20-year BOF’er, and officially joined the team in 2017. Garret covers comic and movie reviews and appears on both the BOF podcasts and vlogs. He lives in Minnesota with his lovely wife and their four sons. Outside of Batman and comics, Garret loves the outdoors, playing music, collecting 80’s action figures, and the MN Vikings. Garret is the co-founder of What Are the Odds? Fantasy Football. Follow him on Twitter @GarretWATO.

SYNOPSIS: One bullet robbed Nightwing of his memories and identity. One bullet erased Dick Grayson and replaced him with Ric Grayson. Now, with Dick’s true identity returned, KGBeast is back with one last bullet for him. Using Bea as bait, KGBeast has made it abundantly clear that this one last bullet isn’t intended for Nightwing’s head-this one is aiming to puncture his broken heart! 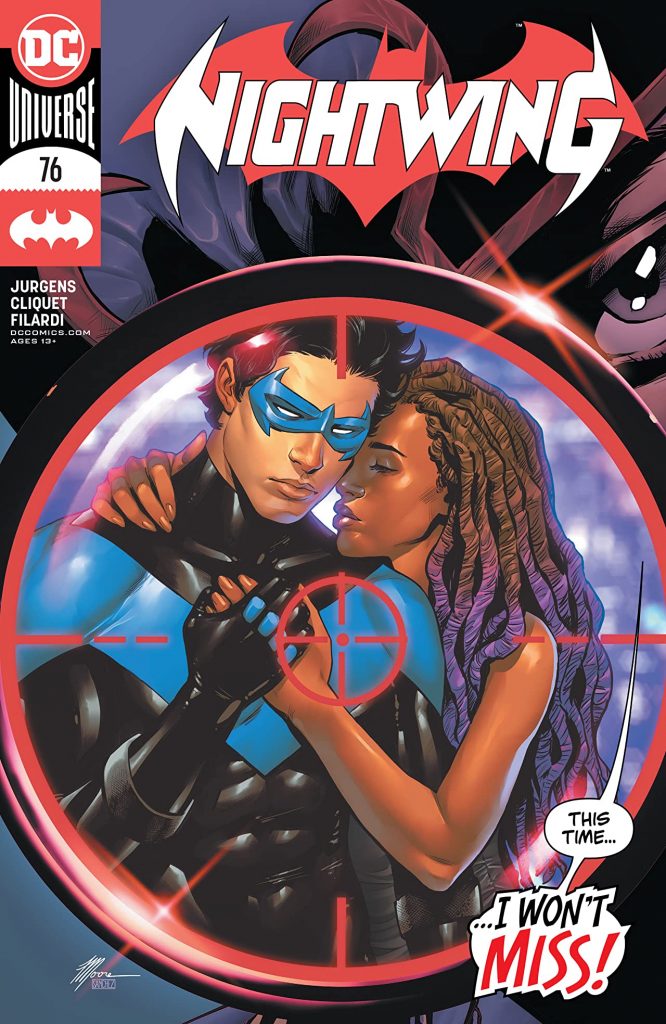 NIGHTWING #76 is a quick read that unfortunately was predictable and not very satisfying.

I avoid spoiling stories, that is the BOF way, however, I can’t pull off this review without spelling out one big plot point. If you want to go into this one just knowing the basic synopsis skip this review.

We begin with KG Beast standing before Dick Grayson and threatening his girlfriend Bea at the point of a big gun. There have been many milestones during Grayson’s recovery from the events of BATMAN #55, getting his name back and deciding to save people again comes to mind, and now getting a chance to beat up KG Beast is a swell bit of icing on the cake.

Starting with the positives, I like the way the fight plays out and that writer Dan Jurgens gives Bea a chance to show that she can take care of herself.

But it’s the art that sticks with you after you’re done. Ronan Cliquet draws up some great character expressions by Bea. Every look from frightened, fascinated to shocked are done with real precision and heart with her eyes having an almost cat-like look.

Where this issue stumbles is where it takes Dick and Bea’s relationship. We get another incarnation of a couple not being able to stay together because the girl would be in danger due to the hero being a hero. The dialogue that plays out during Dick and Bea’s conversation reads like a rethread of Sam Raimi’s SPIDER-MAN.

The decision also hits hard because Bea was open to accepting Grayson’s life behind the mask.

It could be that they were worried that a hero going forward with a relationship would be too similar to Bat/Cat. Maybe they’re going to bring back one of Grayson’s many old flames (I’m still rooting for Shawn Tsang to return). Regardless, this was one moment that I thought could have been done better. We’ll see if future issues will revisit this. – James Armstrong

SYNOPSIS: Catwoman’s going to be the top cat in Alleytown, and the first gang she’s going to make an example of is the Khadym mob…by stealing a truck full of contra-band from right under their nose! Catwoman, the Alleytown kids, the police and the Khadym mob all converge in a high-speed heist. What do you get when you mix a cat, three kids, and a truck full of contraband speeding through the streets of Alleytown? One hell of truck robbery, that’s what! 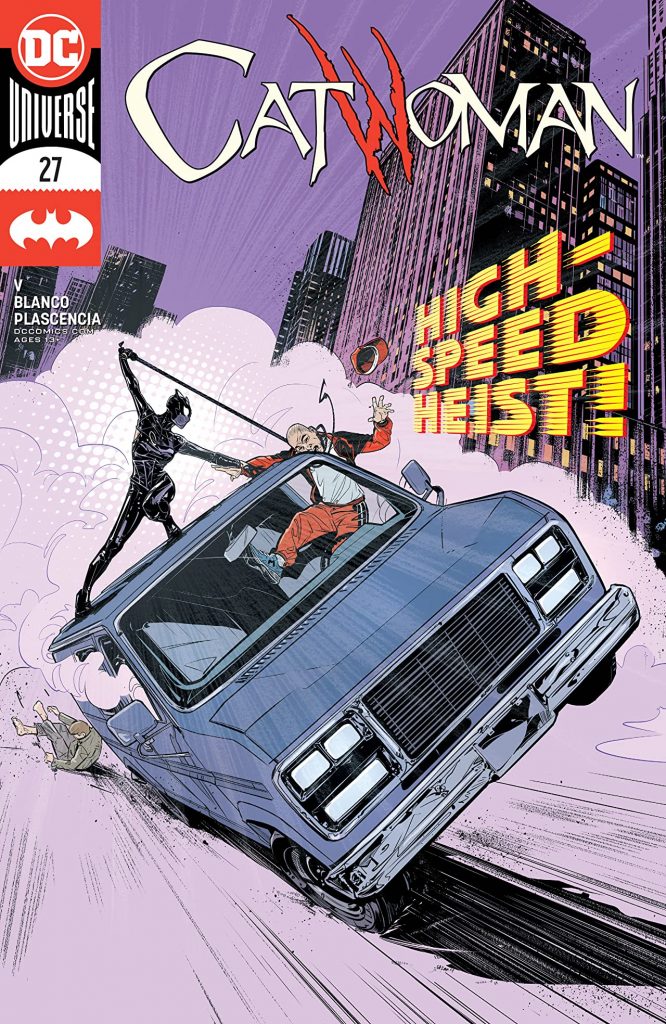 Selina’s back in Alleytown and she’s taking control of her streets.  After breaking into the mob’s body shop and securing some information, Selina is now hitting them where it hurts – a large drug shipment is being moved across town and Catwoman aims to intercept.  Little does Selina know that the assassin hired by The Penguin is still on the prowl and is picking the most opportune moment to strike…

Vroom vroom!  Writer Ram V ratchets up the action in this issue – and it’s very possible that he’s been playing a little too much Grand Theft Auto – but you know what?  I’m kind of okay with that.  This is a fast-paced, heist story that has it all – corruption, drugs, car chases, sleazy nightclubs, double-crosses – you name it.  He’s taken this book to a new, better level, and has brought Catwoman back to where she thrives.  He’s grounded the world and is delivering a straightforward, and entertaining, crime story.  I’m digging this so far.

And I have to say, the artwork this month has taken a major upswing.  I wasn’t too impressed with the pencils by Fernando Blanco last month, but he truly showcases what he can do with some dynamic layouts, cinematic visuals, and solid action.  Colorist FCO Plascencia uses a vibrant color palette to illuminate the page – the neon signage and nightclub scenes are bold and playful.  This one is looking good.

I’ll keep it short and sweet this month.  If you’re interested in Catwoman at all, now is still a great time to hop on this book.  Pick up Issue #26 if you can and then jump right into #27.  This one feels like it’s going to be a solid story overall. – John Funderburg