SYNOPSIS: Someone’s hot on Bruce Wayne’s heels, out to prove his connection to Batman once and for all! Meanwhile, Harvey Dent plans his next steps for Gotham with just the simple flip of a coin. What does he have in store for Gotham, and can Batman twist probability in his favor? 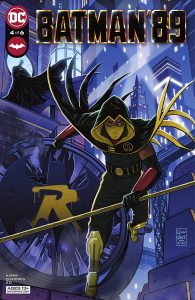 Harvey Dent is now full-on Two-Face (and he’s even set up an “evil lair”) and the GCPD is still after The Batman.  But this issue’s focus is on Drake Winston and Bruce Wayne…for the most part.  Call it, “When Robin Found His Batman,” if you will (And when you read the issue, you’ll get why I worded it that particular way).

Robin was supposed to show up in both BATMAN (1989) and BATMAN RETURNS (1992) — in fact, the part was cast for each film with Robin subsequently cut from each. Ricky Addison Reed was cast as Dick Grayson in the original Tim Burton-directed film (you can see how that would’ve turned out HERE), while Marlon Wayans was supposed to play a riff on The Boy Wonder known as “The Kid” in the 1992 sequel.  Of course, Dick Grayson/Robin finally made it into the Batman film series in 1995’s Joel Schumacher-directed BATMAN FOREVER and portrayed by Chris O’Donnell.

With the BATMAN ’89 comic book miniseries, this Drake Winston version of Robin, fans get a bit of “What If?” — though I’m sure if Burton and company had returned for a BATMAN 3, this isn’t the version of Robin we would’ve seen.

This Robin borrows a bit from his other comic book counterparts in Dick Grayson, Jason Todd, and Tim Drake, but it’s a fresh take on the character despite the influences.  I don’t know if we’ll see young Master Winston again post-BATMAN ’89, but he now has a place on the “Shelf of Robins.”

I’ll leave it for you to discover how and why Bruce Wayne has taken up a partner (or the other way around…you’ll see), but full-on “Batman and Robin” is finally coming in the next issue.

With only 2 issues left, all of the subplots will surely converge and we’ll find out how it all fits together.

Will the GCPD catch The Batman?

What dastardly plan has Two-Face concocted in his evil lair?

And will Batman and Robin stay a team in the end?

We’ll find out the answer to those questions and others as the penultimate issue is only a couple of weeks away (Yes, this was a BATMAN ’89 2-fer month). – Bill “Jett” Ramey