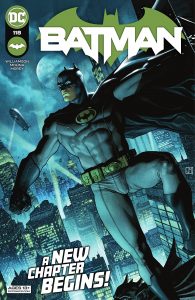 “The darkness has always been one of the greatest tools in your arsenal.”

That line of dialogue, spoken by Barbara Gordon in this month’s BATMAN #118, is so refreshing for the title and us comic book fans. Out of context, it holds true to the nature of The Dark Knight. In context, it holds weight to the awesome scene it follows.

A new creative team has taken over the BATMAN title and pumped new life into our hero. Writer Joshua Williamson lets the past stay in the past, using one page to close that chapter, and takes us in a new direction with an interesting murder mystery. Along the way, we get flashes of a badass Batman, playing to his strengths (fear, intimidation, and…well, strength) that will get us all on board for this new arc. Williamson does a masterful job of feeding us fans mini appetizers of a Batman buffet. He places him in shadows, on rooftops, soaring, and incognito, then proceeds to feed us a taste of the main course. My stomach has been empty for so long, fill me up.

Speaking of masterful, Jorge Molina & Mikel Janin team up for the art duties here, and to no one’s surprise, they crush it. I was thoroughly impressed with the ways they played with Batman at night, allowing him to slowly reveal parts of himself in the shadows, using that tool of darkness to his full advantage. The artists bring back the dark, scary Batman that has hooked us all for so long.

BATMAN #118 was the shot of adrenaline this title needed. Williamson, Molina, and Janin do an extraordinary job of giving us what we want in a Batman story while leading us in a new direction. Perfectly paced and masterfully illustrated, BATMAN is in the right hands for the future.

If you’ve been skipping the book, now is a great time to dive back in. – Ryan Lower