About this BATGIRL movie coming to HBO Max…

Though I personally don’t have much interest in it, there is one thing about it – potentially – that intrigues me: Batman.

Obviously, if there’s a Batgirl in Gotham, then a Batman exists – or at least, existed…but which Batman?

Here’s the list of the possible BATGIRL Batmen (Batmans?)…

OK, so let’s break ‘em down and see if we can come up with the most likely candidate… 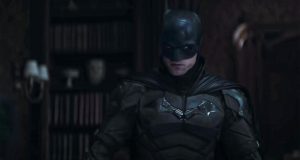 Pattinson’s Batman from director Matt Reeves’ THE BATMAN has the same odds of showing up in BATGIRL as Batman as John “Bluto” Blutarsky’s Faber College GPA: “Zero-Point-Zero.”

THE BATMAN is a standalone film set in its own cinematic universe and has nothing to do with any other live-action DC endeavors other than its own prequels, sequels, and spinoffs.  Plus, Jeffery Wright plays Jim Gordon in THE BATMAN while J.K. Simmons is Commissioner Gordon in BATGIRL (more on that in a bit). 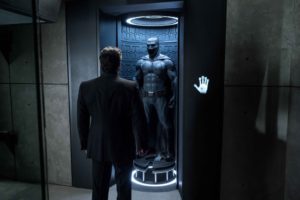 Yes, Ben Affleck has a small part in THE FLASH as his version of Bruce Wayne/Batman.  However, it’s been strongly rumored for a good while that cameo in THE FLASH will finally be the “cool way to segue out of the role” that he himself said coveted.

With THE FLASH being set in the same universe as the “connected” live-action DC films (at least in the beginning), it seems obvious that Batfleck is the Batman inhabiting BATGIRL’s Gotham – especially since the aforementioned J.K. Simmons is reprising his JUSTICE LEAGUE role of Commissioner Gordon.  BUT…

With THE FLASH essentially being a FLASHPOINT film that will reset the continuity of the DC films that “connect,” it sure as hell ain’t a certainty that Batfleck is going to keep on Batflecking after THE FLASH. 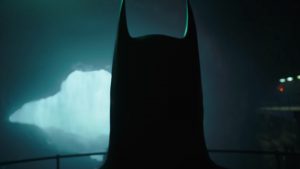 When I first heard that Michael Keaton was in talks to reprise his role as Bruce Wayne/Batman in THE FLASH, I also was told that Warner Bros. didn’t want it to be a one-off.  In fact, they were interested in MK showing up as an aged Dark Knight in other DC films – particularly in a project that would riff off of THE DARK KNIGHT RETURNS and BATMAN BEYOND.  And one of the ideas kicked around using the old Batman mentor/young apprentice, allegedly, was a Batgirl movie (Don’t believe me, it was reported in the trades as well as BOF).

Well, as I’ve previously said, we know that THE FLASH is going to mess with continuity – pretty much reboot it – and things in the “connected” DC on film universe are going to be very different afterward.  Keaton’s Bruce Wayne existing in that world as opposed to Affleck’s version of the character due to Barry Allen’s (Ezra Miller) shenanigans in THE FLASH isn’t out of the realm of possibility.  In fact, it just might be likely.

With Pattinson, Affleck, and Keaton co-existing as cinematic Batmen (Batmans?), I can’t see WB adding yet another live-action Batman simply for BATGIRL.

I didn’t list this option at the beginning of this op-ed, but if I had to make a prediction, I’ll say that whichever Batman exists in the world of BATGIRL will be mentioned but not seen.  Maybe it’s the Keaton’s version…maybe it’s the Affleck incarnation.  Let each audience member pick whichever one they want and go with the one that makes them feel better.

When one of the co-directors of BATGIRL was asked which Batman would be in the film, he said “The REAL one.”  Well, the “real” Batman varies from person to person.  Perhaps that was his coy – and smart – way of saying that the filmmakers aren’t going to pigeonhole themselves to a specific Batman on film…at least for now. (#MichaelKeaton)

Plus, it might help prevent a plethora of fanboy meltdowns on social media.

So, who do you all think is BATGIRL’s Batman and why?  Talk amongst yourselves in the comments section below.  AND…

I’ll save my “Batgirl is the successor to a dead Batman” take for a future op-ed. – Bill “Jett” Ramey

BOFSH 64 | THE BATMAN Sequel is Announced!