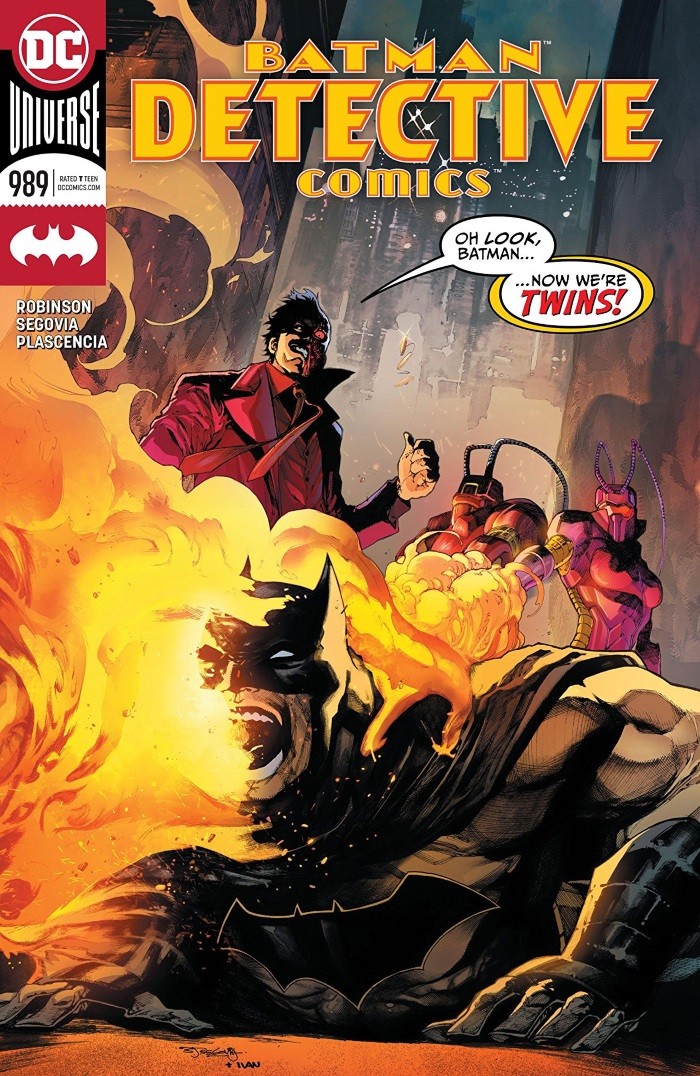 SYNOPSIS: Fighting off Tweedle-Dee and Tweedle-Dum and two versions of the pyro-maniac Firefly shouldn’t be too difficult for Batman…but the real threat comes from the fact that they’re pairs! For some reason, Two-Face doesn’t want Batman to discover the truth behind the murder he’s investigating…but what’s his angle?

Still, too often this title has been overshadowed by other Bat-books, such as Tom King’s Batman, Scott Snyder’s Dark Knights: Metal and most recently Brian Azzarello and Lee Bermejo’s Batman Damned with the launch of DC Black Label.

For Detective Comics, we now have James Robinson back in Gotham, taking the World’s Greatest Detective back to his roots: solving mysteries putting the pieces together, investigating evidence and hanging out with Commissioner Gordon on rooftops.

No more babysitting and team building—just doing what he does best: investigative detective work.

There is so much to love in this book, from Batman and Alfred discussing a murder victim who is not who he appears to be to Batman and Gordon discussing suspects next to the Bat signal.

What will catch the eye of the reader in this story are the Fireflies.

Here, Robinson digs deep into the mind of a low-level villain. If you were a fan of how Tom King reinvented Kite-Man, I believe you will love this. As I read through Firefly’s monologue you almost feel for this guy.  He wants to be a top dog in the Gotham Underground but he knows his place, he’s a realist.  We find out why he keeps up his life of crime as he considers Batman his greatest teacher.

It’s truly remarkable how Robinson twisted this while Batman does his due diligence and reappears in grand fashion, leaving the reader on the edge of his seat for that Detective Comics staple: the splash page ending that leaves us with more questions than answers.

Stephen Segovia is again our interior artist on Detective.

Overall, Segovia brings the same quality to this issue as he did to the last.  His Batcave is exquisite, complete with cameo Batmobiles from Burton, Nolan and Schumacher. If you look closely, I believe you can even see Justice League’s Flying Fox from the rafters.  The Forever Batmobile looks a bit wonky but you know what it is. Segovia has just the right amount of shadow covering Batman’s grim face at all times.

Colorist Ivan Plascencia does a wonderful job complimenting Segovia’s artwork. The book is dominated by shades of blue and grey.

The only real bright spots are those around the Fireflies and it works perfectly. The panel layout is something to pay attention to as well.  On more than one occasion you have to flip the book horizontally.  Normally, that’s something that would annoy the hell out of me, but when you have beautiful artwork like this to look at, all is forgiven.

Having Batman and Gordon on a rooftop is always a pleasure. Nothing may compare to Tim Sale and The Long Halloween, but Stephen Segovia did a hell of a job rivaling those classic panels! I’m not the biggest fan of Segovia’s Two-Face, but I was intrigued by the Firefly suits and their fight with Batman; there are lots of fun lock screens for the digital readers here.

Detective #989 does not disappoint at all. Robinson is crafting a fine mystery story and is incorporating some classic villains, along with some you may have forgotten about. He knows how to write not just Batman but Gotham as a whole. That means we get great depictions of Alfred, Gordon, and Two-Face, all while getting invested in a reinvented Firefly. Put that together with the wonderfully detailed artwork from Stephen Segovia and you’ve got yourself a must-have for your pull list.

The solo Batfans are going to eat this story up as it’s a nice change of pace from the other Bat-titles on sale. Other books may be getting more buzz, but this is going to be the best $3.99 you will spend at your local comic shop this week. – Pete Verra