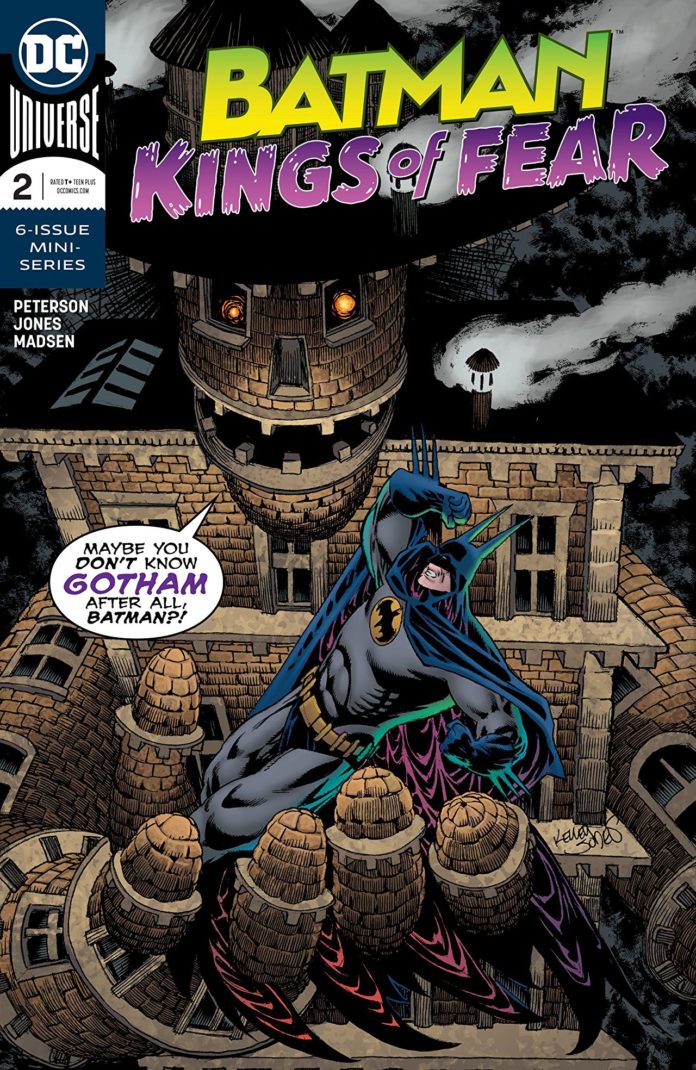 SYNOPSIS: Scarecrow is loose in the streets of Gotham City, and Batman must drag him back to Arkham Asylum! To make matters worse, he’s doused Batman with the strongest batch of fear gas in his arsenal, turning the city the Dark Knight Detective protects into his worst nightmare and enemy!

In short, the second issue of Batman: Kings of Fear (KOF) does exactly what I hoped it would: leave me wanting more for reasons other than my early childhood nostalgia.

Many of my favorite visuals in all Bat-mediums are those of Batman’s mental state when he is exposed to the Scarecrow’s fear gas, such as the amazing sequence in the Arkham Asylum video game and the BTAS episode Dreams in Darkness. The second issue of KOF is certainly no exception.

Kelley Jones’ art is magnificent, as he illustrates Batman’s hallucinations with dark, yet psychedelic overtones in a style that we haven’t seen The Dark Knight depicted in for some time.

The early 90’s drawings of Batman were visually brilliant with bright, colorful heroes and villains juxtaposed against the dark tones used for Gotham, and Jones delivers this dynamic flawlessly in KOF #2.

While the storyline does continue to play out in a somewhat familiar manner, I felt the characterization of Batman was much more intriguing than in the first issue. While simultaneously wrestling with his inner (and possibly outer?) demons caused by the fear gas, we see Batman cope by delving into his darkest personality, stalking and interrogating his prey in a most menacing, yet refreshing fashion.

The Scarecrow always causes psychological and internal torment for our hero, and watching him overcome his demons takes the kind of strength and fortitude we crave to see from the Caped Crusader.

I love this Batman.

While I dig the modern depiction of the hero, it is once again refreshing to see a more straightforward Batman rely on the shadows, his brawn, and mental fortitude more than his technology or allies.

So far, both issues of KOF have been triples, and I’m counting on some home runs the closer we get to issue #6. I certainly hope this series picks up steam, and we see more former artist/writer teams pick up where they left off!

Regardless, KOF #2 is once again a must for any Batman fan, if for Jones’ artwork alone. Do yourself a favor and skip digital for this issue and pick it up at your local comic shop. – Mance Fine