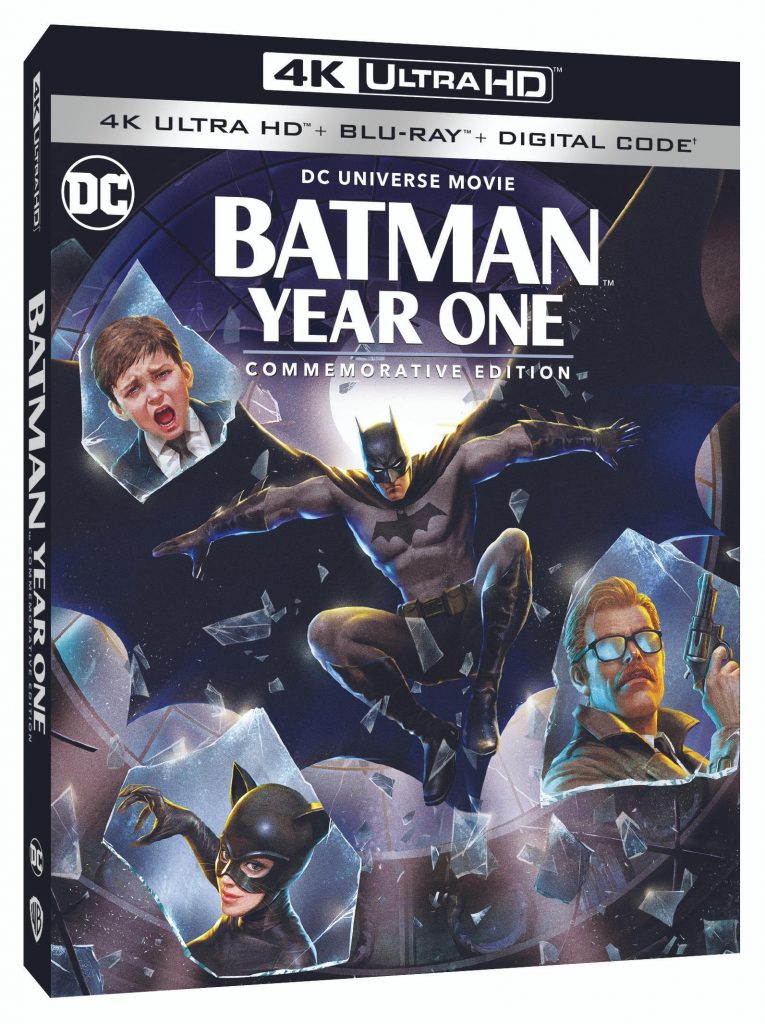 SYNOPSIS: Originally released on Blu-ray and DVD in 2011, Batman: Year One is based on the landmark 1987 DC titles from 12-time Eisner Award winner and Eisner Award Hall of Fame member Frank Miller and illustrator David Mazzucchelli. The film depicts young Bruce Wayne’s return to Gotham City in his first attempts to fight injustice as a costumed Super Hero. The playboy billionaire chooses the guise of a giant bat to combat crime, creates an early bond with a young Lieutenant James Gordon (who is already battling corruption from inside the police department), inadvertently plays a role in the birth of Catwoman and helps to bring down a crooked political system that infests Gotham City.

In honor of the 10th anniversary of the BATMAN: YEAR ONE animated film (10 years already?!), Warner Bros. Home Entertainment has released an upgraded, 4K/Ultra HD version of the movie.  And thanks to the fine folks at WBHE, I got an early look at it for reviewing purposes here at BOF.

I’m not going to re-review the film here; so if you want to know what I thought about it back in 2011, check out my original review HERE.  I’ll simply say that if you’ve read the BATMAN: YEAR ONE comic book, then you know what happens in the happened film as the latter is a straight-up adaptation of the Frank Miller-authored classic.

What I will focus on in this review will be 1) the quality of the video (the best I can as it’s not my area of expertise), 2) any “extras” that are new, and 3) whether or not it’s worth purchasing.

1) Again, video quality is not in my wheelhouse (I recommend reading this review from Blu-ray.com as they really focus on the technical aspects of the film), but I did pull out my original 2011 Blu-ray copy and compare it to the new 2021 version.  Based only on my personal eyeball test, yes, this film looks much better.

2) This new COMMEMORATIVE EDITION does include a new featurette titled “Reinventing Gordon” that’s really cool.  Essentially, it’s a short documentary detailing how the character of Jim Gordon has evolved over the 80+ years since he first debuted along with “The Bat-Man” in DETECTIVE COMICS #27 back in 1939.  The live-action incarnations of Gordon are touched upon here as well — including the latest big-screen Gordon in THE BATMAN as played by Jeffery Wright.  There’s some behind-the-scenes stuff from THE BATMAN we’ve yet to see, so that might make it worth at least a rental.

Other than that, the same “extras” that were part of the 2011 original Blu-ray are included.

3) Last but not least, should you buy the thing?

If you’re a Batman fan who wants an upgraded version of this film for your collection, yes, buy it.

If you’re a Batman fan who is good with the original Blu-ray copy and really doesn’t care if the video quality is 4K better, no.

Again, if you only want to check out the “Reinventing Gordon” featurette, rent it.

On a related note, if you want to see where BATMAN: YEAR ONE sits on my rankings of Batman comic book animated film adaptations, you can find out HERE. – Bill “Jett” Ramey

The Joker’s Got a New Main Squeeze: “Punchline”