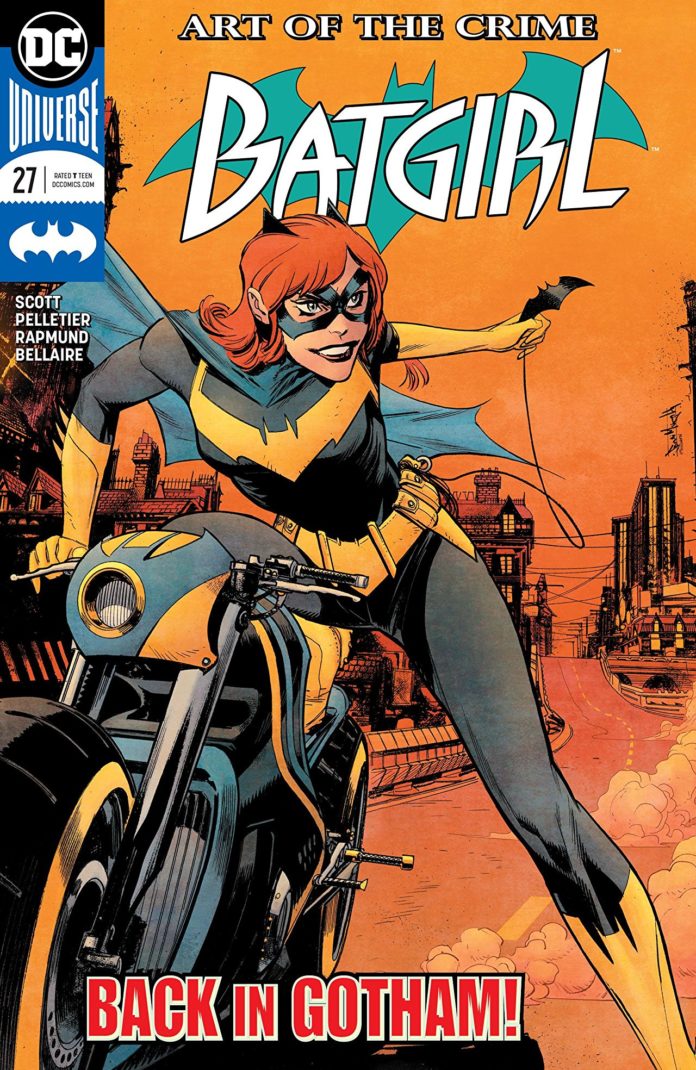 SYNOPSIS: You can’t go home again. But that’s just where Barbara Gordon, a.k.a. Batgirl, is forced to go when the chip granting her mobility keeps shorting out in the aftermath of her clash with Grotesque. Will Commissioner Gordon drive Babs totally bonkers with his bedside manner? Or will the malfunctioning tech impact more than just her legs? Plus, what’s the deal with killer art critic Grotesque and his murderous new M.O.? It’s all in part two of “Art of the Crime.”

On this issue’s cover, Sean Murphy debuts his redesign of Batgirl’s original costume, a cool spin on her classic blue-and-grey look.

I dig her regular “Batgirl of Burnside” costume and fully expect a return to that one soon, but I like this new (old) look and it’s just fun to change things up every once in a while.

Also, dang yo, Joshua Middleton delivers another beautiful variant cover, with an airborne Babs framed against a full moon in an image reminiscent of turn-of-the-century art nouveau posters.

I’m really liking this guy’s artwork the more I see of it. Inside the issue, penciller Paul Pelletier and letterer Deron Bennett shine in a really cool composition on page 2 in which we see Barbara’s distorted recollection of what just happened to her, with the tatters of her cape forming loose panel borders and a falling action dictated by the layout of the word balloons.

Onto the story at hand…

There are a fair amount of people who were upset when DC re-abled Barbara Gordon with the New 52 and essentially got rid of their only major disabled hero, Oracle (Gonna give a shoutout here to my friends’ podcast, Out of the Fridge, because they discussed this very topic on a recent episode.)

Personally, I’m having enough fun with the new Batgirl stories to be OK with it, but I certainly understand the complaint and sympathize with those who feel an area of representation has been lost.

The cliffhanger in the last issue teased a possible return to the chair for Barbara, so does this one follow through? Well, spoiler alert, no. At least not yet. She’s back up and walking within the first half of the issue, and full-on Batgirling by the end of it.

However, Barbara and her dad have a heated exchange in which she embraces her disability as a part of herself and snaps at the commish for suggesting she forget about her former paraplegia. It’s a welcome acknowledgment of this dilemma, but could come off as merely lip service if it’s not followed up with action.

Ball’s in your court, Mairghread Scott!

While not really affecting her mobility, the injury to Barbara’s implant has manifested in other neurological symptoms, and she’s definitely playing with fire by going ahead with her Batgirl activities in this condition. And while I expected her new (old) costume to come into play via flashback, Batgirl actually wears it because she’s bunking in her old room where she still has it hidden.

The last few pages tumble into another altercation with Grotesque, a shocking identity twist, and Babs getting caught in a real pickle!

Will she make it out of this maliciously manufactured misunderstanding?

Tune in next month to find out! – Rob Veatch III