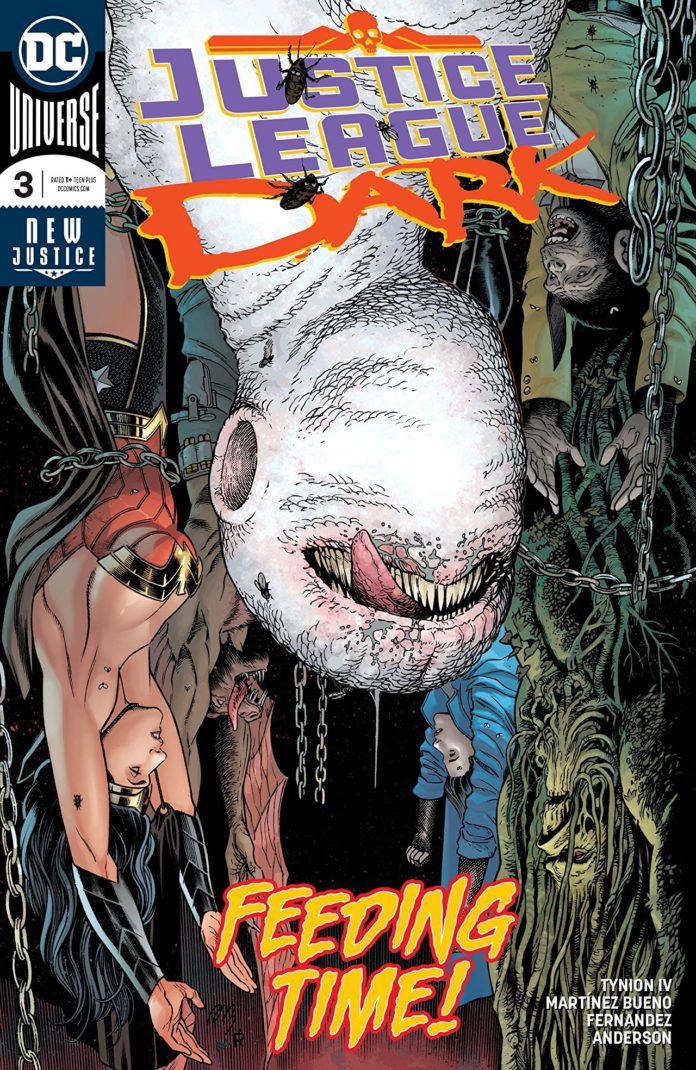 SYNOPSIS: Wonder Woman! Swamp Thing! Zatanna! Man-Bat! Um…Detective Chimp! The JL Dark team may not be strong or deep enough to stop the omnipotent Upside-Down Man from taking over our entire plane of existence. UDM takes the JLD apart one by one, but Wonder Woman might have enough mojo to keep everyone alive. Turns out Diana had a power not even she knew about that bursts to the surface, but will it be enough to turn the Upside-Down Man on his head, or is it just a lot of mystical mumbo jumbo?

The Upside Down Man is Here…and I’m a bit underwhelmed.

The conclusion to “The Last Age of Magic” picks up where issue #2 left off: The Upside Down Man has appeared, and he is hungry.

In fact, the cover of this issue says “FEEDING TIME!” and it displays our heroes suspended upside down like sides of beef in a butcher’s freezer.

And yet, The Upside Down man eats no one.

I mean, he drools a little bit, but that’s about it. The character himself, though visually striking, is a bit of a letdown after the buildup of the first two issues. He appears threatening, but we aren’t given enough time to truly know him or understand why we should be afraid of him. And his “chilling” dialogue tends to bend toward the cheesy.

But alas, our heroes must fight him! Professor Chip is liquefied (yes, you read that correctly), Swamp Thing grows to twice the height of the Tower of Fate (and sprouts a fantastic set of antlers), and John Constantine casts a spell that is too powerful for him to control (and has his demon blood forcefully ejected from his body). Though it may sound like a lot happens, it doesn’t feel like a lot happens. It may have worked better if this conflict were broken into two issues, letting it breathe a bit, instead of cramming The Upside Down Man’s exposition and all the above action into a single issue.

Yes, I was expecting more, but there is a point of high intrigue within these pages. Firstly, writer James Tynion IV continues to give us a look into the main characters as youngsters. Last month’s issue had a flashback into Diana’s past, which was one of my favorite parts, and in this issue, we get a peek into Zatanna’s life as a teenager learning magic from her father. The character beats drawn by Tynion leave me craving more backstory. I hope he continues giving us these great snapshots from the past.

But the most intriguing part of this issue arrives in its final pages. At the denouement of the action, the Upside Down Man, enticed by Diana’s tiara, reaches down to touch it, and Wonder Woman’s entire form and visage changes instantly. She explodes into brilliant white light, her eyes become glossy black, inky tears gush down her cheeks, and a strange dark emblem appears on her forehead. Untold power surges through her; a powerful magic she has never felt before.

While the art and colors are great throughout (see the colossal Swamp Thing halfway through), Wonder Woman’s transformation is where penciller Alvaro Martínez Bueno and colorist Brad Anderson soar. This is Wonder Woman unlike we’ve seen her previously, and this, my friends, is exciting.

Despite my criticisms about the villain and the overall pace, this books yields something new for the eyes – a fresh and striking image of Wonder Woman – and and I’m very much interested to see where things go from here.

Next Month: The Witching Hour…until then! – John Funderburg