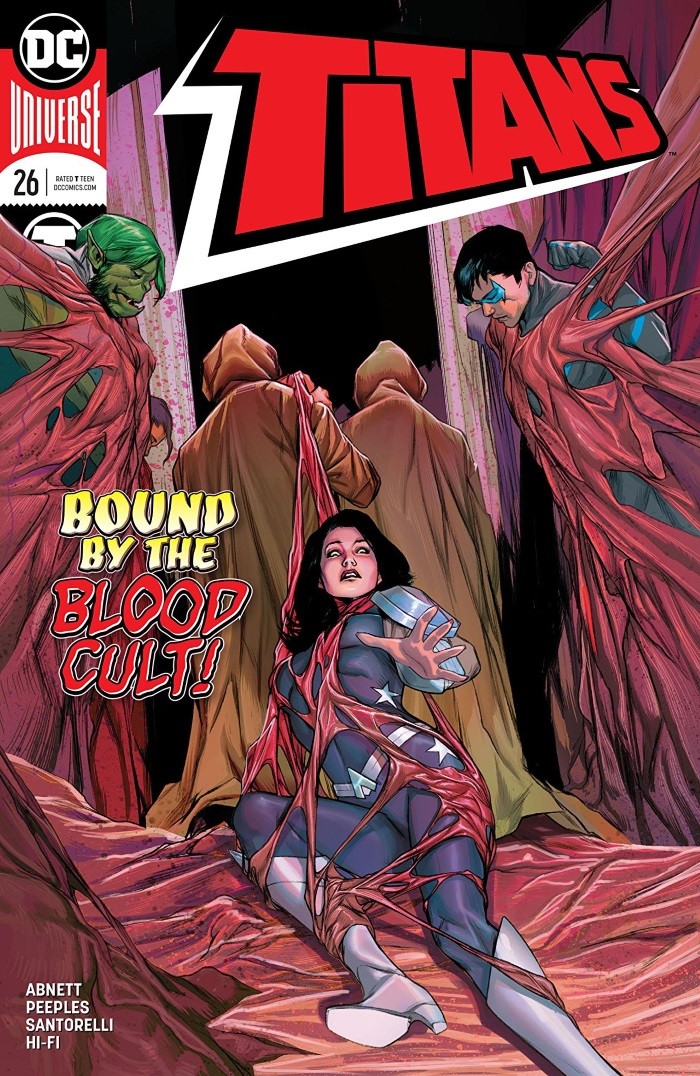 SYNOPSIS: Spinning out of events in issue #25, Donna is on the trail of the newly revitalized Blood Cult, whose evil experiments have transformed an entire town into bloodthirsty zombies! Plus, Miss Martian must wrestle with her own inner demons before she completely loses control!

“Blood Will Flow” is the, on the nose, title for the latest adventures of our new Titans.

Again, the Titans are investigating another emergent energy event, this time in a tiny town that appears to have no people in it. The Titans are attacked by mindless red monsters, monsters that don’t appear to be caused by the energy event. With the help of Ben Ruebel, the tech they picked up last issue, the Titans are able to defeat the monsters, who turn out to be made from the blood of the dead townspeople. The Titans know the Blood Cult is aware of emergent energy, and they know how to weaponize it.

I won’t bury the lede, I’ve been lukewarm on this series since the new direction was introduced, and that continues this month. There’s not anything that really pops off the page in this series so far. They have done a good job of setting up the purpose of these Titans, they go so far as have Beast Boy make the proclamation at the end of the book, but the rest is just there (while we’re on the subject of Beast Boy, I’m not a fan of the “emergent effect” on him. He grows into a huge hulking beast when he’s not concentrating. The way it comes across, he looks like the child of two characters from the other comics company).

In large part, I think this happens because the books is still feeling out these characters and how they are going to interact as a team. With the overall mission, upcoming team turmoil, future foes, the potential is there, but I’m just waiting to get there. I don’t really care about the action as it occurs.

Take Miss Martian. She has the secret with Martian Manhunter, and now she gets another as Ruebel finds out that she’s really a White Martian. The idea of her mysteries work because she is the only member added to the team reluctantly. The secret with Martian Manhunter is ripe with opportunity, because it plays into Nightwing’s doubts about her being on the team. Adding the White Martian angle I’m less keen on. This seems to be the only angle taken with this character over and over and OVER again. It’s amazing this has been done so much when the character is only a little over ten years old.

Don’t get me wrong, it’s not all bad here. My worry about “freak of the week” gimmick was lost this week in favor of furthering story points with the Blood Brood (even though we didn’t see it, knowing that they murdered an entire town and attacked the team with their blood is macabre enough to truly feel like a threat, and they now tie into the emergent energy mission as well).

Also, this is the first time I really felt like they were a team, a young team, but a team nonetheless. As we get used to these characters together, I think that team dynamic will only get stronger.

The series has potential, there are some growing pains holding it back right now. This should be a fun run when it is all realized, here’s hoping. – E. Chad Metz