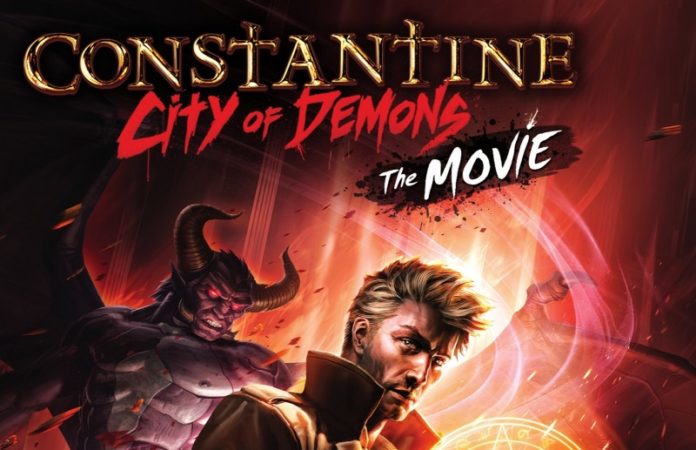 SYNOPSIS: A decade after a tragic mistake, family man Chas and occult detective John Constantine set out to cure Chas’s daughter Trish from a mysterious supernatural coma. With the help of the mysterious Nightmare Nurse, the influential Queen of Angels, and brutal Aztec God Mictlantecuhtli, the pair just might have a chance at outsmarting the demon Beroul to save Trish’s soul. In a world of shadows and dark magic, not everything is what it seems, and there’s always a price to pay. The path to redemption is never easy, and if Constantine is to succeed, he must navigate through the dark urban underbelly of Los Angeles, outwit the most cunning spawns of hell, and come face to face with arch-nemesis Nergal – all while battling his own inner demons!

“No price is too high when it comes to my little girl.”

“Tell me that after you’ve paid it, mate.” 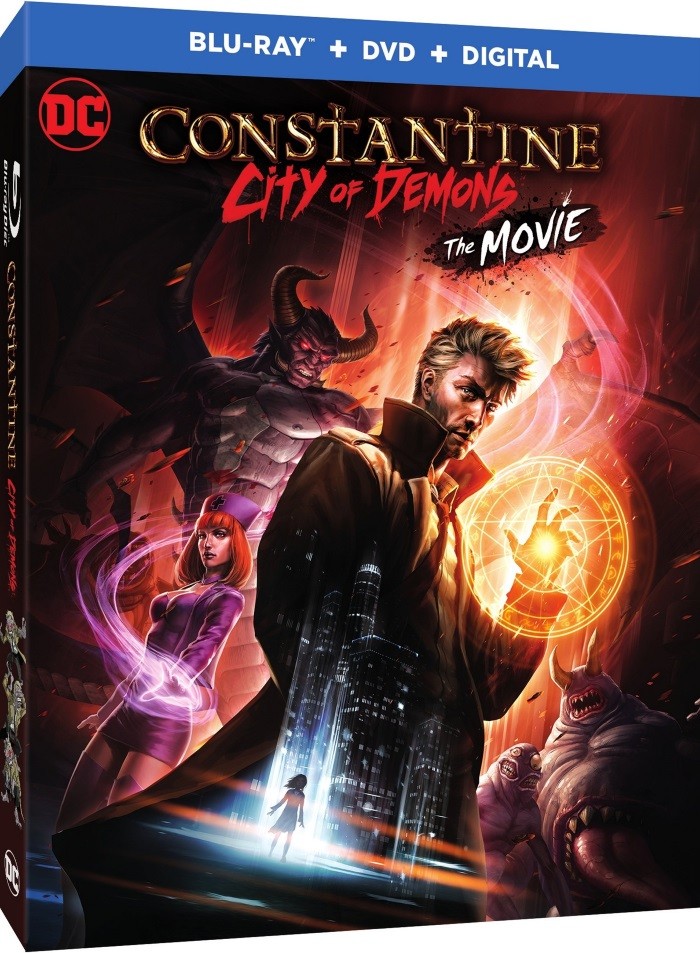 When John Constantine learns that the daughter of his childhood friend Chas has slipped into a mysterious paranormal coma, he and Chas travel to Los Angeles (City of ANGELS…get it?) to face off with the entity Beroul, a demon who has Chas’ daughter locked up in a rather frustrating enclosure.  Beroul spends his evenings hosting malevolent parties, producing silent film-era snuff movies, and using coma victims to power his wicked schemes.  Yet there is even more to Beroul than meets the eye…

Constantine: City of Demons hits shelves (and digital libraries) at just the right time – Halloween season.  It’s creepy, dark, and clever; I could see it becoming a perennial watch for fans of these characters.

Director Doug Murphy and writer J.M. DeMatteis keep everything neat and tidy with a tight plot and a slim cast of characters.  Strong themes of self-sacrifice, redemption, sins of the past, and inner demons (literally and figuratively) are used effectively, offering a more emotionally-compelling story than most of the DC animated films I’ve seen recently.  Constantine’s character is drawn richly as a man guilt-ridden over his past mistakes who puts his body and soul on the line to ensure history isn’t repeated.

Coming alongside Constantine is a familiar face that I was very happy to see: Asa, the Nightmare Nurse, who gets some well-deserved screen time.  She is the ideal, strong female to act as a counterpart to Constantine, and their partnership throughout the film is organic and complementary.  But what pleasantly surprised me was the relationship between Constantine and his friend Chas.  Though one would think that the story’s obvious emotional crux would be a father attempting to rescue his daughter, the true heartbeat of his film is the friendship between these men who grew up together and must rejoin as adults to confront the forces of evil.

But none of these character beats would work if the voice talent wasn’t so marvelous.  The cast assembled to bring these characters to life is superb.  Damian O’Hare is wonderful as Chas Chandler, Laura Bailey is powerful yet emotionally-distant as Asa, and Jim Meskimen absolutely kills it as the disgusting demon Beroul.

But the real star of the show, of course, is the inimitable Matt Ryan, the voice of John Constantine.  I’m thrilled that he is able to return once again to the world of dark magic and breathe life into our favorite chain-smoking sorcerer con man.  He continues to nail this role, and I hope he is able to return again and again to reprise it.

So we have a good story, great casting, and to top it all off, the animation is excellent – action sequences are fluid and well-constructed, colors are deep and lively, and even though it is a dark film, when moments of illumination arrive, they really stand out.  Each time Constantine casts a spell or lights his cigarette, the screen positively shimmers.  My favorite sequence arrives halfway through the film when Constantine enters a seedy bar called “Guadalupe’s.”  Neon lights flicker on the walls, and the glow of Constantine’s lighter heavily accentuates the light and shadows onscreen.

And speaking of shadows… If the subtitle “City of Demons” or the R-rating wasn’t clear enough, I’ll put it plainly: this movie is NOT for the kiddos.  People get ripped in half, necks are snapped, heads severed, a crowd of people is mowed down and dismembered by a demon, corpses fill a swimming pool to its brim… and those are just a few of the grisly encounters that await within the first half hour.  Also, Constantine drops a magical f-bomb.

Previous R-rated installments of the DC animated films have felt like they were straddling the line between PG-13 and R.  Make no mistake: this movie dives deep into its mature rating.

Overall, this is a good, well-made movie.  I felt pulled into the mystery right away, and the pacing never felt sluggish.  And with an emotionally-complicated yet satisfying ending, what more could you want?

The only caveat I would leave you with is that this movie certainly isn’t for everyone.  Squeamish moviegoers, and perhaps even the casual DC animated film collector, may want to consider renting this before buying.  It dives into some pretty twisted territory. – John Funderburg