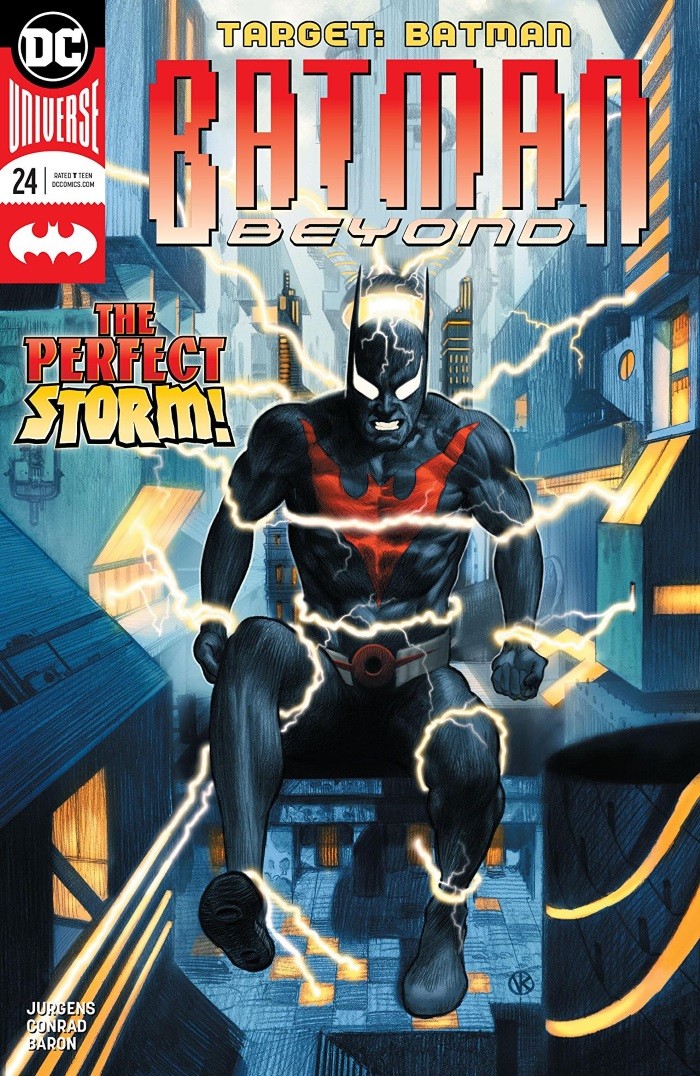 SYNOPSIS: Bruce Wayne gets to creeping around with his old cohort Jack Ryder (a.k.a. the Creeper) to thwart the Scarecrow’s attack on Neo-Gotham. But will they be in time to stop Batman and the new Robin from pummeling each other to death? Out of costume, Terry McGinnis must choose between two women who’ve stolen his heart. Who will win the hand of the Bat-chelor? Find out in the conclusion to “Target: Batman”!

Thanks to the former Creeper, Jack Ryder, we discover that the current Scarecrow is Adalyn, who as a child witnessed her father being beaten to a pulp by the original Batman (Bruce Wayne) and has carried those feelings of fear and resentment with her ever since. As a means of revenge, Adalyn devises a plan to turn all of Neo-Gotham against Terry by subjecting them to weeks worth of subliminal messaging through audio and video signals using the A.I. cubes that most citizens have in their homes. Coincidentally, Melanie Walker, aka Ten of the Royal Flush Gang and one of Terry’s love interests, doesn’t have an A.I. cube. As you’ve probably already guessed, Melanie joins the fight on the side of good as she tries to atone for the wrongdoings of her past.

Will Conrad’s art is gorgeous. He strikes a nice balance in the Robin costume between keeping a quintessential “Robin” look, while also adding in just enough new touches to link it to Terry’s futuristic suit. It also bears a bit of a resemblance to the Red Robin suit from the New 52 Teen Titans. Conrad’s attention to detail is commendable. He’s consistent to the point that you can follow citizens from panel to panel, and in his backgrounds you’ll be hard pressed to find anything out of place.

As far as the writing goes, Dan Jurgens does a good job for the most part, but I feel that Melanie being unaffected by the fear signals and jumping in to save the day is a little bit of a cop out and predictable. Continuing Adalyn’s backstory from last issue, it’s refreshing to have a new character with a sympathetic past take over as such a recognizable villain. It’s a nice touch to have Ryder reiterate to Bruce that Batman caused her to become what she is and that Batman accomplished exactly what he was “designed to do.” Ryder’s increasing cynicism toward Bruce looks like it may come back in the future which could make for some very good storytelling.

With a few changes –like Terry taking a more central role in this issue –I feel like this particular issue could have been much better. That’s not to say it’s bad, but in a Batman book, you don’t usually want Batman to take a backseat to a masked character (Ten) that you’ve only seen in a handful of panels. – Matt Whaley