EDITOR’S NOTE: In June of 2007, I had the honor of visiting the Chicago set of THE DARK KNIGHT. Today’s report is of the conversation with Aaron Eckhart, who plays Harvey Dent in the film. 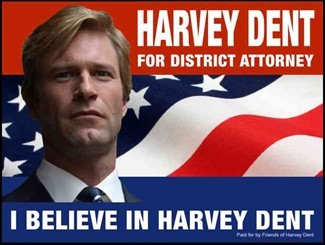 Aaron Eckhart was a heck of a choice to play doomed Gotham District Attorney Harvey Dent. Although he was never rumored for the part, the announcement of his casting led to an almost unanimous thumbs up response amongst the citizens of Batman Nation.

Aaron was not scheduled to be on the set that day, but being the nice guy that he is, he made his way over to the Old Post Office to visit with us.

So, what made Eckhart take on a role that had been played, well, disastrously just a little over a decade ago by Tommy Lee Jones in BATMAN FOREVER? “You know, to work with Chris [Nolan] is a huge, if not the main reason. The cast is amazing. [Even though] Batman has such a history and is a worldwide phenomenon, it wasn’t the prospect of being in a huge juggernaut. It was more for the artistic and creative aspects of the movie.”

Right off the (ahem) bat, Eckhart let something slip was not known publicly… 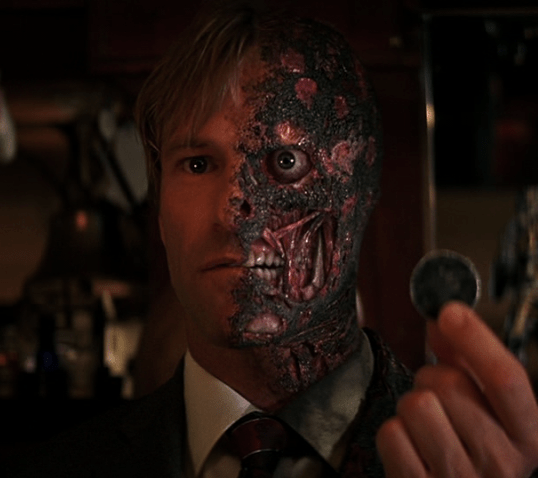 “Harvey Dent turns into Two-Face in this movie,” said Eckhart after getting an OK nod from the film’s publicist. He also revealed to us that he’s already shot scenes as Two Face. “Yeah, I have done scenes as Two-Face and it’s, uh, interesting (laughs).“ So what’s he look like? “I won’t tell you exactly what we’re going for here, but all of today’s technology is used to create this character. He’s going to be, well, interesting (laughs).”

In the comic books, we know that Harvey and Batman are partners, and that aspect of their relationship is indeed portrayed in THE DARK KNIGHT. But what about Harvey’s relationship with Bruce Wayne? I told Aaron that I get the impression that Harvey wouldn’t care for “Playboy Bruce Wayne” very much. “You probably have a point there (laughs). It’s a very good question…and that question…will be answered (laughs) in the movie!” He continued, “I think that there are dynamics that are being shown because the citizens of Gotham and law enforcement don’t know that Bruce is [Batman]. So there is a marked difference between how Bruce is treated and how Batman is treated.”

But again, what about Dent’s relationship with The Batman? “I can only say that the two of them are contemporaries, and you can make your own conclusions about what that means. What they want for the world is not totally dissimilar. One has taken it to another level, but who says that the other one doesn’t want to take it to that level as well, the power that comes with their jobs and responsibilities.” 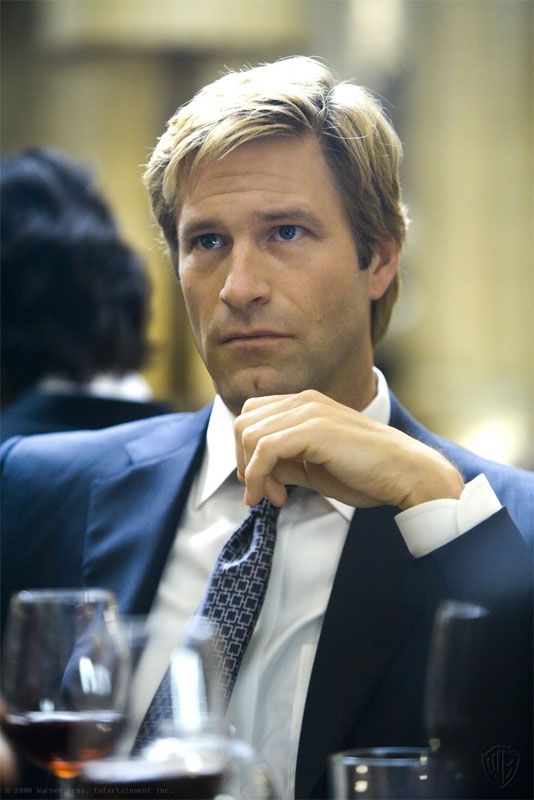 In regards to his portrayal of Two Face, Eckhart said the following, “I think Harvey Two Face is not such a bad person. He does bad things but [there are] reasons why Two-Face is doing what he’s doing.” When asked if Two Face a vigilante in TDK as opposed to the standard crime lord, Eckhart said, “You’re always trying to improve your lot in life. I think Harvey Two-Face has a code and his code is killing people for reasons that will remain secret (laughs).”

Eckhart continued to talk about Two Face, kinda sorta defending him. “Obviously a guy who goes out and murders people — that’s vigilante justice really. But I think knowing why and how he got there and that he was a cool dude before is important as well.”

Although Heath Ledger was not in Chicago the day that we visited the set, Eckhart had one thing to say about Ledger’s portrayal of The Joker. “I’ll tell you guys what…The Joker…what Heath is doing is going to blow people away.”

Anything else you want to tell us about THE DARK KNIGHT Aaron? “You know guys, the less I see [around here] the less I have to lie about (laughs)! – Bill “Jett” Ramey