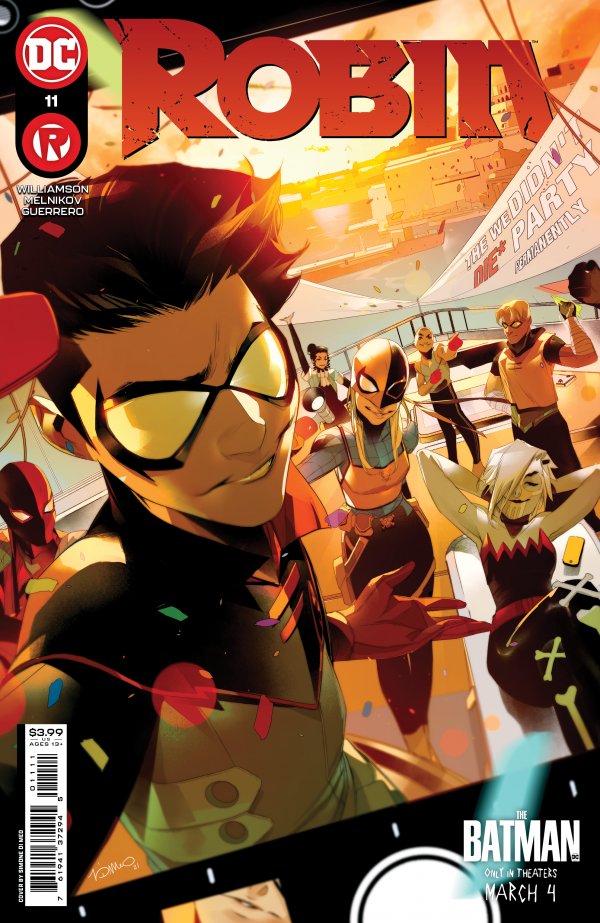 SYNOPSIS: They survived the League of Lazarus tournament! Damian, Flatline, Ravager, and Connor Hawke celebrate with the rest of the fighters, but their party quickly turns into another deadly fight! Secret crushes are revealed, hearts are broken, and Hawke has one last confrontation with an old enemy before he can return to his former life!

Artist Gleb Melnikov returns to the book in the aftermath of the tournament and while it may seem like things are cooling down this issue, Williamson has quite the opposite planned!

With the confrontation between four different generations of al Ghuls quickly shut down, Robin and his friends go their separate ways in an effort to track down Master Dusk, who has fled to Corto Maltese.

Characterizations are so strong this issue, with the relaxed pace letting moments breathe. Talia’s shock at her son using the term “friends” and it actually being true is something this book has been quietly building towards all year. The fact that not only is Damian insisting on no killing during battle, but trusting people like Flatline, who literally ripped his heart out and killed him in the first issue, speaks to how far he has evolved under Williamson’s pen.

Speaking of hearts, Flatline seems to be working her way into Damian’s, too. While I mentioned trust above, I wasn’t just referring to it on the battlefield. Damian is letting her in emotionally as well, confiding in her as to why he has been carrying around a manga all series.

The simple reason is that it’s his own thing. So much of his life is based on his parents and their expectations of him and with this manga that he found, he has something to enjoy free of their influence. It serves as a reminder of how lonely Damian has been for most of his life, forced into roles not originally his own.

To say Damian’s debut in Batman #655-658 was abrasive to fans back in 2006 would be an understatement. However, writers like Grant Morrison and Peter J. Tomasi built on that inauspicious start and slowly added layers of depth to the character and Williamson has added upon that foundation here. Williamson finds himself in a similar situation as Mark Waid when he first came on The Flash. Post-Crisis on Infinite Earths, Wally was thought of as a jerk. Waid didn’t throw the baby out with the bathwater, instead slowly giving Wally challenges and obstacles in his personal and heroic life that allowed him to grow into the hero he came to be. I feel Williamson is on the same trajectory here. I am fully in Damian’s corner now and want to see this kid succeed.

Melnikov’s art is such a good fit for this book. It carries a youthful energy and exuberance. To make another comparison to the Flash corner of the DCU, it’s akin to Humberto Ramos on Impulse, perfectly capturing the tone of its young protagonist. Would it work on the main Batman title? Maybe, but not as well as it does here. I continue to get a kick out of his two-page spreads when it comes to the fight scenes. It’s not something I see a lot of in other books and feels unique to this iteration of Robin.

There are quite a few secrets revealed, it’s just not all of them are to the audience. I still have no idea who Respawn could be as I’m not up to date on the Deathstroke side of things, but Williamson provides the vaguest of clues. Perhaps a die-hard fan could deduce their identity based on Ravager’s reactions.

The big shock was the last page for me. All I will say is that Williamson has me completely hooked on where we go next. My initial hype level for the upcoming Shadow War wasn’t that great. It feels like Batman and Deathstroke have had a few battles recently, but with the various Leagues in disarray (that’s Shadows/Assassins, not Justice) and what Damian has in mind for his return to Gotham, well, I am beyond excited for what 2022 potentially has in store for the Bat-Family and the DCU at large! Make sure you don’t miss it! – Javier E. Trujillo