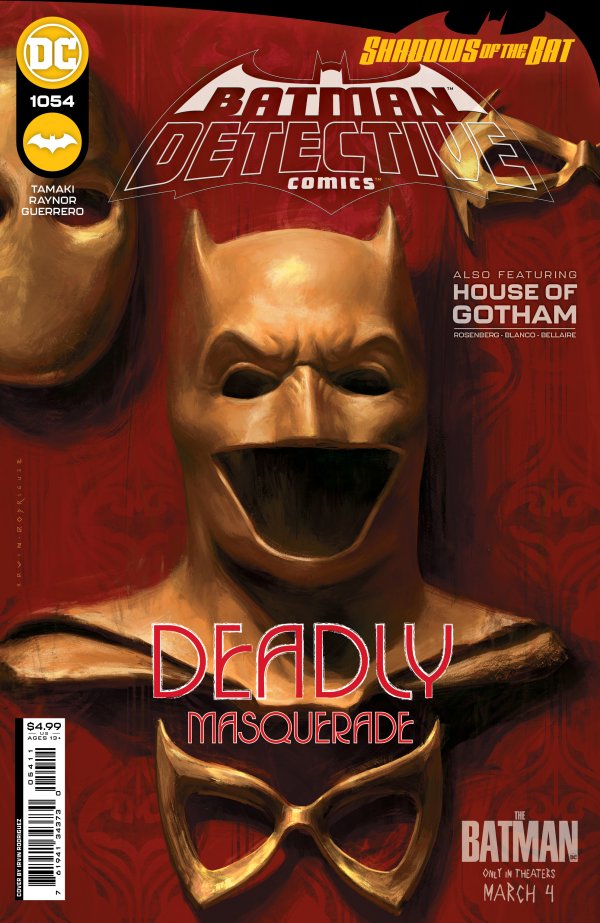 SYNOPSIS: It’s Nightwing versus Psycho-Pirate in the grand finale of “Shadows of the Bat” act two of three! As Gotham’s elite gather to celebrate the formal opening of Arkham Tower, Dr. Wear’s secret weapon is more unhinged than ever, and the storm clouds of disaster gather above the city’s monument to reform! The Party Crashers, the Bat-Family, Penguin’s forces, and a tower full of innocent civilians and villainous patients converge in the chapter you’ll need to see to believe! Spoiler alert: not everyone makes it out alive! Every story has two sides, and as much as Batman has reached out his hand through the darkness to try to help the Boy, there are too many hands in the shadows of Gotham pulling in the other direction. The finale of act two of “House of Gotham” poses a stark choice: Live with the family you know, or betray everything you’ve learned to be true?

If someone had told me that Detective Comics would have gone eight issues in a row without Batman, and I wouldn’t miss the Dark Knight at all, I would have said you were crazy.   Well, here we are!  Part eight of Shadows of the Bat, led by writer Mariko Tamaki.  The tale started slowly but has picked up after the first three issues.  This issue will feel very familiar to the reader, oddly familiar.  Artist Max Raynor does supply more than enough eye candy to please readers, but it comes with recurring problems.  Meanwhile, Mathew Rosenberg has crafted one of the most heartbreaking tales ever to take place in Gotham City, and it is the backup story.

I stand by my earlier statement; I am not missing Batman in this story.  Nightwing, Oracle, and Batwoman do a fantastic job picking up the slack in their way.  Nightwing gets Huntress to do the dirty undercover work, Oracle behind the scenes as the genius tactician, and Batwoman infiltrating the enemy stronghold and dealing face-to-face with government officials.  Sprinkle in the Batgirls and Huntress, and there is more than enough vigilante justice in Gotham City to go around.

Detective Comics #1054 is an issue with solid character moments, but they feel a bit too been there done that.  Nightwing and Psycho-Pirate go toe to toe in a battle of mental wits, but it does feel like we have just been here with Psycho-Pirate and Huntress.   Recently we have seen Psycho Pirate lose control of Arkham Tower in issues #1051 and #1052.  The situations are a bit different.  All of Gotham has its eyes on Arkham Tower in this issue, and it’s not an incident that can be swept under the rug.  The media and the Party Crashers are present almost like combining Die Hard and Total Recall (1990) elements to the book.  While the reader might have a bit of déjà vu while reading this book, you cannot overlook the impressive mental strength of Nightwing or how incredible it was seeing an undercover Stephanie Brown kick some ass in her civilian attire.  The tale does have a very impressive ending.  Arkham Tower is sealed shut, the nuts have taken over the nuthouse, and Dr. Ware might be on his last life.

Max Raynor and Luis Guerrero are artist and colorist, respectively.  Raynor’s art is on par with what we have gotten in the past few issues from him.  Raynor sells the desperation and tension in “negotiations” between Ware and Penguin.  Raynor deliverers some lovely fanservice when we see Penguin chomp down on a raw fish like he is DeVito.  The scenes with Nightwing and Psycho-Pirate are just as tense.  As Psycho-Pirate tries to take over his mind, the lighting and swirls in the background are captivating as Guerrero compliments Raynor so well.

Now I do have some gripes that I can’t help but notice.  I have seen that Raynor and Guerrero are not the cleanest combinations since they have teamed up.  There are two mistakes in the tunnel fight early in the book.  When the Bat-fam is dodging gunfire, you can see that Cassandra’s Bat-logo is colored completely instead of black with a yellow stroke.  Then the next page, when the Batgirls are taking down the Party Crashers, Raynor’s art looks a bit clunky.  When Spoiler takes down one of the thugs, it does look like Spoiler is flying through the smoke; legs flailing in the air, cape flowing behind.  Both characters have purple color schemes, which doesn’t help much either.  These little details can be annoying to comic readers, and it’s not the first time with this team that something like this has happened.

Don’t let those two incidents make it seem like I’m not too fond of this creative team.  They do work very well together.  The panel layouts are easy to follow, the splash pages are filled with as much detail and color as any other panel, and the action is as glorious as it is brutal.  Raynor does a beautiful job of displaying emotion throughout the book.  Fear, anger, concern are all there, and you would be able to get the vibes of the scene without any word bubbles.

“House of Gotham” once again outshines the primary.  Mathew Rosenberg is a man on a mission, and that mission is making our hearts bleed for one of Gotham’s unfortunate children.  We finally get an idea of when this tale takes place during Knightfall.  Bruce Wayne has been keeping an eye on Gotham’s favorite redhead.   When the young boy goes unaccounted for after Bane’s attack on Arkham, Bruce sends out Robin to find and help the young boy.  Once again, this kid proves that his memory and attention to detail are uncanny, as he can pick out any Robin in a lineup.  As expected, luck is not on this kid’s side.  Not only does Robin find the boy, but so does AzBats.  As the young boy struggles for his life and freedom, I saw the parallels with Starro in The Suicide Squad.   This kid is a product of circumstance and horrible timing.  Never once did he want to be in this situation.  Hell, he never even wanted to “break out” of Arkham.  A series of wrong turns and bad luck has put this kid on a path that seems to be one bad break after another.  House of Gotham very well might be the saddest story in Gotham, even more so than Bruce Wayne’s, and it’s not over yet.

Tamaki does progress the story nicely.  The characterization of all the major players is on point throughout the book.  It might just be a bit too much of we have seen this already that holds the letter grade back.  Raynor and Guerrero’s art is good, but you can see the difference when looking at the first three issues drawn and colored by Ivan Reis and Brad Anderson, respectively.  Three mistakes in four issues of this pairing in the grand scheme are not the end of the world.  I would like to see them tighten up the ship a bit.  Rosenberg again bats cleanup and clears the bases.  House of Gotham is an emotional tale that seems to leave the reader with their jaw on the floor and tears running down their cheek every week—making readers rethink which story is the primary and the backup. – Peter Verra