OFFICIAL SYNOPSIS: After more than thirty years of service as one of the Navy’s top aviators, Pete “Maverick” Mitchell (Tom Cruise) is where he belongs, pushing the envelope as a courageous test pilot and dodging the advancement in rank that would ground him. When he finds himself training a detachment of TOP GUN graduates for a specialized mission the likes of which no living pilot has ever seen, Maverick encounters Lt. Bradley Bradshaw (Miles Teller), call sign: “Rooster,” the son of Maverick’s late friend and Radar Intercept Officer Lt. Nick Bradshaw, aka “Goose.”

Facing an uncertain future and confronting the ghosts of his past, Maverick is drawn into a confrontation with his own deepest fears, culminating in a mission that demands the ultimate sacrifice from those who will be chosen to fly it. 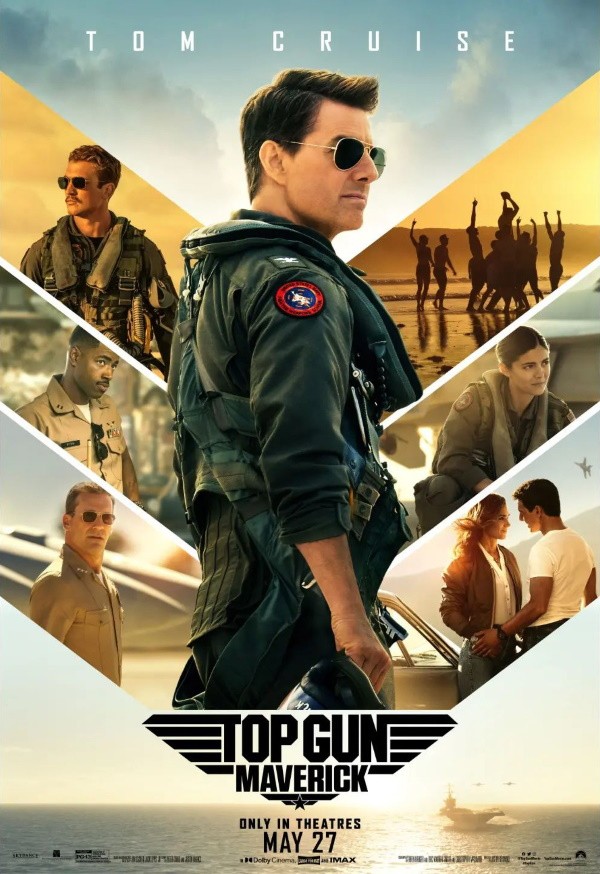 Long-awaited, Top Gun: Maverick, does not disappoint.  Starring Tom Cruise — who is also a producer — the film definitely satisfies the need for speed! Shot on IMAX digital, it’s an up-close and personal experience with intense aerial maneuvers and G-force pressure. To ensure his involvement with the film, Cruise insisted that real aircraft be used in these sequences, not CGI. The cast had to undergo extensive G-force training, so the reactions you see are authentic.

It’s been a long four years since filming began, and three years since the original release date. Cruise is 59 now, so he was 55 when filming began. Kudos to him for being in the kind of shape equal to the younger cast members. Physiques are on full display during a beach football scene, a tribute to the famous beach volleyball scene from the original Top Gun.

It’s been 36 years since the events of the first film.  Pete “Maverick” Mitchell is now working as a test pilot for the Navy, but due to his tendency to disobey orders, he’s never been promoted beyond captain. His Rear Admiral boss, played by Ed Harris, informs him that his kind will soon be obsolete, replaced by technology. However, Maverick has been summoned back to the Top Gun training center to prepare its best pilots for a top-secret, highly dangerous assignment.

His close friend and former rival Tom “Iceman” Kazansky, played by Val Kilmer, has kept him from being kicked out of the Navy for insubordination many times. Iceman is an admiral now, and much to the dismay of Beau “Cyclone” Simpson (Jon Hamm), the head of Top Gun, has assigned Maverick to train the top pilots for dog-fighting aerial combat. Fasten your seatbelts!

The mission concerns an airstrike on a clandestine uranium enrichment facility in an unspecified enemy country. Maverick quickly realizes that the danger is off the charts and that returning safely will be almost impossible. Still racked with guilt about the death of his wingman Goose (played by Anthony Edwards in the original film), Maverick determines to bring everybody back. To complicate matters, Goose’s son Bradley, call name “Rooster”, has made the final cut. Bradley blames Maverick for his dad’s death and his resentment shows. Miles Teller plays Rooster, and his physical resemblance to Anthony Edwards is remarkable.

The contenders for the 4 finalists who will fly the mission have something the original did not: diversity. It’s a multi-racial group and includes a woman, Natasha “Phoenix” Trace, played by Monica Barbaro. The usual types include Glen Powell as the extremely self-assured Hangman, Jay Ellis and Danny Ramirez as the serious, by–the–book pilots, Payback and Fanboy. Lewis Pullman, son of actor Bill Pullman, steals the show as the nerdy Robert Floyd who doesn’t have a call-name and just goes by Bob.

No one gets any romance but Maverick. He rekindles a romance with a former flame, Penny Benjamin (Jennifer Connelly), who is now a divorced mother of a daughter Amelia (Lyliana Wray) and owns the bar where all the flyboys hang out.

The mission sequences are as intense as you would expect. How it comes out and whether or not Maverick will be able to get everyone back safely, including himself, I will leave for you to find out. You’ll be on the edge of your seat, and if you’re afraid of flying, Top Gun: Maverick definitely will not help. – Jo Anne Hyde