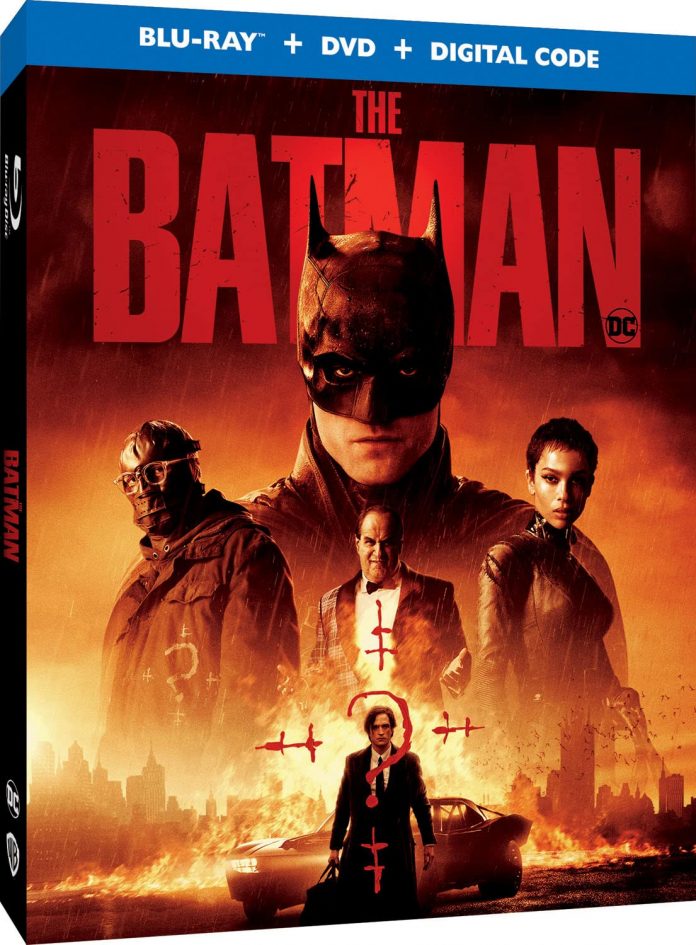 If you want to read my movie review of THE BATMAN, you can check out the one I wrote back in late February HERE.  In short, I saw THE BATMAN 6 times on the big screen, 10+ times on HBO Max, and as I am writing this article here on BOF, I’ve seen it 2 times (and counting) on Blu-ray.  I absolutely LOVE this film and it is without a doubt my favorite Batman movie to date…and that’s saying A LOT.

However, I’m not here today to discuss the film itself but to give you my thoughts on THE BATMAN on Blu-ray.  And thanks to the fine folks at Warner Bros., I am able to do that for you all over a week before its release on May 24, 2022.

(For more discussion and analysis on THE BATMAN, check out all of our podcasts on the movie HERE.)

Just an FYI, I was sent the Blu-ray/DVD/Digital combo pack, therefore I did not watch anything in 4K — take that for what you will.  Included are 3 discs: Blu-ray, DVD, and another Blu-ray with just the special features.  And of course, the digital copy can be redeemed (by June 30, 2023) via a code or QR code.

As I said, I viewed everything (the film and extras) in standard Blu-ray and I thought it looked very good.  After having watched it several times exclusively on HBO Max over the last 3 weeks, the improved quality of the “look” of the film on Blu-ray vs. streaming was quite evident.  In fact, I played it concurrently on Blu-ray and on HBO Max and switched between inputs on my TV to compare.

When it comes to the bonus features, they are as follows…

THE BATMAN Blu-ray/DVD/Digital Combo Pack
1 of 4

The deleted scenes come with a “Director’s Commentary” version with Matt Reeves discussing both as you watch.  There’s some great inside info on each one and why Reeves ultimately decided to cut each from the theatrical version of THE BATMAN.  Both are true “extras” and are not edited into the film. “Batman/The Joke at Arkham” would’ve come right after Batman and Gordon met at the morgue following Commissioner Savage’s murder, while “Selina and Oz” would have taken place directly before Selina goes down to The 44 Below while working for The Batman.

Some final notes on the extras that may be of interest:  I really enjoyed them — but I’m a nerd for this sort of stuff…Combined, they do indeed equal over 2 hours of bonus features and most are not on HBO Max (the extras on HBOM only add up to 29 minutes)…The DVD version only includes “Unpacking the Icons”…The digital version has all but “Unpacking the Icons”…And unfortunately, there is no “Director’s Commentary” with Matt Reeves of the entire film on this particular version.  There is one, but I believe that’s included in another version of the home video release (iTunes?).  Bummer.

Additional notes: There is an option to listen to the film in a variety of languages on the Blu-ray including English, Portuguese, Canadian French, English, and Spanish (subtitles too).  Sound options are Dolby Atmos and TrueHD.  I listened to it in Dolby Atmos via a Samsung soundbar with surround sound and it sounded great.

So that’s about it.  I know there are some other versions/special editions of THE BATMAN on Blu-ray that are available with a few more (and some exclusive) bells and whistles, but for about $25, this basic edition serves its purpose. Also, keep in mind that I’m not a TV/home video/Blu-ray/sound expert, so take this review from a layman’s POV, if you will.

I actually preordered this version when it first became available for pre-sale a few weeks ago for my own personal use.  I still like getting a physical copy of my Batman movies for my collection and to watch as well.  However, since I ended up with this copy from WBHE so I could write this review, I’ll be giving the one I pre-ordered away via a BOF contest once it arrives on May 24th. Stay tuned! – Bill “Jett” Ramey