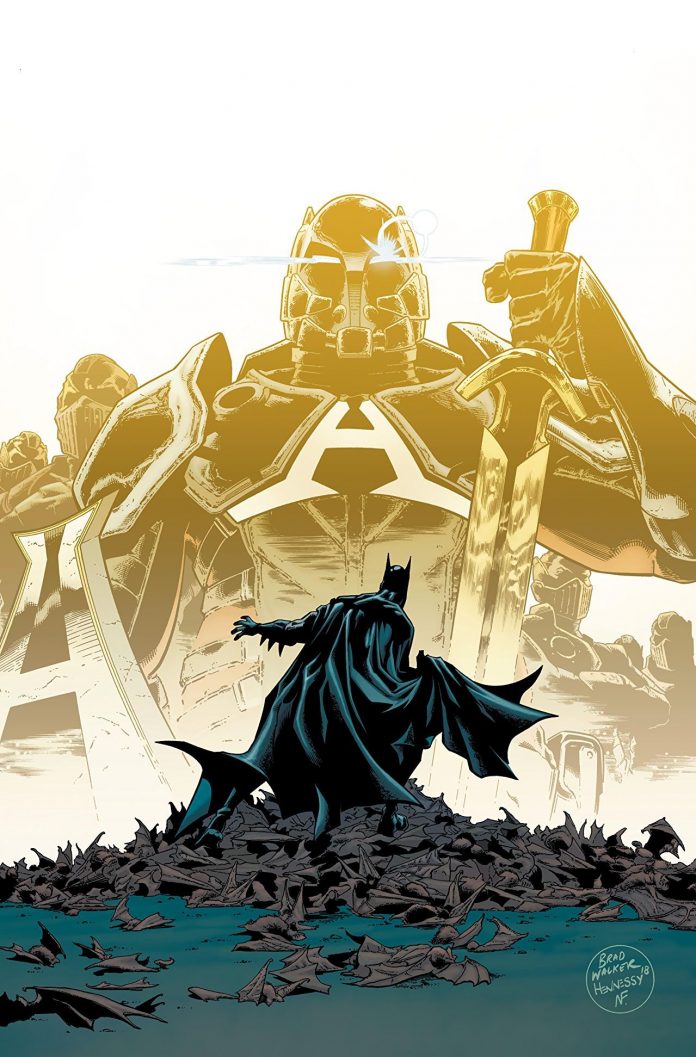 SYNOPSIS: After 1,000 issues, you’d think Batman could finally have a break…but no: as a new era dawns, he’s facing the most dangerous threat of his career! The Arkham Knight has arrived in Gotham City with an entire round table of deadly allies, and their first encounter will leave Batman shaken to his core!

Does anyone else still have a hangover from Detective 1000?

We are past the milestone leaving us at Detective 1K1.  We can now focus on the story Tomasi is telling in what has been a very entertaining run. Tomasi is paired up with a new artist Brad Walker.  Next up for Tomasi and Walker, the Arkham Knight.  No need to worry continuity cops Jason Todd has not been affected.  This is a brand new Arkham Knight in main continuity!

Tomasi teased the Arkham Knight at the end of ‘Tec 1000 and here he makes his appearance widely known.   First thing is first, this is literally a Knight.  Kudos to Tomasi for wanting to redefine this new character so early since his creation.  While the video game delivered a fine tale in the Arkham-verse.  That story could not take place in the main continuity.  It takes a writer of Tomasi’s ilk to be up for the challenge.  This Arkham Knight seems to be a cross between his video game counterpart and Azrael.

Tomasi establishes early on that this is a brand new Arkham Knight. While also providing the reader with what I think is his greatest accomplishment, Batman doing detective work.

Gotham is having a serious bat problem as dead bats are falling from the sky leaving the GCPD with one option, The Batman. Tomasi’s next best skill is character interactions.  Bruce and Alfred in the cave discussing the scenario is a blessing.  For every factual, on-topic point Bruce makes Alfred rebuttals with some of that fantastic dry English wit, perfection.

Tomasi juggles a wide ensemble of Gothamites for this tale while doing a fine job of introducing a brand-new character. Delivering not just that great Alfred/Bruce moment I mentioned earlier but a short and sweet Batman/Gordon interaction as well.  Tomasi can handle a rotisserie of characters better than anyone. Giving each one enough time to shine while still focusing on Batman.  Francine Langstrom appears for a few pages gearing up the action scenes of the book and it’s done so fluidly.

While following up Doug Mahnke is no a small task, Brad Walker makes it look effortless.  Walker provides great interiors, page 9 might be my favorite page in this issue.  I enjoyed Walker’s panel placement and his use of portrait and landscape pages.  Flipping the book helps the story, not once did I complain about rotating.  Walker’s action panels are stunning, the Batman/Man-Bat fight is a bold 10 round heavyweight fight and only a warm-up.  The Arkham Knight and his pals have another breath-taking fight scene that makes me think of the Hand meets Court of Owls Talon.  Just an all-out battle royal, smoke bombs, roundhouse kicks, grapnel guns and anything else you can pull out of your utility belt.  The last 10 pages are one hell of a roller coaster ride.  Fasten those seat belts!

All in all, this was a great follow up to the landmark.  Detective 1K1 provides all Batfans needs.  Batman investigating a new crime, misdirection, new villains reimagined, literally what else could you ask for?

Interiors by an artistic team that will have you flipping back and forth more than once.  Shout out to inker Andrew Hennessy and colorist Nathan Fairbairn, their contributions do not go unnoticed.  New artist Brad Walker is more than welcome back next issue, we have been lucky to have such a great run of wonderful artwork on this book.

The best part of all this, we still have no idea what is going on.  Only the Arkham Knight does and it seems like he has Batman right where he wants him! – Pete Verra