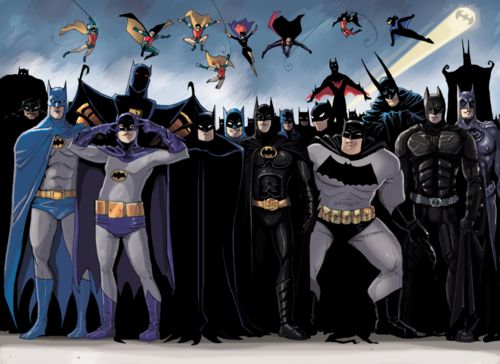 Who is the “real” Batman?

Is he The Dark Knight, or is he The Caped Crusader?

Is he found in comics, animation, video games, TV or film?

Is his suit a costume or battle gear? Is it gray and black, blue and gray, or all black? Does he wear tights or body armor? Is his bat symbol found within a yellow oval or spread wide across his chest?

Does the real Batman have long or short ears on his cowl? Are his eyes covered by lenses? Is the cape for theatricality, or does it have a specific function?

Does his utility belt have pouches like a policeman or a soldier, or does it have narrow cylinders?

Does he use a Batarang and rope to get from building to building, or a grapling gun instead?

Is Bruce Wayne psychotic, crazy perhaps? Or is he just really dedicated to his “mission?”

Does his universe exist in a dark, macabre, fantastic netherworld? Or does he exist in a place almost as “real” as ours — just with a few “odd” characters?

Is he The Bat-Man who doesn’t oppose carrying a lethal weapon and using it from time to time? Is he Batman whose adventures may take him into outer space or back in time? Is he Batman, honorary member of the Gotham City Police Force. Is he The Batman, Darknight Detective — a vigilante solving crimes much like a freaky, badass Sherlock Holmes?

Does the real Batman only appear at night, or could we find him in the middle of the day at some public event?

Should the real Batman operate solo, or should he have allies such as Robin? Was Ace The Bat-hound, Bat-Woman, Bat-Girl, and Bat-Mite ever part of the real Batman’s world?

Was the 60s TV show with Adam West the real Batman?

On the big screen, was the real Batman realized in BATMAN? BATMAN RETURNS? BATMAN FOREVER? BATMAN AND ROBIN? Was he in “The Dark Knight Trilogy?”  Or, as depicted in BATMAN v SUPERMAN and JUSTICE LEAGUE?

Right now, think “Batman”…envision him with your mind’s eye. There he is…see him?

So, the answer to all these questions is a collective “YES.”

Because the “Real Batman” is the one that exists in the heads and in the hearts of all Batman fans. – Bill “Jett” Ramey