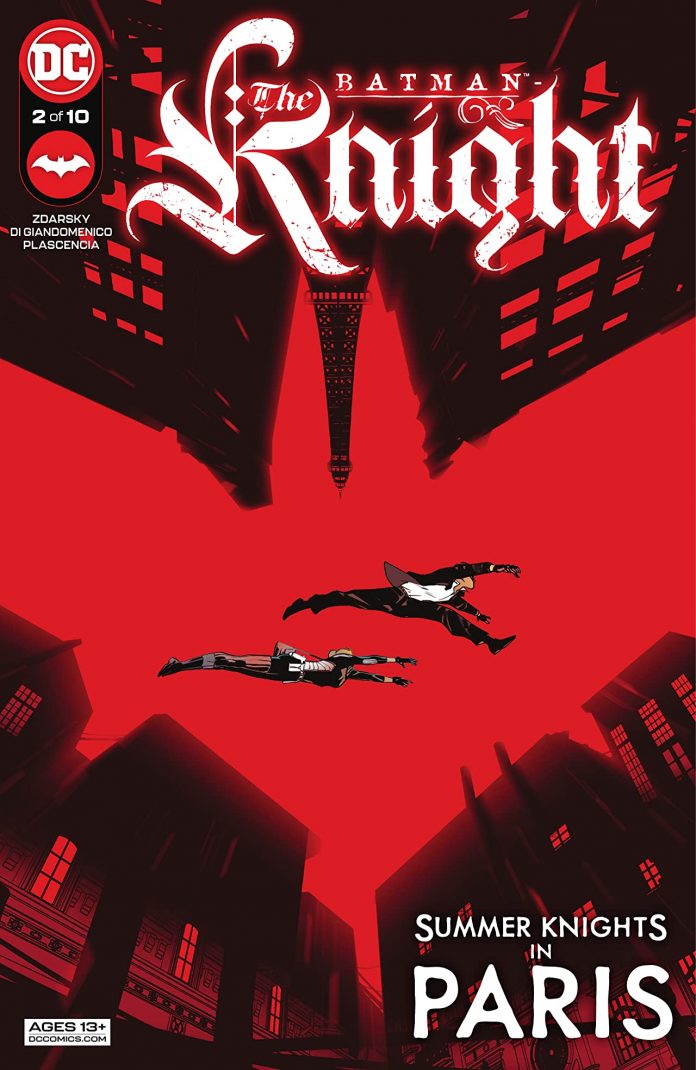 SYNOPSIS: Bruce Wayne’s journey toward becoming the Dark Knight has begun, and he has many hard lessons to learn before his education is complete. His adventure begins in the City of Lights, Paris, where he’ll train with a world-renowned cat burglar and come into contact with a horrifying serial killer stalking the city’s wealthy elite…

The last issue wasn’t a fluke.

This series is good.

Bruce’s quest to be the best has entered the world-traveling phase and he has landed in Paris, France. Coincidentally, a serial killer has been stalking the city, which has caused the local authorities to enlist the help of renowned manhunter Henri Ducard, who should be no stranger if you’ve seen Batman Begins.

It’s been a month since Bruce left Gotham and he is rudderless. We tend to think of Batman as a man who has a plan for everything, who’s thought out every contingency and prepared for it. Here, at the start of his career, that is simply not the case and I enjoy seeing a Bruce Wayne who doesn’t know where to start his journey, beyond seeking out the best.

This brings him to a similar point as we saw in the aforementioned Batman Begins, turning to a criminal lifestyle to better understand what he is up against and to learn how to counter it. Enter Lucie, “The Gray Shadow”.

Lucie is a burglar so masterful, people assume she stopped stealing when in fact she just got better at not getting caught at it. Lucie is a unique mixture of influences, clearly setting a template for the Bruce/Selina dynamic that is to come, and with a moniker like “Gray Shadow”, conjures up images of an animated Bruce and one of his many inspirations, the Gray Ghost.

It would be easy to be dismissive of Lucie as a Selina knock-off, but she doesn’t simply serve as a criminal and potential love interest. She is one of Bruce’s earliest mentors. Not only does she point out his clumsiness in the field, but also highlights his awkwardness in romance. It’s understandable how Bruce would get confused, especially as every line he knows is getting blurry. She allows the reader to see just how inexperienced this Bruce is and impart her wisdom so he can become the crime fighter we know him as. It also lends insight into how Bruce can look past Selina’s future crimes in stories like Batman/Catwoman.

What Zdarsky does correctly here is flesh out the time Bruce spends learning from Lucie. What is a scant minute or two in Batman Begins gets room to breathe under Zdarsky’s pen as we see Bruce not just train with Lucie, but trying to rationalize the morality of the path he is taking (in addition to trying to cook a meal for others without Alfred’s help). It makes for an interesting contrast in comparison to where the character will eventually go as a vigilante who will cross certain legal lines to see justice done. As Batman is quoted in The Dark Knight Returns, “Sure, we’re criminals…We’ve always been criminals.” What Zdarsky has done is lay the groundwork for that thought.

I also saw an allusion to The Man Who Falls as Bruce literally does just that. This isn’t just a simple application of gravity, though. Zdarsky uses it as a metaphor as Bruce ponders his fall from grace as he plummets to the Parisian streets below. This isn’t his only brush with death this issue, either.

Lucie decides it’s time to put Bruce’s skills to the test for real in the field and during the robbery attempt, he gets shot. The power of the writing and art is so strong that I felt Bruce’s panic. This may not be that big a deal to him in the years to come as the Dark Knight, but in this moment, the shock is real, the fear of failing his mission is consuming.

Contrasting Batman: Year One, it’s his mother that Bruce is talking to in his head as he lays on the ground, bleeding out of the same leg that Holly will stab him in on the night he gets inspired to become a bat. While his father is a physician, it feels primal that the hurt Bruce would think of his mother here. While he addresses both his parents at one point in this story, it’s only when he gets shot that he thinks solely of his mother.

I know I’m going to run out of adjectives here in the months to come as I try to describe the art of Di Giandomenico and the coloring of Plascencia. It’s magnificent! Di Giandomenico gives each panel a theatrical presentation, with character faces giving you insight into exactly what they are feeling in every given scene. Di Giandomenico certainly has a unique style, one that at times gives me Kubert vibes. Plascencia dazzles with his lighting effects, making every panel all the more breathtaking and adding a degree of realism. Shadows are very prominent, particularly when it comes to Bruce Wayne, serving almost as a cowl sometimes, alluding to his future guise. Again, lighting is such a big factor in this book and it is simply perfect.

There are a few surprises at the end that will certainly make one hungry to see where this goes next! Zdarsky provides great insight into Bruce at this age, who is far from perfect. It’s refreshing to see Bruce this way. While there are echoes of past versions of the Batman legend here, it feels contemporary and fresh, making for an issue that feels original and very satisfying, even without a Batman. – Javier E. Trujillo