SYNOPSIS: War in the streets! As Dr. Wear desperately tries to keep his plans for Arkham Tower from crumbling, a major drug deal gone bad puts the nervous doc in the sights of both the Party Crashers and the Penguin! The list of people very badly wanting to kill Dr. Wear grows, and Nightwing is on the precipice of cracking the whole scheme wide open! But with the maniacal Party Crashers waging war against the Bat-Family across Gotham, Dick must choose between helping a tower full of villains and helping his family! Then, it’s Knightfall in Gotham during part seven of “House of Gotham,” as the Boy (growing into a man before our eyes) runs afoul of an uber-violent, unhinged Azrael Batman! This latest conflict pushes Gotham’s most vulnerable into madness, and one man’s rogues gallery reveals itself as another man’s salvation. 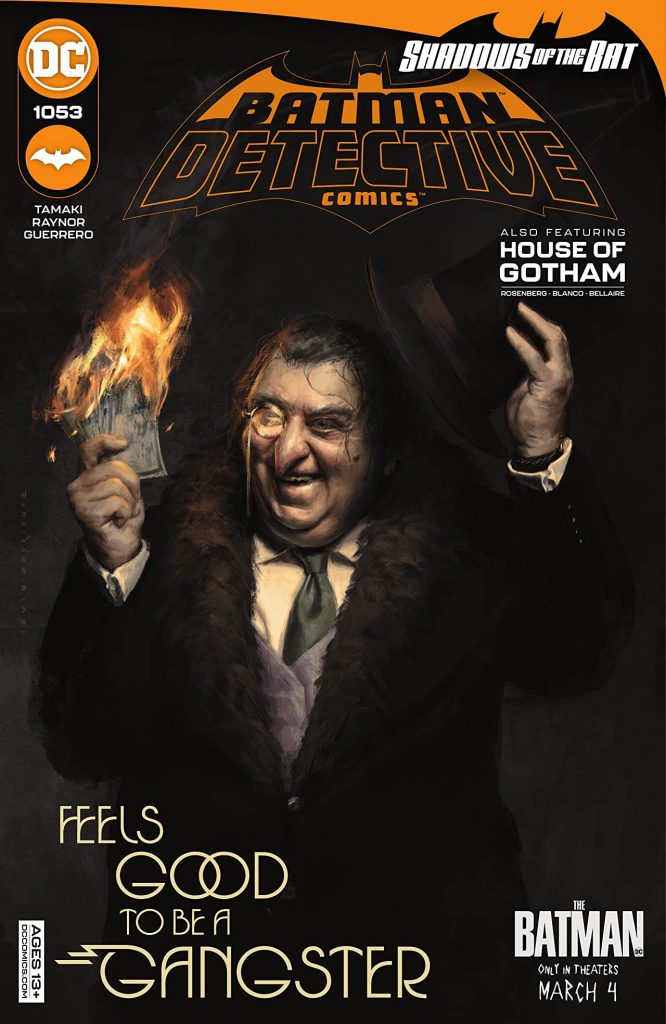 Detective Comics has not just picked up the pace; this book is in an all-out sprint!  A Batman book without Bruce Wayne’s Batman isn’t new to readers.  Grant Morrison’s Batman and Robin and Scott Snyder’s Superheavy are the first that come to mind.  We are just past the midway point in Shadows of the Bat, and I think Tamaki has surpassed Superheavy and is hot on the coattails of being as good as Batman and Robin.  Meanwhile, Rosenberg has taken Gotham’s most unfortunate youth on one of the wildest rides you will ever read.

Let’s break it down!

Tamaki has masterfully crafted a Batman story with the perfect amount of supernatural and street-level crime.  Last week’s issue was so well balanced you will be impressed at how easily she carries the momentum into this week.  Dr. Ware once again is trying his best to tread water.  This guy has more lives than a cat.  Having just doubled his debt to the Penguin, he is having a hard time moving product for the Party Crashers, and there are employees ready to leak everything to the press.  The walls are closing in on Dr. Ware, but he is proving to be very resilient and quite lucky.  The Bat-family is also hot on his trails while dodging a few bullets of their own.  When Oracle and her team are ready to make their move, the guano hits the fan.  Tamaki does a beautiful job of guiding the reader through this issue with ease; one page beautifully sets up the next in grand fashion.  Tamaki is setting up all her dominos, and each one falls perfectly into place.

Max Raynor once again graces the pages of Detective with their pencils.  This issue might be the most impressive yet from the artist.  The panel layouts are easy to follow and detail sprinkled with great action on top.  In the last issue, Huntress was the character on display with a wonderful fight scene.  While here, Cassandra Cain has her moment to shine in a showdown with one of the Party Crashers.  Nightwing has an excellent semi-splash page (if that is a thing) with a stunning Gotham City in the background.  Even the most casual pages of an undercover Grayson talking to the nurses are illustrated to perfection.  When an artist can make the simplest things look beautiful, you know that they are firing on all cylinders.

Luis Guerrero does a beautiful job with the colors in the book.  The action and emotional panels have that old-school backdrop feel.  Guerrero’s work has a bright look; this is not a dark and dull Gotham.  It is vibrant and alive from atop the cities skyscrapers to down in the sewers.  Guerrero makes Raynor’s art-pop on every page.

House of Gotham is so damn good I wish it had its own book.  Between this,  Joker’s Puzzlebox, and Task Force Z, I think DC has found their next Joshua Williamson in Mathew Rosenberg.  Everything that he writes is pure gold from what I have read.  House of Gotham is no different.  House of Gotham is a tale that takes so many twists and turns your head will be spinning like Beetlejuice.  Our red-headed friend has gone through the Gotham Underground internship program at lightspeed.  First Scarecrow, then Penguin, and now he has graduated from Bane’s school of hard knocks.  You feel for this kid in this issue, and it seems like he sees the writing on the wall after another near-death scenario.  This kid is as tough as nails, but even he knows his life will be cut short if he does not escape Gotham City.  Hopefully, there is a light at the end of the tunnel.  But this being Gotham City, happy endings can be a figment of one’s imagination.

Fernando Blanco and Jordie Bellaire are the artist and colorist again in this issue, and they are an outstanding tag team.  Blanco’s Bane is an impressive brute force and doesn’t need to punch anything.  At the same time, his Zsasz has that perfect psycho grin that accompanies every serial killer.  Blanco captures a wide range of emotions thought out the book.  Our young friend, at times, is eerily calm at one moment, then at another, you can see the fear overcome his body, the determination set in as does his fight or flight.  The primary is this florescent set of color and light; this story takes a different approach.  The red color scheme for most of the issue sets a tone of panic with just the right splash of blue to capture your eye.  Bellaire does a magnificent job of doing something that sets these two stories apart, a trait of a masterful visual storyteller.

Detective Comics #1053 is a beautiful comic book from the first page to the last.  Two stories that captivate readers and have them looking forward to next week.   All thirty-three pages are filled with well-crafted dialogue, high stakes, and beautiful artwork for $4.99.  That is what I like to call a solid bang for your buck.  I was apprehensive about the quality of these backup stories when DC announced this format some time ago, and I must eat crow.  It has enhanced the reading experience for Detective, especially right now.  Sit in your favorite chair this new DC Day and read the best Bat-book you will have on your pull list for the week! – Bill “Jett” Ramey