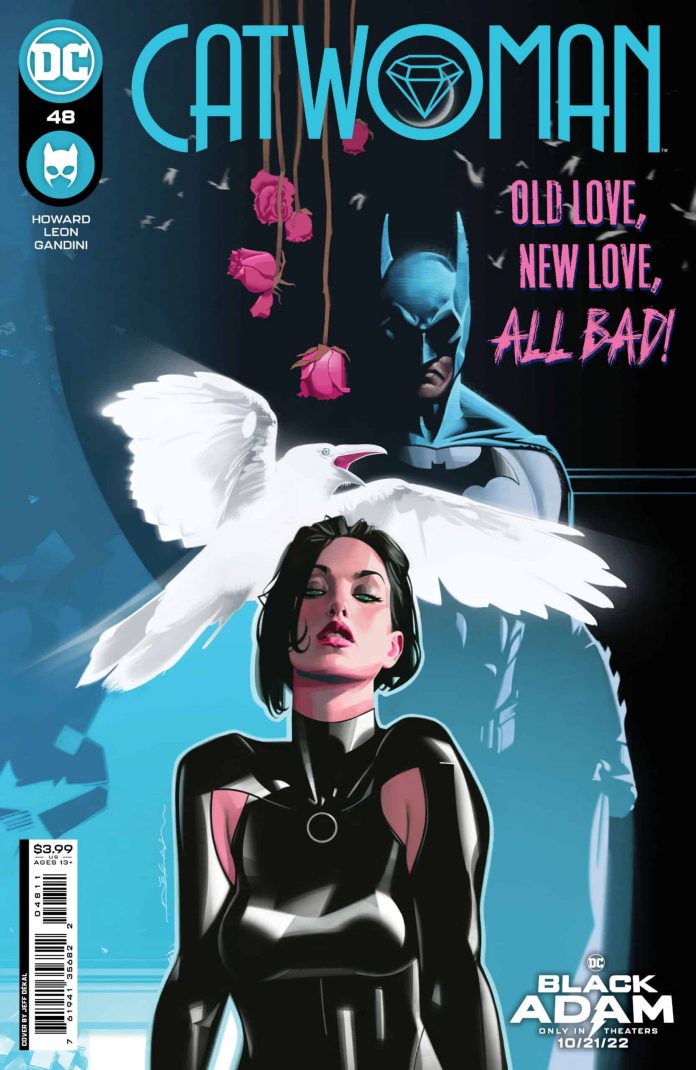 SYNOPSIS: Don’t you just hate it when your current and former lovers meet accidentally? That’s definitely the case here for Catwoman, as Valmont and Batman cross paths! Is Batman jealous or just concerned that Selina is dating an international criminal who is also a murderer? There are some lines you just don’t cross, Cat, and not all attention is good attention.

This issue starts a new arc, “Furious Hearts, part 1 of 3”, but picks up right where things left off, finding Catwoman and Valmont on the way to Italy to save Dario. They head to a sprawling estate in Tuscany, playing up their Calabrese connections, dressed like Mafia royalty to request an audience from Don Tomasso.

From the opening pages, the reader is transported to a different world, a brighter, sunnier world than the bleak confines of Gotham. The sunset warmly glows and there is a serenity to the location. The colors provided by Veronica Gandini just make Nico Leon’s art sing, not just here, but throughout the book. This isn’t their first issue of Catwoman, but I was impressed right from the get-go. This issue looks fabulous, even when we transition to Gotham, and later back in Tuscany. It drew me right in, making Tini Howard’s job that much easier.

Don’t let the official synopsis fool you — there’s no Batman in this issue. However, don’t let that sway you. Howard provides a captivating story, full of intrigue, danger, and thrills. Catwoman demonstrates her knack for improvisation and determination to help a friend. Seeing her and Valmont play up being different types of criminals is a lot of fun, as is her appealing to Vittoria’s thirst for wielding power.

Black Mask continues to be a threat back in Gotham. His new mask makes him feel more unhinged and dangerous. The scenes with Dario locked in the trunk of the car ratchet up the tension, but the typos in his text messages to Selina brought some comedy relief as well. Howard does an excellent job mixing the various tones in this book.

The climax was exciting as well, feeling like it was ripped from a movie as Catwoman and Valmont faced off against a group of assassins that included the face-eating Flamingo. Again, Howard excels in bringing a sense of fun along with danger, one that carries through in the pacing, art, and colors. Character moments get a chance to shine, even amidst battle, ending in a very James Bondian conclusion.

I really enjoyed this issue. Right from the start, the visuals drew me in and Howard’s storytelling kept me riveted with each turn of the page. This isn’t your typical Catwoman story, but it sure is entertaining! – Javier E. Trujillo