EDITOR’S NOTE: The following is a recap of the events at Bowling Green State University’s Batman in Popular Culture Conference held the weekend of April 12-14, 2019.

BOF’s Ryan Hoss — as well as BOF’ers Trey Jackson and Rob Myers — attended.  Not only were the guys able to present, but they also covered for yours truly who was unable to attend and preside over the “History of Batman on Film” panel in which I pitched.

So, a BIG THANKS to those boys for covering for me!

Also, stay tuned for more from the conference from Ryan, Rob, and Trey here on BOF soon. – Bill “Jett” Ramey 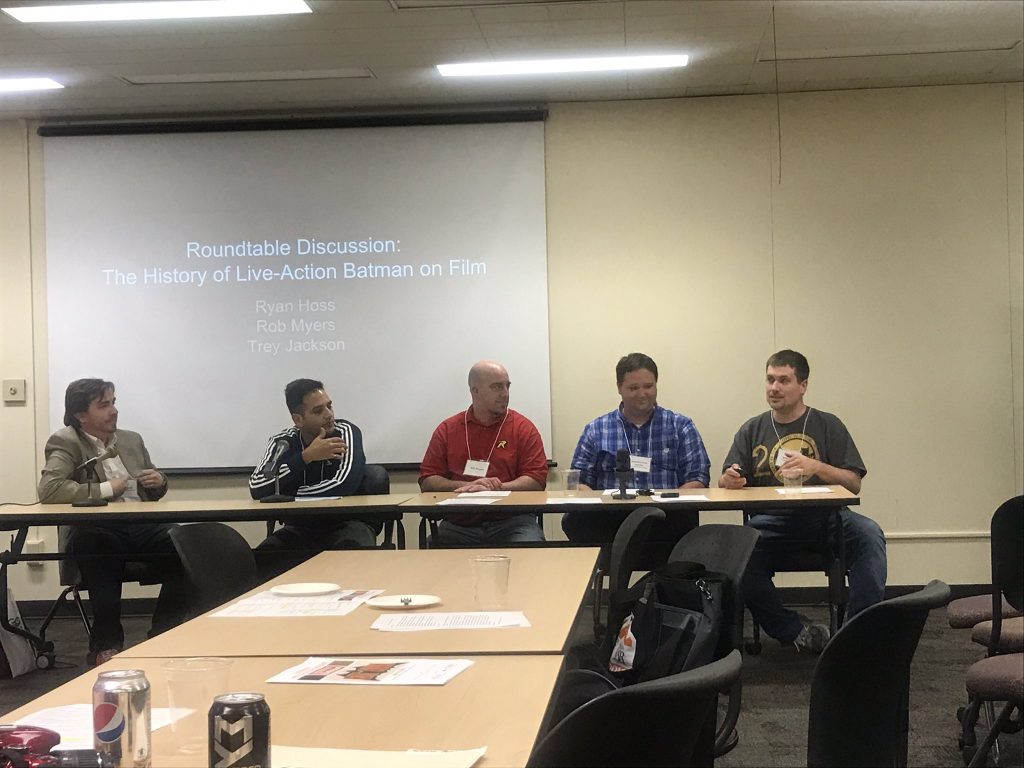 This weekend (April 12-14, 2019), Bowling Green State University held a Batman in Popular Culture Conference to celebrate Batman’s 80th anniversary.  Several BOF’ers were able to attend members and to give our their own presentations.

In addition to that, we got to host a live BOF roundtable discussing the “History of Batman on Film” (literally, not BOF the website) through the lens of fansites like BOF, as well as fan culture more broadly.

Ryan Hoss, Rob Myers (from Everyone Loves the Drake Podcast), and I (Trey Jackson), each gave our own presentations and joined up for the roundtable.

Ryan, joined by Rob, talked about KNIGHTFALL and how it reaffirmed Batman’s place in fandom and culture as a hero with a moral code, conviction, and how those essential characteristics are part of Batman’s longevity

We then all got to gather together for the “History of Batman on Film” panel to talk about Batman movies throughout history; from the 1940s serials up to Nolan’s THE DARK KNIGHT TRILOGY.

We shared our personal memories of each movie, the state of fandom at that time, and how fan culture developed alongside Batman’s movie history (highlighting the birth and growth of BOF, of course!).

Unfortunately, we didn’t have time to touch on BATMAN v SUPERMAN, SUICIDE SQUAD, or JUSTICE LEAGUE.

Some other highlights of the conference included:

Be sure to check out the program for a full list of panels and presenters.

We got to proudly represent BOF, talk Batman with lots of other fans and creators, and meet some long-time friends for the first time face to face! All in all a great weekend. Thanks, BGSU! – Trey Jackson

When It Comes To Reeves’ Solo Bat-Film, Slow Down and Enjoy...