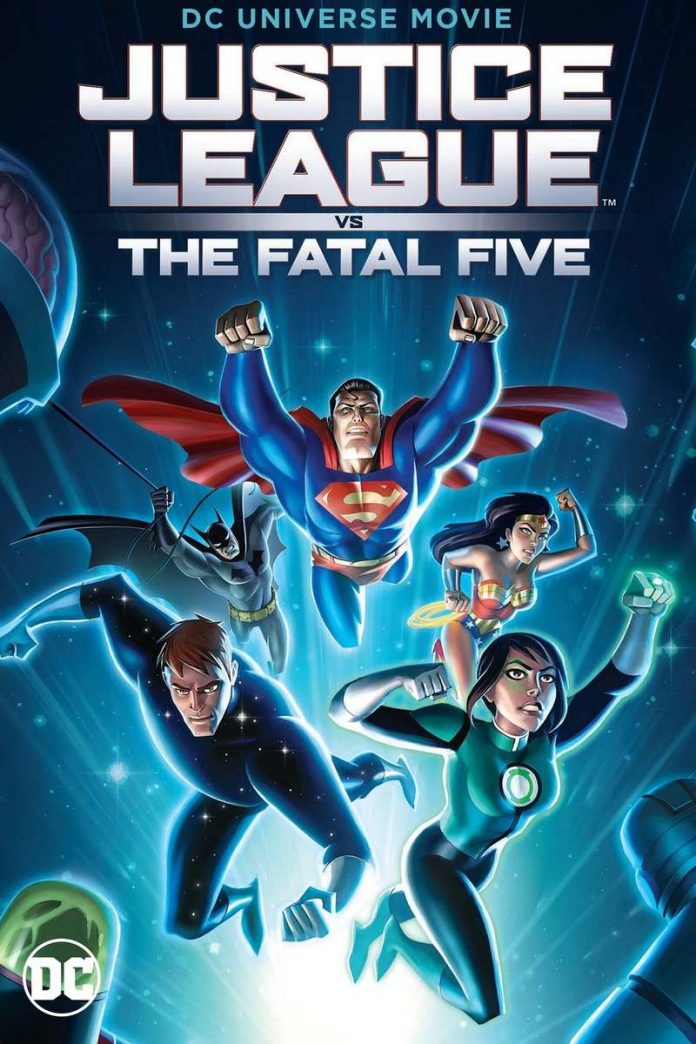 Looking back, it seems incredibly obvious that Batman: The Animated Series was sure to launch decades worth of critically acclaimed and fan-beloved animated content for the DC Universe. The 1992 series was groundbreaking thanks largely to the masterful design and guidance of Bruce Time. Of course B:TAS would go on to spawn additional animated series and feature films building into an entire DC animated universe that is cherished to this day.

While not technically set in the “Timmverse” the 34th entry in Warner Bros.’s line of DC animated features is certainly “Timm Adjacent,” bringing back the classic animation style and reuniting the core of the original cast. Justice League vs. The Fatal Five has some rough spots here and there, but it serves as a very solid addition in the overall slate of films.

The story revolves largely around members of the titular Fatal Five traveling back in time from the 31st Century to present day along with Star Boy from the Legion of Super-Heroes. The time travelers end up on a collision course with the League, including its newest members; Jessica Cruz/Green Lantern and Miss Martian.

The movie works on many levels and chief among them is the visual style and quality of animation. The DC animated features have had some low points here and there when it comes to the animation itself (The Killing Joke, Superman vs. The Elite, Justice League: Doom) but this isn’t one of them. The design work has the clean lines, deep colors, and easy-on-the-eye quality that the Timm animated universe is known for, but it also has a smooth fluidity to it that hasn’t always been present over the years. The movie really shines in 4K and if you’re able, I’d suggest watching it in that format.

There is also an immediate familiarity and nostalgic bond seeing these characters portrayed in this style, and it wouldn’t be complete without the Trinity’s definitive voice portrayals by Kevin Conroy, Susan Eisenberg, and George Newborn. It’s pure magic getting to see and hear this rendition of Batman, Wonder Woman, and Superman together again, and the film made a wise choice in getting the old band back together.

Elyes Gabel, Diane Guerrero, and Daniela Bobadilla voice the newer characters Star Boy, Jessica Cruz, and Miss Martian respectively, and it’s these characters who actually get the most focus and screen time here. All three voice actors provide strong performances with Guerrero and Gabel really shining. In fact, it’s the interaction between Star Boy and this Green Lantern that really fuel the film, with both characters struggling with mental illness and having the strongest character development. Gabel is likable, sympathetic, and heroic as Star Boy, seeming to channel a “young Robert Downey Jr.” feel for the role. Guerrero continues to impress with her work on DC properties (she also stars as Crazy Jane in TV’s Doom Patrol,) portraying the angst, worry, strength, and resolve of Jessica’s Green Lantern with command and approachability.

There are a few choices in the film that don’t work as well. The first, and most impactful to the story, is the portrayal of the film’s villains. The Fatal Five are underdeveloped and their motivations are never made clear. We don’t see what their actions or goals were in the 31st century and we don’t learn much about them as individuals or their inter-team dynamics. Still, they are big tough bad guys and give the League and Legion a formidable challenge.

The level of violence presented is also something that misses the mark given the overall feel of the design. It’s a bit shocking to see a body count as high as it is here along with the graphic nature of the deaths on screen. We are given a very unsettling origin flashback for Jessica Cruz and, while effective for establishing her character, it seems at odds with the Timm-Era animation and approach. This, and other instances of more gruesome violence seem to serve the goal of turning out PG-13 level content than the story itself.

I mentioned earlier that JL vs. TFF was only “Timm-Adjacent,” and while the animation and actors would seem to clearly tie this film into that universe, it’s clear that this is not the case. Characters that have already interacted in the various Timm TV series are not aware of one another here and the nature of the League’s relationship to the Legions is also incongruent with what has been previously established. It seems like a missed opportunity to not find a way to directly tie this story into what has come before. Still, as homage and stylistic returns go, this is miles ahead of the awful “Batman and Harley Quinn.”

Executive Producer Timm, director Sam Liu, and writers James Krieg, and Eric Carrasco have produced and solid and entertaining entry into DC’s line of animated features. Justice League vs. The Fatal Five is must watch for fans of the Timmverse, DC Superheroes, and quality animation. – Garret Grev