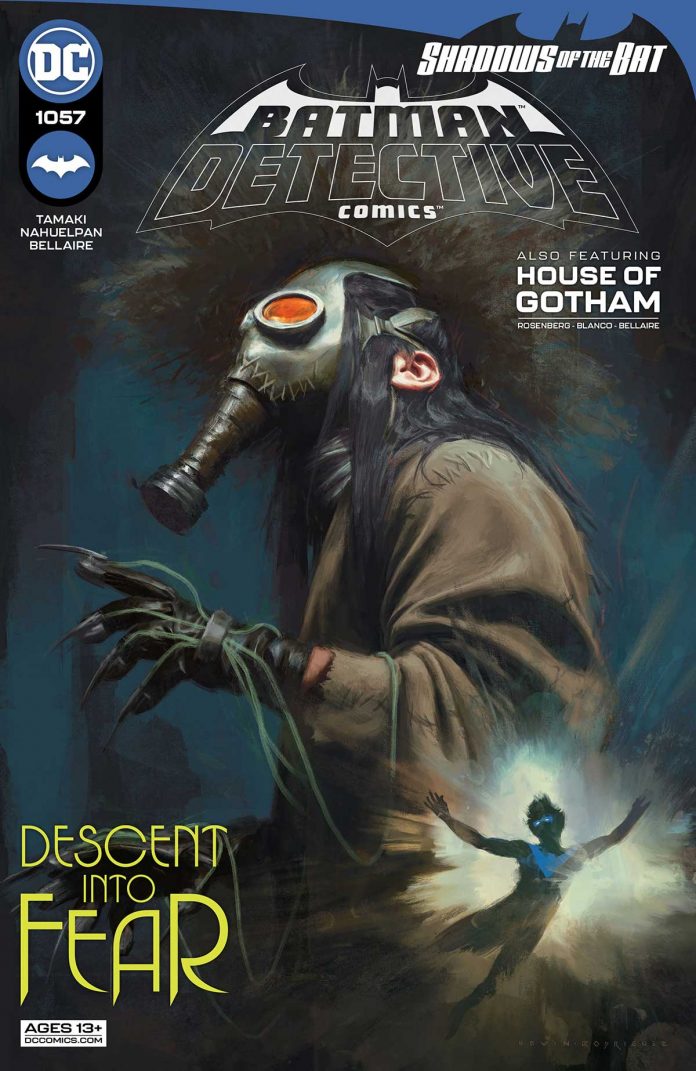 SYNOPSIS: Batman is back! And just in time to save the life of Nightwing, who was given a fear toxin super-dose and tossed out of a skyscraper—another tragedy surrounding Arkham Tower’s hostile takeover. As Scarecrow readies his forces for the big bat, war erupts on every floor of the building between the Penguin’s thugs, the Party Crashers, the murderous Arkham inmates, and an overwhelmed Bat-Family who’s struggling to get everyone out alive! Will the return of the bat be enough to turn the tide to victory…or does another X factor lurk in the battle that could save the day? The penultimate chapter of “House of Gotham” arrives as a battle erupts between Batman, The Joker, and the Boy in horrifying fashion! Bruce Wayne has felt responsible for this situation for years now…but does he have what it takes to save the life of his sworn enemy?

We are in the eighth inning of this tie ballgame, and it is a nail-biter. Detective Comics #1057 is the eleventh part of Shadows of the Bat, which means we have one more issue left in this twelve-week extravaganza! Mariko Tamaki is not alone in this endeavor, as Matthew Rosenberg has been with her since the start, crafting the backup tale House of Gotham. The two writers have teamed up for one hell of a ride well worth the $4.99 price tag for twelve weeks straight.

Chapter eleven of “Shadows of the Bat” has Tamaki racing to the finish line rapidly. The last issue Tamaki brought out the big guns with the return of the Caped Crusader in grand fashion. Tamaki has done a magnificent job surprising the reader with prominent name characters popping up at the most unexpected time in the previous few issues. We have seen Harley Quinn save Dr. Meridian, Scarecrow reappear, and of course, the Batman saving Nightwing last issue. Tamaki’s flair for the dramatic has been remarkable during this tale. Here she goes with an action driving issue filled with excellent tactical search and rescue moments. As in past issues, every member of the Bat-family has time to shine, swapping out the knocked-out Nightwing for Batman.

While Tamaki has done a magnificent job of bringing back big-name characters, two characters specific to this tale have become centerpieces, Ana Vulsion and Koyuki Nakano, the mayor’s wife. These two characters have slowly become intricate figures of this story. Vulsion is somehow connected to Huntress as Huntress sees these visions of Vulsion’s actions in real-time. By the book’s end, Koyuki Nakano seems to be the one character who can end all the chaos in Arkham Tower. Will she do so with peace or vengeance?  We will have to wait for next week when this Detective Comics exclusive event concludes.

Once again, Amancay Nahuelpan handles the interior art for Detective’s main tale. We get to see in detail Nahuelpan’s Batman. This Batman is a barrel-chested brawler sporting that classic yellow oval. Nahuelpan brings a vintage look to all the characters, with Batman, Robin, and Cassandra Cain Batgirl standing out. This may come out of left field, but I don’t think I have ever seen anyone draw a fade as good as Nahuelpan.  Robin is sporting a fresh cut that would make my barber jealous. Nahuelpan does an excellent job of putting Batman in the forefront of pages with detailed panels surrounding the character. I love what Nahuelpan was doing with some of these fight scenes. Using silhouettes gives the book a Frank Miller vibe at times. While that was going on, colorist Jordie Bellaire highlighted the yellows of Robin’s cape or the teeth of the Party Crasher’s masks. It is just pure creative genius by two artists at the top of their game. My favorite page in the book is watching Cassandra Cain’s Batgirl swoop down and kick Scarecrow in the face. Nahuelpan’s linework is spectacular in this book, that page will give readers motion comic vibes. It’s like those old-school magic eye posters where you see her moving if you look at it long enough.

Lately, Matthew Rosenberg has been a man on fire, Joker’s Puzzle Box, Task Force Z, and House of Gotham. This is the first time in this tale eleven chapter run that I was not blown away by an entry. Now, that is not saying this is not a good Batman story. It feels very different from what we have gotten in the past. For the first time since this tale began, our unnamed red-headed friend is not present at all in the story. Rosenberg delivers some fine detective Batman moments and beautiful interactions with the “Robins.”  Where is the character that captivated readers for ten issues? It feels very awkward to drop the character after investing so much time in telling us his life story. We have followed this young man from his childhood through the Gotham Underground, Knightfall, and No Man’s Land. Again, this is still a well-written Batman tale, and we have one more chapter to go for the conclusion, but where is the star?

Detective Comics #1057 is a good setup man in the eighth inning while the closer is warming up in the bullpen. Not Mariano Rivera 1996 good, but you have a good feeling that you will get the ball to your 9th inning guy to close out the game. Tamaki does her part with a well-executed action story that continues to surprise the reader with twists and turns. The artwork by Amancay Nahuelpan on the main story and Fernando Blanco on the backup is top-notch. You have the best colorist in the game Jordie Bellaire working overtime by coloring both primary and backup. Rosenberg still delivers a good backup story even though it may fall short compared to the previous entries. Once again, Detective Comics gives you a fantastic reading experience! You will be hard-pressed to find a better way to spend your money on new DC Day. – Peter Verra

Robert Pattinson in Rehearsals for THE BATMAN (and More)