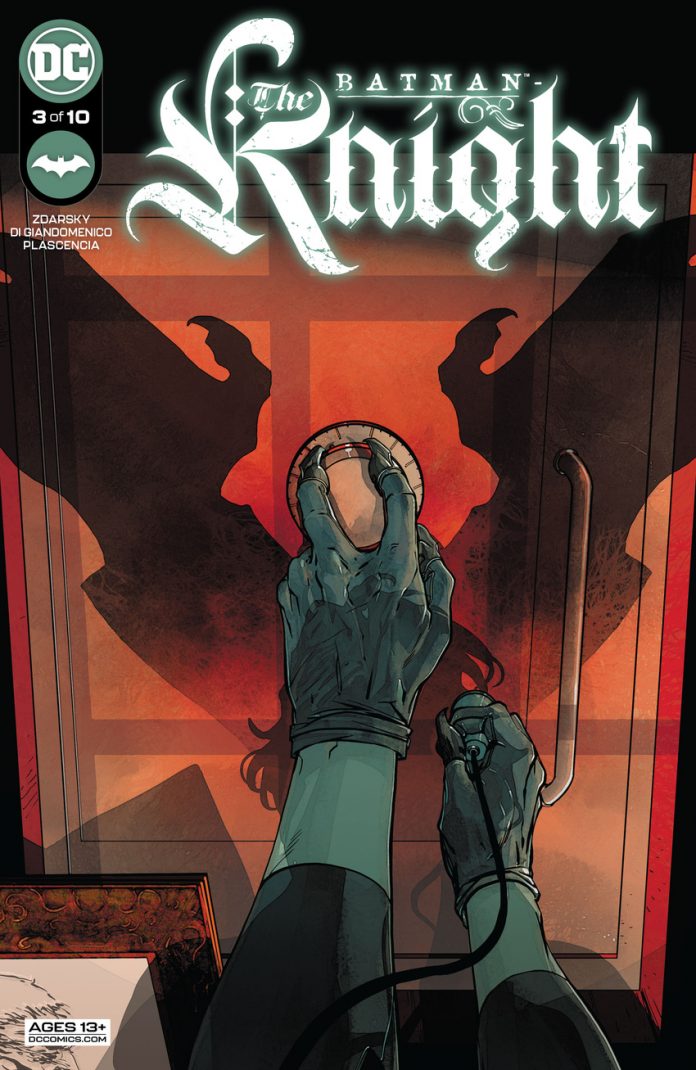 SYNOPSIS: While training in Paris with an infamous cat burglar, Bruce gets caught in a web between Henri Ducard and a serial killer known as the Foundling…will this “first test” for the young Batman prove deadly?

Literally caught with his pants down, Bruce encounters Henri Ducard for the first time. However, things don’t go down as one would expect!

While Ducard has been working on the Foundling case, the job that holds the highest priority, i.e. the best paying one, comes from none other than Alfred Pennyworth – find Bruce Wayne. Thus, Alfred unintentionally continues Bruce further down his path to Dark Knighthood by placing him temporarily under the tutelage of Ducard.

And what a lesson Bruce gets! Accidentally stumbling onto a serial killer’s trophies puts Bruce on a collision course with some difficult lessons to learn! Zdarsky simultaneously demonstrates how inexperienced Bruce is on stakeout and how intuitive he can be when it comes to deduction. Much like Daniel Craig’s 007 in Casino Royale or Pattinson’s Batman in The Batman, our hero is prone to making rookie errors and his fallibility and struggles draw the reader in.

Aiding Mr. Zdarsky in the storytelling once again are Carmine Di Giandomenico on art and Ivan Plascencia on colors. They are truly a Dynamic Duo when it comes to the visuals in this book. Plascencia bathes faces in shadows, a streak of light flashing across their eyes, establishing a film noir-like tone. Di Giandomenico’s panel work feels very conventional, moving the story along at an even pace. His camera angles bring life and excitement to the page. I love the little details he includes in his work, such as the faint reflections of Bruce’s fearful face in Ducard’s pained eyes. The pair are a masterclass in comics, with bold linework and a vivid color palette.

I don’t often mention lettering, but Pat Brosseau can’t go unsung for his contributions here. His work is key to establishing Foundling’s inner thoughts, to say nothing of how Bruce feels, as seen in his diary-like entries. He makes the characters’ voices visually distinct, adding emphasis when needed.

The Bruce/Lucie relationship concludes for now as it should. She won’t stop or change and has nothing else to teach him. As attractive as he might find her, he’s dedicated to his mission, to filling this broken hole inside him.

It’s this void in his heart that also frightens Lucie. Zdarsky puts Bruce in a scenario where he is in full, unrestrained vengeance mode and it is terrifying for those who witness it. Di Giandomenico’s art leaves nothing for the reader to question when it comes to how Bruce is feeling. It’s written all over his face as he fails for the first time. The scene is horrific and tragic, leading Bruce to a revelation.

It’s fortuitous that this issue comes out fast on the heels of The Batman as there are a few thematic similarities. While Bruce and Alfred don’t share a scene, Zdarsky will pull at your heartstrings by the issue’s end when it comes to their feelings for each other.

While there is no cape and cowl, this is a Batman comic through and through. Zdarsky provides all the trappings readers are familiar with, minus the costumes of course, and ramps up the stakes, both physically and emotionally. We are in for a treat when he takes over Batman! The visuals are top-notch, blurring the line between comics and cinema. With an enthralling story and a variant cover spotlighting The Batman, this issue is sure to fly off the shelves! Don’t miss it! – Javier E. Trujillo