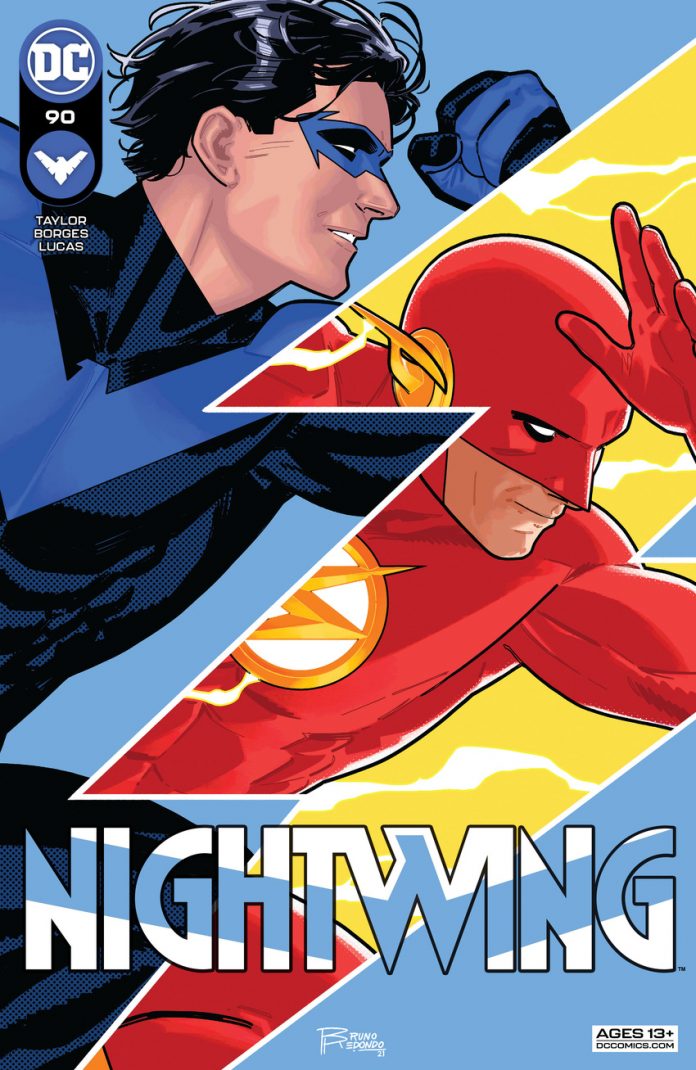 SYNOPSIS: A Nightwing and Wally West story, part 1 of 2! When it’s easier to go buy bagels as Nightwing than as Dick Grayson because everyone is either trying to get him for his money or kill him for the price on his head, Nightwing realizes he’ll need to enlist the help of his Teen Titan friends as his bodyguards, and the first to volunteer is, of course, his best friend…Wally West, a.k.a. The Flash!

If for whatever reason you thought Nightwing stories were due for a slump…it’s just not gonna happen.

As we enter “Get Grayson” part three Blockbuster has grown tired of assassins failing to murder Dick Grayson and has hired someone with a knack for overkill.

Cut to the appropriately named “apartment of Haley and Dick Grayson,” Grayson is passed out with Haley and/or Bitewing the dog by his side before he’s warned of the impending danger.

Writer Tom Taylor has Grayson at his most relatable by giving us a thought bubble explaining how the hero grapples with the do-not-disturb setting on his phone. On one hand, he has to keep the Bat-family chat silent in order to get *some* sleep but keeps select numbers active in case of a life-threatening emergency.

Quick side note: this issue is out the day after National Napping Day and Grayson does state that he, “can’t overstate the importance of naps.” If that line was planned to coincide with such a random day that’s damn fine long-term planning.

I won’t spoil all of what follows but we’re treated to a packed story that has a major rescue operation, one clever quip/takedown of female characters being “fridged,” a previous story thread coming back in a big way, and a gruesome depiction of Wally West’s Flash paying the price for his healing factor not being as fast as his super speed.

Geraldo Borges (AQUAMAN, RED HOOD AND THE OUTLAWS, and NIGHTWING‘s New 52 run) is credited with the art for this one and his work is seamless compared with Bruno Redondo. I didn’t even notice a difference until I read the credits on page 10.

The friendship between Grayson and West especially made this a swell team-up. West’s Flash gets to play strategist here and it was refreshing to hear a character outside of the Bat-family come up with a clever ploy to deceive the bad guys. The fact that West hasn’t been kept up-to-date on Grayson’s life events makes this a good issue to start reading NIGHTWING or for casual readers to catch up.

NIGHTWING #90 was the most memorable no-powers hero/speedster team-up since BATMAN/FLASH: THE BUTTON and is well worth your time. – James Armstrong