SYNOPSIS: A new foe called the Mirror has joined The Dark Knight’s rogues gallery-but is there more to this villain than meets the eye? Or is he simply a reflection of the world around him? As the Bat-Family find themselves on the run from the Mirror’s army, Damian Wayne lurks in the shadows, plotting his next move in a cat-and-mouse game between father and son that can only end in disaster! 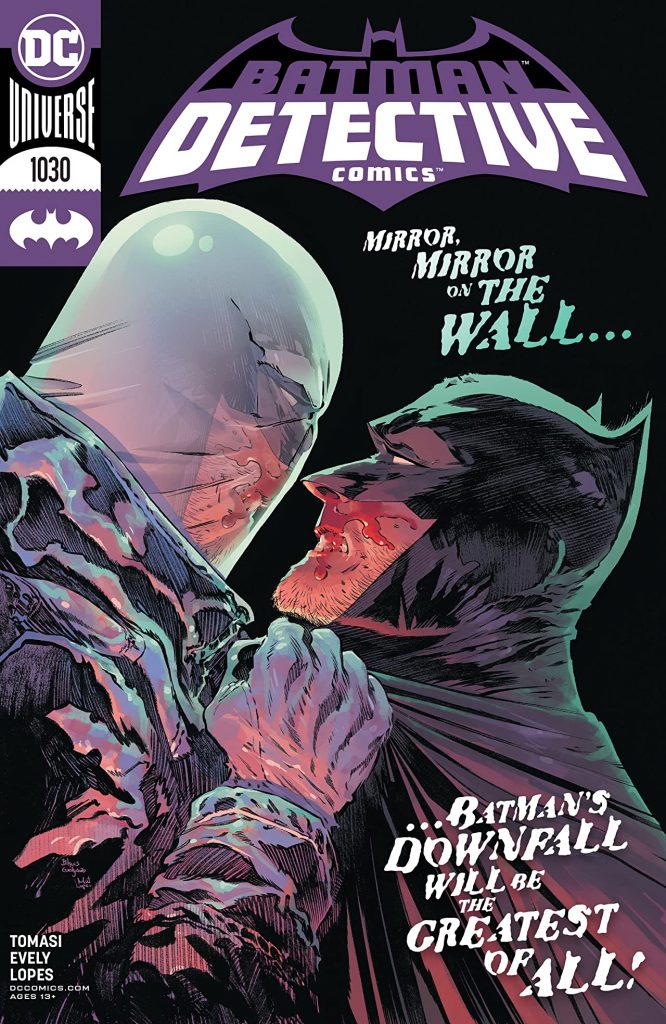 Tomasi gives the reader a lot to process in this issue from the first page to the last.  If you have been reading my reviews you know I love when a book gets personal, gets into the trenches of the character and Tomasi does it masterfully here.   The artistic pairing of penciller Bilquis Evely and colorist Mat Lopes provide a unique and retro look to this book.  The artwork looks like it was heavily inspired by the comics of the late ’70s/early ’80s.

Tomasi dives deep into the psyche of all of the main characters, mayoral candidate Chris Nakano, The Batman, and the people of Gotham.  We see what drives the Nakano campaign against the city’s masked vigilantes.  This is a personal effort unlike any political angle we have seen in Gotham in a long, long while. Showing that Gotham will be feeling the effects of The Joker War for some time.

Tomasi has left his stamp on Batman by digging into the relationship between The Dark Knight and his son, Damien.   Here in this story is where you can say Tomasi gets the most personal between father and son.  I don’t think the “loss” of a Robin has ever hit Batman as hard as this.  Seeing Batman reflect on Robin quitting is an emotional trauma unlike any other.  While Jason Todd’s death did leave a lasting impact on the character for years, this feels different.  Yes, Todd was taken from Batman leaving him with guilt. Here Damien quit, leaving on his own brutal fruition.  While one can compare this to Grayson’s exit the difference here is the impact of his own son deserting him. That is the emotional force of the story.

Bilquis Evely is the latest artist that I have become acquainted with on Tomasi’s run and I have nothing but high praise for her artwork.  I instantly got Jim Apparo vibes as I started reading this book.  Evely’s artwork seems very vintage, with thin lines and lots of sketch detail. As I was reading this book digitally I kept saying to myself “this looks like the old paper”. It was like I could feel the grain as I was swiping my pages.

There is a lot of emotion in Evely’s pencils, from the fiery blaze of Nakano’s nightmares to the splash page of Batman holding the R insignia.  The way she draws the eyes of the character really packs an emotional punch.  I’ve never seen a more powerful page of a sad-looking Batman.  Her cape work is exquisite, seeing Batman glide and drop from rooftops reminds me of Todd McFarlane’s Batman #423 cover.  That mixture of black and dark blue with some harsh angles, this is the closest I’ve seen an artist come to that.

No small detail goes unnoticed on the rooftop scene, from the bricks and pipes in the background to the expressions on every member of the Bat-Family.  Their concerns are on full display as they discuss becoming the prey of the city, an incredible selling point.  Batman, Nightwing, both Batgirls and everyone else has time to shine.

As I did in my review of Detective #1028 I have to give props to the colorist.  This time it is Mat Lopes.  Lopes is a perfect companion to Evely’s pencils, driving the retro feel in the book.  If you are to ever use purple for Batman then Lopes’s work should be the reference point.  Seeing a purple-esque silhouette of Batman in an inferno might be my favorite panel in this book!  I can’t get enough of the warm and cool colors used throughout the city,  perfectly balanced.  The colors shine through the windows as Batman glides past them allowing the character to pop on the page.  There is this wonderful aura in the distance of the city that provides a fantastic backlight at some points.  I am really digging this new approach to Gotham City and as Trish Mulvihill did in #1028 it really adds something new to the landscape. I hope we see more of this in upcoming issues.

Detective Comics #1030 is a really powerful issue with loss being the main theme.  Nakano’s motives are very relatable and understandable while Batman is suffering from everything going on with Damien, who happens to have his own agenda.  I’m not sure who the true villain of this arc will be but it sure as hell looks like it’s going to be a great ride.  This feels early on like it might be Tomasi’s best tale yet! – Peter Verra

TDK10 – Lest We Forget, THE DARK KNIGHT is Awesome