With director Patty Jenkins back at the helm and Gal Gadot returning in the title role, WONDER WOMAN 1984 is Warner Bros. Pictures’ follow up to the DC Super Hero’s first outing, 2017’s record-breaking WONDER WOMAN, which took in $822 million at the worldwide box office. The film also stars Chris Pine as Steve Trevor, Kristen Wiig as The Cheetah, Pedro Pascal as Max Lord, Robin Wright as Antiope, and Connie Nielsen as Hippolyta. 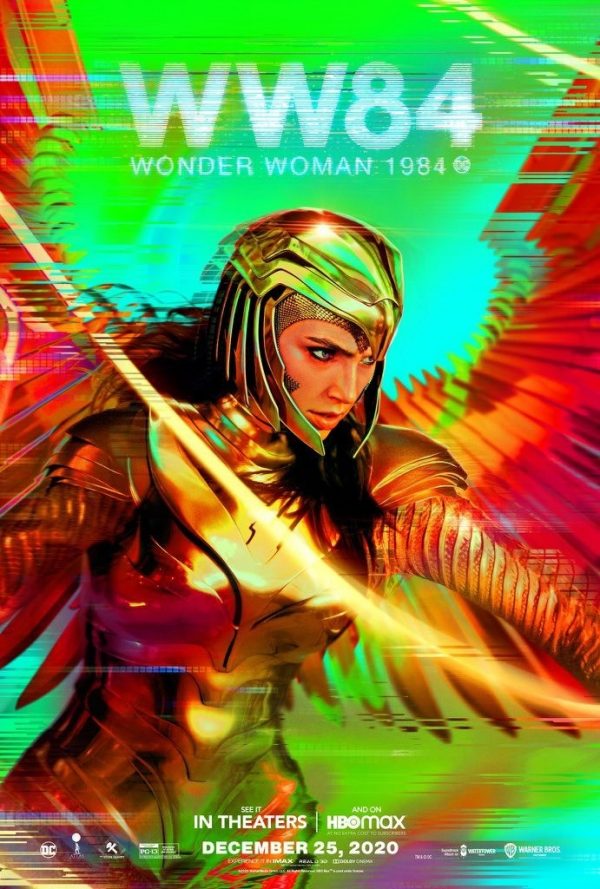 Let me start by saying that I love the original WONDER WOMAN, I adore Gal Gadot in the title role (she’s awesome, again), and I’m very happy that director Patty Jenkins is the current cinematic guardian Princess Diana of Themyscira.  BUT…

I’ll explain why in a bit, but first, a quick spoiler-free rundown on the plot…

After a tremendously over-the-top and unneeded (except for one thing that plays out at the end of the film) opening sequence set in Themyscira featuring a young Princess Diana, the audience is whisked away to 1984 (Duh!) — 60-plus years after the events of the original film.  After what is essentially a second opening scene featuring Wonder Woman taking down some bad guys at a very 1980ish mall, we discover Diana Prince (Gal Gagot) working at the Smithsonian National Museum of Natural History in Washington, D.C. as an anthropologist.  While not on her civilian job, she does Wonder Woman things as, well, Wonder Woman (though no one apparently knows that she really exists) and pines (pun intended) away for her long-lost love, Steve Trevor (Chris Pine).

But Trevor’s not long-lost anymore come 1984!

I won’t tell you how he comes back from the dead, but it’s tied to the film’s main plot — a riff on THE MONKEY’S PAW and a message of people better be careful of what they wish for (You know, like a shared DC on film universe after MAN OF STEEL).

This theme of a wish granted coming with a price affects not only our hero but the film’s two main baddies as well — “businessman”/grifter Maxwell Lord (Pedro Pascal) and Diana’s nerdy/introverted/socially invisible colleague, Dr. Barbara Minerva (Kristin Wiig).  Lord goes on to be a maniacal, power-obsessed villain intent on taking over the world, while Dr. Minerva slowly transforms into the classic Wonder Woman villain, The Cheetah.

Pascal induced many instances of eye-rolling due to his over-the-top performance — the likes of which we may not have witnessed since Jim Carey played The Riddler in 1995’s BATMAN FOREVER.

I found Wiig’s Dr. Menerva one of the film’s bright spots and maybe the only character that really resonated with me.  Her depiction of Barbara’s personality transformation was excellent.  The only downer was her full-blown Cheetah — brief and very CGI.  And was she really a villain?  It’s almost as if they stuck the character in the film just for the sake of having Wonder Woman’s main adversary in it.

The main plot aside, my main issue with WONDER WOMAN 1984 was 1984.  Frankly, 1984 had nothing to do with this movie and could’ve been set in any year ending in a 4.  Plus as someone who lived “1984” (I graduated from high school in that year), all of the 80s stuff in the film comes off more like what people think 1984 looked like in retrospect today.  If you’re going to set this thing in the middle of the Cold War, then use it as part of the plot!  They do very briefly in the finale, but unless you were alive during that period and/or a student of history, you probably won’t get it.

Back to Steve Trevor’s miraculous resurrection…

As I said, I’m not going to spoil the “how” he returns, but while I get the character’s inclusion — again, it’s related to the main plot — he doesn’t really have much to do except following Wonder Woman around and be there for Diana to swoon over him.

Yeah, I know they have to use a lot of it (Or do they?) for these type of films, but does it have to look like obvious CGI and a video game.  Chalk this up as quibble, I suppose.

My wife — “Announcer Rachel” — really liked this movie.  Perhaps it will appeal more to the ladies than dudes…especially if you’re an English teacher.  AND…

Make sure you stay for the post-credit scene because it’s awesome.  (And thankfully, it’s not another MCU facsimile used to promote another film or set up a future team-up film.)

All in all, WONDER WOMAN 1984 is “just OK” and does not surpass — or come close — to its predecessor.  I totally get the point of the main plot, but it just didn’t do it for me.

However, that does not deter me from wanting to see another Wonder Woman film because I love the original WONDER WOMAN, I adore Gal Gadot in the title role, and I’m very happy that director Patty Jenkins is the current cinematic guardian of our beloved Princess Diana of Themyscira.  Even if WONDER WOMAN 1984 is “Just OK.” – Bill “Jett” Ramey