SYNOPSIS: Gotham City has always been dangerous-but now, it’s downright deadly! Following the tragedy of “A-Day,” the mayor allowed the private law enforcement group known as the Magistrate to take over policing so-called mask crime-and that has given rise to a new Dark Knight! What is this mysterious crime fighter’s connection to former Batman weaponeer Lucius Fox? The fight for justice has never been this dangerous! 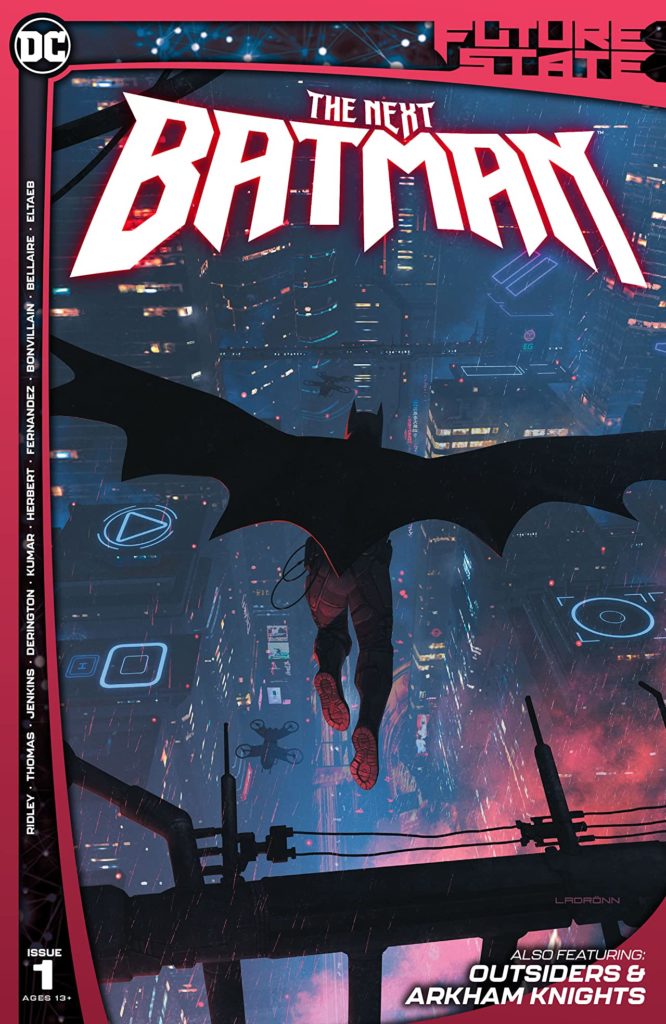 THE NEXT BATMAN arrives in the, um future, and a Gotham that seems cleaner and futuristic, but is still dangerous. The city is in a heavy police state, where a group is targeting anyone who wears a mask. Our new Dark Knight arrives in the shadows, continuing the heroic crusade against injustice. While we think we know who is under the cowl, it’s never revealed and we don’t even get a hint of a chin. We know for sure who it isn’t: Bruce Wayne, who was the victim of some incident that is mentioned, but never explained.

For an event we were teased months ago, I wasn’t looking forward to “Future State.” I felt like it was another DC gimmick that we usually are dealt every few years. Nevertheless, I was going to approach it open-minded and give this series a fair shot. And the end result, at least of the first chapter, is it’s okay.

Academy Award-winning writer John Ridley (12 YEARS A SLAVE) is in charge of scripting duties for this issue (which will have 4 in total). I think he had good pacing and set us up well for this new world. What I think it lacked, however, was any kind of hook. It’s like we were introduced to this new era and then the issue was over. Who is under the cowl? Why? What injustice is this Dark Knight out to face? We aren’t really given much to latch onto, and I feel like that left me feeling underwhelmed.

The art was top-notch. Nick Derington (who has had a variety of work in the DC universe) pencils some really great characters and Gotham in this issue. I loved the coloring that complemented his style, and while we are in a cleaner Gotham, it still carried an atmosphere and a mood. I was very impressed with the art and can’t wait to see more.

Buyer Beware: this issue comes with a heavy price tag. While the cover belongs to Batman, his story is only 1/3 of the book, with the other parts being OUTSIDERS and ARKHAM KNIGHTS (which I had no interest in).

While this book is just the beginning of a four-part story, I generally felt unfulfilled. Ridley is an extremely talented writer, so I hope he bounces back with the remaining issues. That said, the art was fantastic and I’m intrigued just enough to keep reading. – Ryan Lower