SYNOPSIS: The only thing standing between an insane, heavily armed Peacekeeper-01 and a high body count in Gotham City is Batman. Their first bout didn’t go well for the Dark Knight, but the city is on the line and he can’t let the Scarecrow’s master plan come to fruition…and whose side is Miracle Molly truly on? The penultimate chapter of “Fear State”! Backup: With the Bat comms unreliable, Oracle has instructed the Batgirls to stay in the Clock Tower while she and Nightwing investigate who’s behind the Oracle Network hacks. But with the Magistrate’s forces instructed to attack the Clock Tower, will the Batgirls make it out before it’s too late? 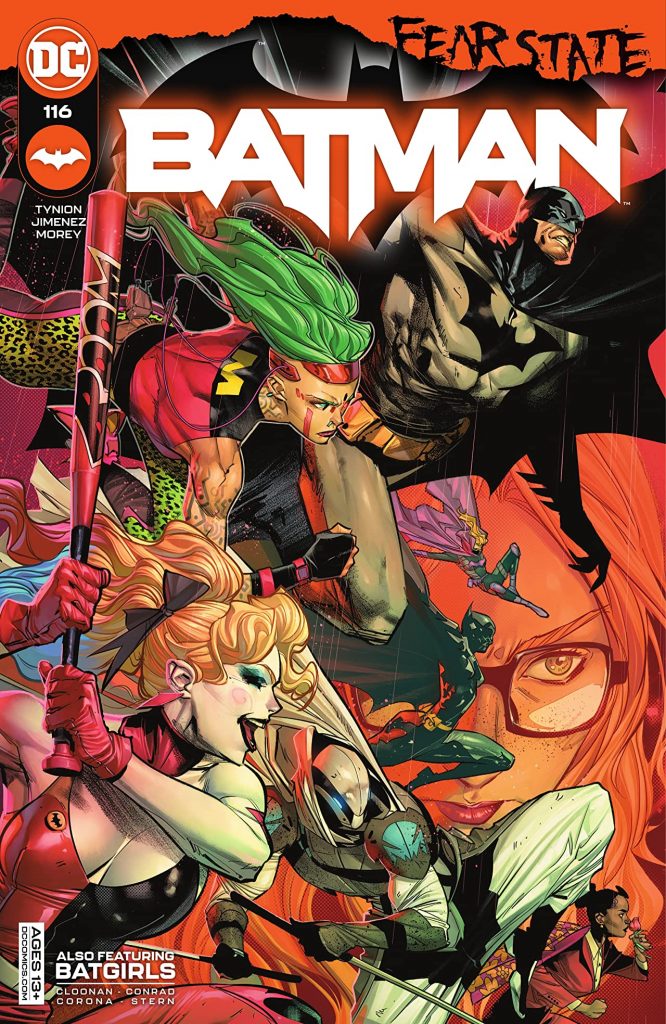 The penultimate chapter in the “Fear State” event is out this week, in the pages of BATMAN #116.

And folks, something happens.

Not much, but something happens. So that’s a start.

I’ve been tough on this book (by my reviewing standards), but I stand by it. The book lately has simply not been good, and sometimes just flat out BAD.

This latest issue doesn’t change my perception much, but something does happen. Batman and Miracle Molly are underground, trying to track down a brain-machine Scarecrow has hijacked because he’s going to use it….to do something….with fear….somehow. This confrontation is cool, albeit brief. The stakes rise for a page or two but then is resolved.

But again, it’s something.

The rest of the book is forgettable, and confusing for those (most?) of us who haven’t read all of the other tie-in chapters. Ghost-maker takes out a bunch of Simon Saint’s soldiers, because….he needs something to do? Poison Ivy is pissed off because….she’s angry?

The story is a mess, but thankfully we have Jorge Jimenez on this book. I wish this talented artist had a better tale to draw for because some of his work is really damn good. He has some excellent panels here, whether it’s Scarecrow brooding, or Batman battle-ready, or The Dark Knight engaged in some fisticuffs. Jimenez has been a highlight during this run, and I look forward to what he does next.

Overall, nothing in BATMAN #116 has changed my opinion of this book. The story is convoluted and messy, and the art has moments of brilliance. No need to buy this one if you’ve been passing.