SYNOPSIS: The world thought Bruce Wayne was dead. They were dead wrong! When the sinister para-military organization known as the Magistrate seizes control of Gotham City, the original Batman went big to put them down…but even The Dark Knight couldn’t predict how far this evil force would go to stop him. Now, Bruce Wayne is on the run! From Eisner Award-winning writer Mariko Tamaki and rising star artist Dan Mora, it’s the story of a Batman pushed to the brink-with nothing left to lose. 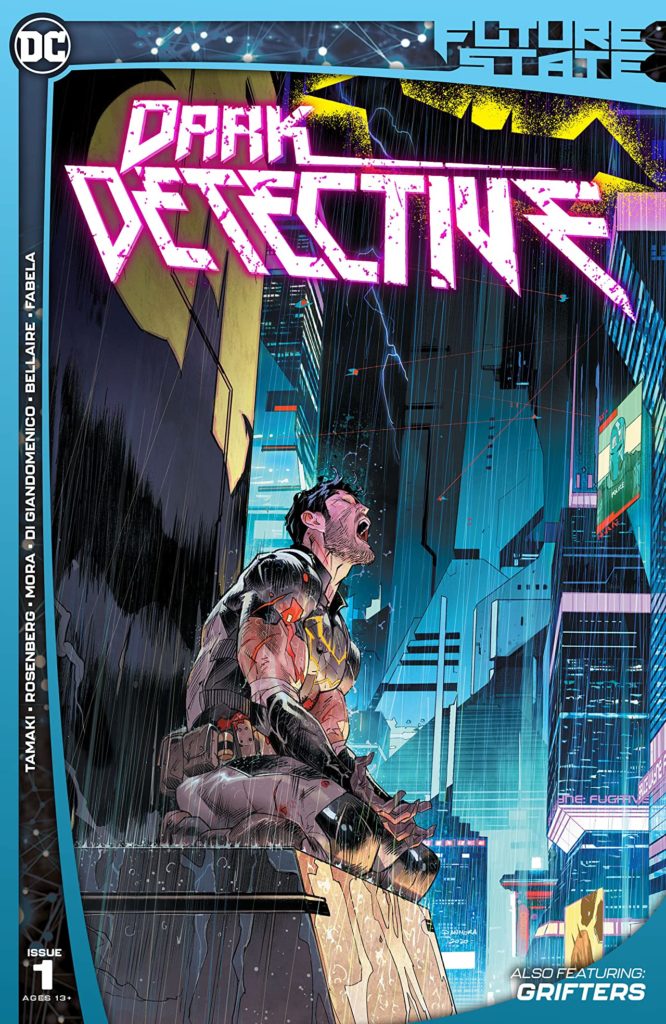 Well, the time is here.

As Jack Napier said in BATMAN, “Time to think about the future!”

We are two weeks into the two-month mini-event (is this the proper term?) DC Future State.  We welcome aboard a new creative team in writer Mariko Tamaki and artist Dan Mora.  Tamaki recently finished an arc on Wonder Woman, issues #759-769 that I enjoyed. Giving me a solid sample size of her knowledge of the character and mythology.  While Wonder Woman and Batman are two entirely different characters I was able to see Tamaki was up to the challenge.  This issue is my first taste of what Mora can bring to a book not having anything to go off of firsthand.  Based on what Tamaki said recently at CCXP and the enthusiasm I got from some Twitter interactions I was feeling the hype.

So let’s get right into it cool kids!

Tamaki uses a nonlinear narrative to tell her story and it is not confusing at all, the story flows well.  Things are a bit different in the DCU post-Scott Snyder’s Death Metal as we bounce back and forth from “then” and “now”.  Both Bruce Wayne and the Batman are confirmed dead while Mayor Nakano has delivered on his promise to eliminate the vigilantes in Gotham. We are introduced to Nakano’s lead enforcer Peacekeeper-01, who seems to know Bruce Wayne’s secrets and might be the one who eliminated both of Gotham’s favorite sons.  Peacekeeper-01 has Gotham under a militant state of control monitoring the city with drones in his Oracle-like command center.

Tamaki writes a Gotham that seems almost too similar to a city in our reality.  A city that doesn’t seem to be mourning the death of Batman or Bruce Wayne since they are nose-deep in their phones.  Bruce does some soul-searching in this issue, at times it feels like he is unsure if the Batman should return but by issues end the Batman has reemerged. Making his presence felt in an old-school Batman way. I enjoyed the internal conflict Tamaki is using with Bruce showing that he can’t give up Batman and he can’t stop helping people in need.  This is his addiction and the Batman we all have come to know and love.

Mora’s artwork is a sight to behold and Jordie Bellaire’s color steals the show.  Mora uses thin lines and gets tons of detail in every panel.  From the nooks and crannies of the buildings to the hatching of facial hair, this is one of the more detailed books you can look at. Gotham City itself is a character in this issue, Batman Forever‘s Barbara Ling would be smiling ear to ear but I’m getting hardcore Blade Runner 2049 vibes.  Various colors of neon light up the streets, interactive advertisements spam people as they pass by, Mora and Bellaire are kids in a candy store and it’s on full display.

Mora’s panel placement at times is just as creative as Brad Walker’s.  Mora uses overlays and rectangles with interesting angles showing off his creativity.  This is not a book that uses traditional layouts, for example, there is a grand splash page of Gotham’s Times Square giving a taste of the advertisements and billboards. On the next page, Mora uses the ad space on the building for panels, truly a brilliant form of storytelling, using the most out of every inch of page space.

Mora’s does what all great artists use to sell emotion, facial expression.  You know exactly what Bruce and Batman are feeling from the look on their faces. The grimace of Batman under the knife, the shock of seeing his memorial on a billboard to the misery when he can’t take it anymore.  The emotion bleeds through the page.  If that was not enough the action panels show off Mora’s range and strengths. From the simple scenes of Bruce running through Gotham Square to the action scene of Bruce running from drones, everything looks larger than life and on a grand scale.

The new Batsuit is homemade without a doubt. He looks like he is wearing hockey pads, shin guards, and biker gloves under his clothes with a spray-painted chest logo.  It’s the one thing I’m not digging but I understand the point of a suit like this for a Bruce Wayne at this stage of his life.  Long gone are the millions of dollars that Wayne Enterprises R&D can spend on tech.  This Batman makes his toys from whatever he can find.

One issue into Dark Detective and I am drawn in.  Tamika unwraps a lot in her first issue. This is a Bruce Wayne trying to find his place, this a Batman starting from square one.  Wayne is broke and at the end of his rope but there is one thing you can never take away from Bruce Wayne the mission, he will always be there to help those in need, and no matter what his mental or financial status is that will not change.  Dan Mora is just another artist who graces the pages of a Detective title spoiling the reader with his imagination.  He might be the most creative artist I have had the pleasure of reviewing since I started in 2017.  Dark Detective puts Batman in an impossible situation, against all odds and that is where the character excels.  I can’t wait for issue two! – Peter Verra