SYNOPSIS: So far, Selina Kyle’s ambitious plan to gain control of Alleytown has been going purrfectly, but she’s about to run headlong into a brand-new foe-and pass right through them…? Riddle us this, Catwoman! What do the Khadym mob, a non-corporeal assassin, and Poison Ivy have in common? And when it comes to solving riddles, there’s only one person Selina can go to-no matter how much she hates the idea. 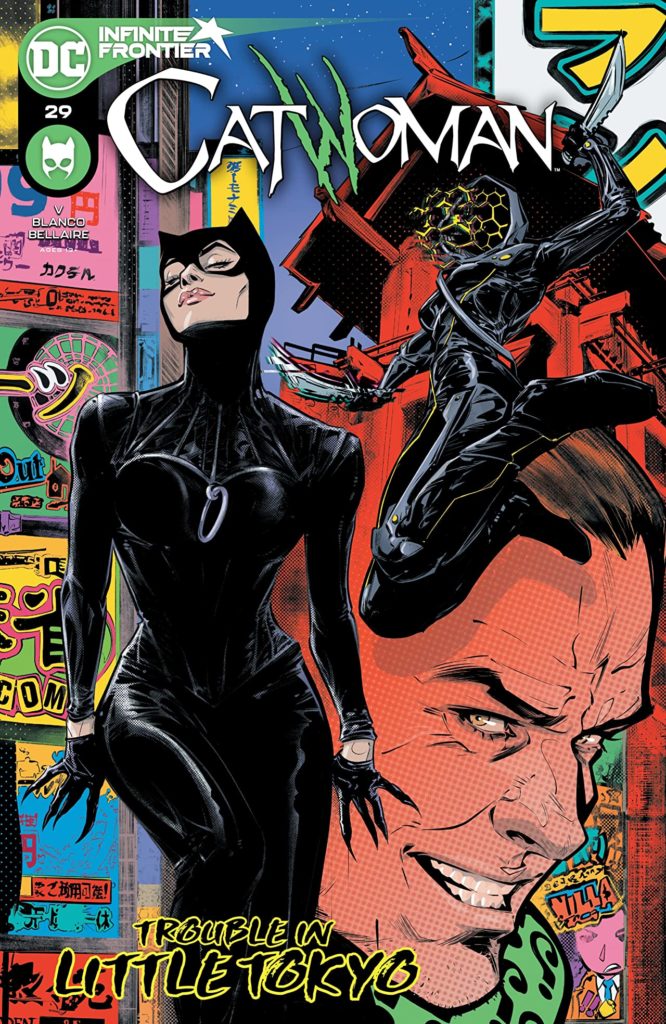 Future State is gone for now (and that’s largely a good thing), so that means that Ram V’s Catwoman story can continue to unfold after leaving us on quite the cliffhanger in December!  Some bad guys have been synthesizing a compound from their comatose prisoner, Poison Ivy.  It appears to be some sort of a drug, or a weapon (or both), and Catwoman is on an investigative journey to see who is behind it all!

Little does she know that a high-tech, wraith-like assassin is on the prowl in Gotham as well, slashing down any obstacle in her wake.  And then there’s the elusive, enigmatic Father Valley, who has a contract to kill Selina and yet proceeds to save her fur over and over again.  It’s bound to be one heck of a night in Gotham City!

I’m glad this title is back after its 3-month hiatus.  I genuinely like what Ram V is doing with it – he is playing the long game, building his world, and providing us a long story that is unfolding over many issues.  It feels more like a crime epic than a “casual reading” comic.

Something in this book immediately grabbed me, and I had to pull up my previous reviews until I found what I was looking for – Catwoman #14 had this character that reminded me of Ghost from Ant-man and the Wasp, and that character resurfaces here – she’s an assassin that can phase through objects.  She’s half Ghost and half The Invisible Man from the 2020 film, and Ram V finally gives her a name – the Wight Witch.  While the character is cool, she is so terribly reminiscent of these other villains from recent media, I find it disappointing.  But we’ll see how she’s used moving forward.

What isn’t disappointing is the artwork this month.  Fernando Blanco seems to have taken it up a notch – there are some fabulous panels here, and the action sequences have plenty of movement.  One thing that may be improving Blanco’s art this month is the fact that it is bolstered by Jordie Bellaire’s incredible colorwork.  For a while now, FCO Plascencia has been on coloring duties, but Bellaire’s entrance onto the scene has really caused an uptick in quality.  The lush, yet toxic greens if Ivy and her plants, the vivid yellows and flickering pinks of the Wight Witch’s outfit… the Catwoman book looks terrific this month.  Jordie is welcome back any time.

This is another solid entry in the Catwoman series.  Ram V is doing an excellent job building the layers of this story and allowing himself to take his time with the characters.  Be sure to grab this one if you’ve been digging what he’s been doing so far. – JF

SYNOPSIS: Nightwing is back-and his drive to keep Blüdhaven safe has never been stronger! But his adopted city has elected a new mayor with the last name Zucco. When Nightwing enlists Batgirl’s help in investigating the politician bearing the same name as the man who murdered his parents, she unearths details that will shock and fundamentally change the hero. After a couple of months off so the FUTURE STATE storyline could happen Dick Grayson returns to comic book stores, or digital formats if you’re into that, in NIGHTWING #78.

The advance reviews were overwhelmingly positive and with the INJUSTICE writing/artist combo of Tom Taylor and Bruno Redondo taking over reins from Dan Jurgens I was hyped as well. To date, INJUSTICE is one of only three comics that have brought me to tears … specifically because of a plot point involving Nightwing!

First, a major tip of the hat to Adriano Lucas, the colorist. The pages in this issue were oh so pleasing to the eye with hair colors, red/pink sidewalks, and back alleys making me pause longer than normal before turning the page to take everything in. Bludhaven has never looked bloodier.

Second, this checks all the right boxes for a Nightwing story: you know he’ll do his damn best to do the right thing and be a smart-ass while doing it. In this case, we get two moments along those lines. One has Nightwing save a three-legged dog from a bunch of punks and another is a flashback where a younger Grayson and Barbara Gordon help out a kid being bullied by an entitled little prick.

There is a small quip at the expense of the amnesia story arc Grayson just went through. As someone who defends that storyline (though I freely admit now it had a CITY OF BANE problem where it went on a few issues too many), I was concerned this joke would be a low blow. But it came across just fine and, in the context of saving an animal, the punch line gave me a flashback to SNL‘s Toonces the cat skit!

Although, it should be said that I think Babs had the funnier lines in this Nightwing issue!

We also have a swell heart-to-heart moment between Grayson and Alfred during the flashback sequence. This leads to a revelation in the present time which I won’t spoil and am still taking in.

Finally, NIGHTWING #78 is not without fault. This isn’t a spoiler since it’s mentioned in the description, but Bludhaven has a new mayor and she’s the daughter of Tony Zucco, the man responsible for the death of Grayson’s parents. With Nightwing storylines post-Rebirth revolving around villains like Raptor and the Court of Owls, all with ties to Grayson’s days at the circus, it’s starting the feel like the series is getting overcrowded with villains from his early years.

As always, I’ll reserve judgment until I see more of a character but my first impression is the villain is a tad redundant.

NIGHTWING #78 is a well-timed shot in the arm for the series that will (hopefully) bring back people turned-off by the amnesia storyline and continue to prove that Grayson is truly “better than Batman.” – JA