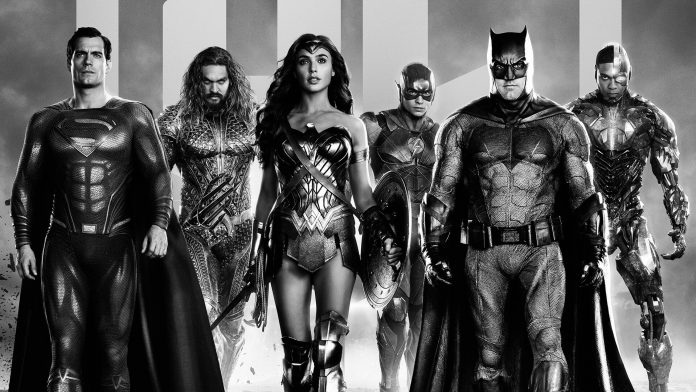 The superhero film that’s taken the longest, most unpredictable path to release is finally available. ZACK SNYDER’S JUSTICE LEAGUE is a 4-hour DC showcase that I found personal, moving, and entertaining.

Free of restrictions, director Zack Snyder surprisingly turned everything down a few notches from previous films, and the outcome is all the better for it.

While many of us watched the version released in 2017 (and many of us didn’t), a lot of the core elements have carried over. Darkseid has sent Steppenwolf to Earth to find three motherboxes, and our superheroes must come together to stop an invasion. All of the action scenes (minus a Batman one) show up here as well. A major benefit is that they’re fleshed out. We get more connectivity into the why and how events are unfolding, with extra Snyderness sprinkled throughout. Will it completely change someone’s mind on the movie? I doubt it, but the explanations benefit the experience.

The acting, like in most Snyder movies, was pretty good across the board. Everyone gets more screen time, which only helped their characterizations from the 2017 version. Gal Gadot’s Wonder Woman, again, was glowing every time she was on screen. Jason Momoa’s Aquaman was toned down from the “Yee Hoo” surfer dude, and I mean that in a positive way. Ezra Miller’s Flash was lighthearted and dropped the quirkiness. Though overall better than 2017, I’m not entirely sold on his Barry Allen. Ray Fisher’s Cyborg was more of what we saw in the previous version, which I liked. Henry Cavill does what he can with the little amount of screen time he had. Lastly, Ben Affleck’s Batman was much closer in line with the iteration from BATMAN V SUPERMAN than what we saw in JL2017.

There were a few elements that didn’t sit well with me, and surprisingly came toward the end. The Deathstroke/Lex Luthor scene, which I thought was cool, feels like a tease for a payoff that may never come. I’m one who liked Jesse Eisenberg as LL and will always take more. “Hot Joe” Manganiello looks just like Deathstroke, and I want more of that. But this scene serves as a setup for Ben Affleck’s Batman, which I don’t believe will ever happen.

The inclusion of Martian Manhunter doesn’t add up, once you take a minute and dissect it. Of course, the appearance of J’onn J’onzz is a gift for DC fans, but having him sit on the sidelines this whole time gives the sense he was a last-minute addition.

Speaking of last-minute additions, the new Knightmare sequence. This scene fell completely flat for me. The dialogue between Batman and The Joker was off, carried no weight, and felt like two actors trying too hard. And again, it provided a tease that we don’t know will get paid off.

A few other quick notes about the movie:

• I really liked Junkie XL’s score, especially new music renditions from MAN OF STEEL (his version of “Arcade” during the Superman fight was great).
• Amy Adams was given time to effectively mourn her loss.
• More Bruce and Alfred moments are always a plus.
• I prefer the blu-suited Steppenwolf.
• Darkseid looked good.
• Some humor was off, but nothing was cringeworthy.
• The ending boom tube between the heroes and Darkseid was badass.
• I really enjoyed Flash’s big moment.
• The three F-bombs were whatever.
• I’m surprised how many scenes were shot by Snyder.
• Thank God “I don’t…not…like you” was scrapped from this movie.
• I don’t care about the aspect ratio, and most people don’t either.

If you’re reading this, you’ve most likely watched ZSJL. Your mind is made up. It’s a 4-hour movie that’s really hard to condense into a review without constantly going off on different tangents. I believe this is an overall better movie. I also don’t think the 2017 version is a bad movie. For a myriad of reasons that most of us will never know, decisions were made actions were taken on the production of each project. All that matters is that we have two options to choose from, and some may say “neither.”

And that’s fine. This road to ZSJL has been exhausting, rewarding, and ugly for fandom.

To paraphrase my BOF brother Garret Grev, it’s ironic that in celebrating our love of heroes, some of us can act like villains.

Regardless of our stance on this film, we should strive to be better for the next. – Ryan Lower