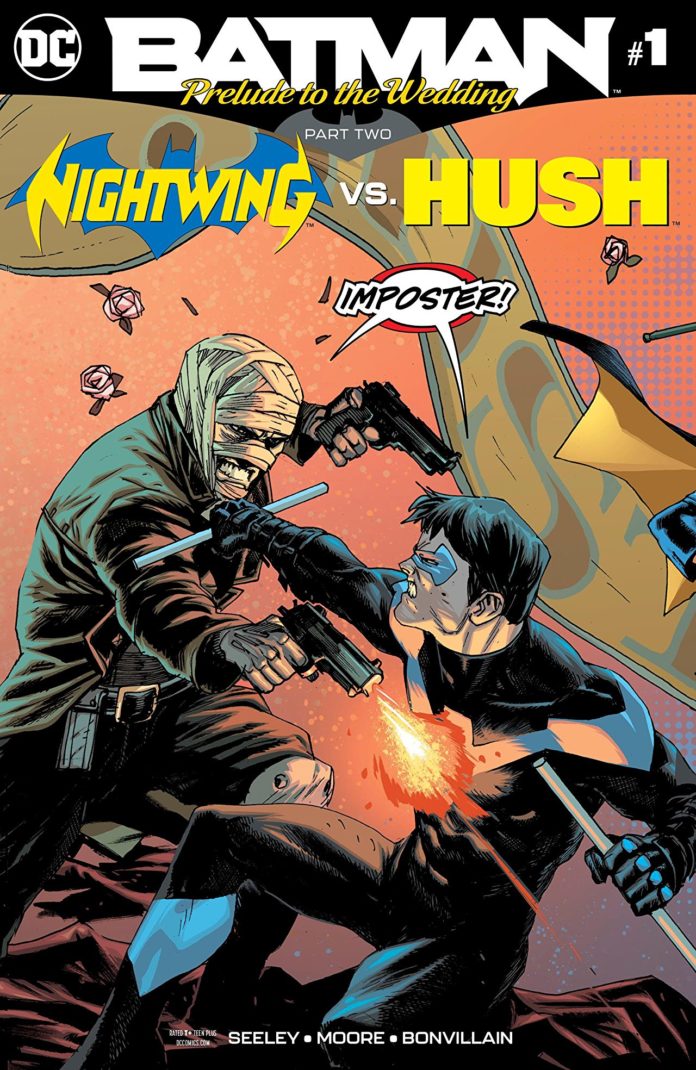 SYNOPSIS: Dick Grayson has a lot of responsibility. Being the original partner to Batman, he’s the natural choice to be Bruce Wayne’s best man. So if anyone has to get to the wedding, it’s going to be him. Too bad Hush has other plans-and maybe Bruce Wayne does, too!

Slide down the batpole with me, as Batman heads out to his bachelor party!

This issue starts out great. Batman, Nightwing and Superman are headed out for a night on the town. It is a bit derivative of BATMAN #37 where Clark and Batman wear costumes to the carnival to blend in, but it is a fun concept. It feels like an episode of BATMAN: THE BRAVE AND THE BOLD if you are trying to find the tone. I think they could have used a different plot device here to get Batman out to enjoy some time with his pals. But this is what we got, so that’s what we need to talk about.

As you would expect, Gotham is never a quiet and peaceful city you need it to be, and chaos erupts. Once we establish that the bro time is not going to happen, Hush crashes the party and he and Nightwing get blasted into another dimension via Superman’s multiversal travel system, A Lightning Door. They end up in a mirror to the current universe called “the Betwixt”, this place exists between the real world and the un-world. It is kind of a purgatory for the forgotten. Nightwing and Hush then team up to fight a bunch of ghost people and bicker for a few pages. Hush is super pissed at Nightwing because Bruce is making Dick his best man…or is he? So since Hush is jealous of Dick’s place in Bruce’s life he goes all SINGLE WHITE FEMALE on him, just not as interesting. But we only have have 23 pages, so what are you going to do? So Hush does what Hush does, and uses plastic surgery to try and make things better. I will not reveal how this all plays out, but I didn’t finish the book wanting to see what else happens to Hush.

Tim Seeley is again on writing duties. As mentioned before, he seems to be channeling the BATMAN: THE BRAVE AND THE BOLD and Lego movie characterizations here and there. I can literally hear Channing Tatum as Superman in his scenes. As for the interaction between Tommy Elliot and Dick Grayson, it came off pretty bland. The end has a good character moment between Dick and Bruce and I think that kind of heart was needed more in the issue. We all crave fisticuffs, but the punches mean more when there is some heart behind it.

Travis Moore did a great job on the art. He has a Clay Mann meets Greg Land feel to his art. His best work is when our heroes are just doing everyday things. I really liked what he did and hope he gets on an ongoing sometime soon. Really good stuff there. Keep an eye out for him.

Our story ends again on a epilogue, this time setting up Batgirl vs. The Riddler.

And away we go.

Overall, this was a step down from the first part. I think Hush is a hard character to grasp if you don’t understand him. I don’t see him as maniacally obsessed as he was portrayed here. He is a bit more of a cerebral adversary. That would have been more interesting if he placed some deeper doubts in Nightwing. This tie does not feel like it is going to go as deep as I would like it. Right now it feels more like a cash in than a necessary read to flesh out the story. – Justin Kowalski

After AQUAMAN: The “DCEU” Ranked