SYNOPSIS: In this issue, Bruce Wayne meets the next Batman! As the dark detective makes his move to put an end to the villainous Magistrate once and for all, the man who once wore the cowl encounters the next Batman-and these two have some questions for each other! Fists will fly as this explosive meeting erupts in the skies over Gotham…but with the clock ticking, can Bruce finish what he started and unlock the secrets of the fascist surveillance that plagues his city? 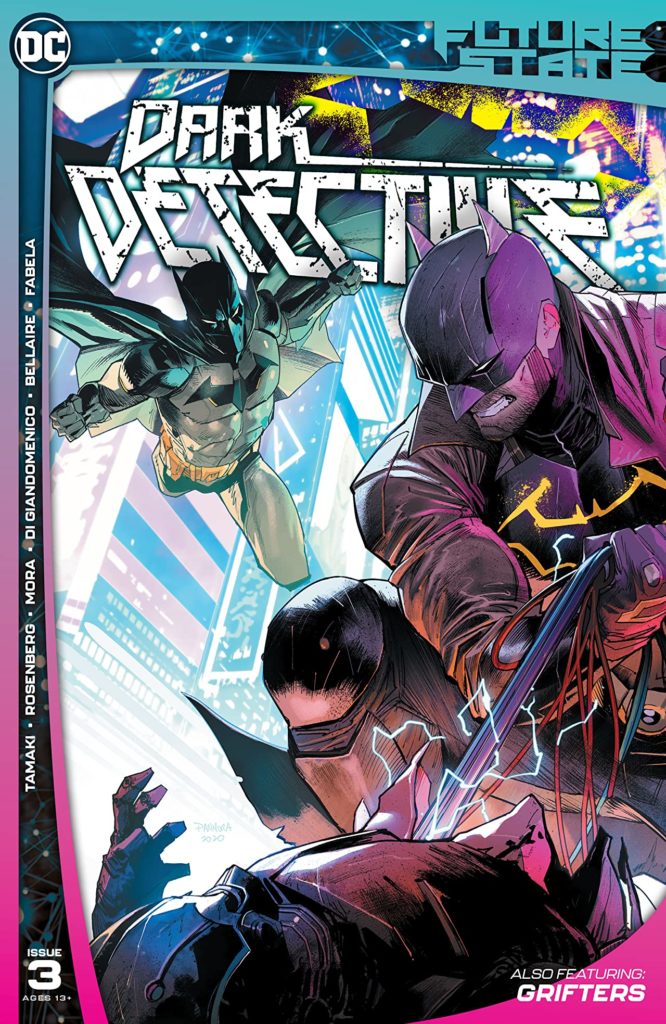 After two stellar issues of Dark Detective, you have to be asking yourself.  Can this title keep me on the edge of my seat? Can the creative team of Mariko Tamaki and Dan Mora keep up the pace?  Well, the answer is HELL YEAH!  This issue solidifies Tamaki’s dedication to the detective aspect of the title.  While artist Dan Mora keeps amazes the reader with his cityscape designs, unique page layouts, and refined character craftsmanship.

Dark Detective issue three is our first real taste at what kind of a detective story Tamaki can deliver.   Another hotshot, big money CEO has been murdered in Gotham City, sparking the interest of the already “dead” Bruce Wayne.  From here, Tamaki takes the reader down a narrative-heavy passageway of investigating justice.  Tamaki leads the reader along the corridor with breadcrumbs that you won’t realize were right in front of your face until issues end.  We see Bruce piecing together why another CEO supplying the Magistrate with tech and gear has bitten the dust—using his personal first-hand experience as one of the more significant clues.  Not only is he piecing together clues to the case, but he is utilizing the tech he has picked off from the drones and cybers of the previous issue.  Will taking his work home with him going to be his ultimate downfall?

There are eyes all over Gotham city, Magistrate, and the Next Batman.  The first meeting between the Dark Detective and the Next Batman goes different than you might expect, but here is where Tamaki shines like a diamond under the sun. “Always a new hero to replace the old one.  Because it’s about a symbol, not a person.  Batman is dead. Long live Batman.”  This quote is precisely what the Nolan trilogy was about, a symbol for people to see, to be incorruptible and everlasting. This moment was a beautiful passing of the torch. Further cementing how well Tamaki knows the character of Bruce Wayne, not just Batman.

Mora’s artwork in this issue is another beautiful turnout.  Mora has added a trench coat that flows in the wind like a makeshift cape, similar to the Knightmare Batman from BvS.  Mora’s skyline shots are something else, more detailed than Batman Beyond, with a hint of the bounty hunter chase scene in Attack of the Clones.  The city is bright and vibrant, a character in itself.  Seeing Mora’s Batman above Gotham looking down “cape” blowing in the wind is such a tease it makes you crave the real deal, and we get a glimpse of that when Bruce and Tim finally meet face to face.  I found it interesting that Mora chooses to illustrate the Dark Detective smaller than The Next Batman.  When these two finally square up, Tim Fox is looking down at the OG.  There is not as much action going on in this issue when compared to the previous two.  We still get some excellent splash pages and some great shots of the gorgeous crouching Mora Batman that we all have come to love as well as that trademark panel creativity that Mora has been delivering. I’d love to know where this guy comes up with these shapes; he never ceases to amaze me three issues into the title.

Issue three is yet another incredible story in this mini-series.  This book relies more on exposition than the previous issues but, at its core, a wonderfully executed detective tale.  Tamaki has a grasp on how Bruce Wayne goes about his business.  While this is not an action-heavy story, the plot leads the way, and the artwork is exquisitely complimentary.  With one chapter left, it seems that the Magistrate and Tamaki have Bruce Wayne with his back against the wall with his small new world about to crash down on him. – Peter Verra

Michael Keaton is in BATGIRL (Updated)