SYNOPSIS: An epic tale begins that will take Batman on a harrowing, action-packed European adventure in a new miniseries by superstar creators Tom Taylor and Andy Kubert! A horrific tragedy in the United Kingdom sends a very personal and deadly message to the Dark Knight—one that will draw Batman out of Gotham City to investigate! From the moment he lands in Europe, Batman will face a difficult investigation and unheard-of adversaries and find the assistance of a partner once more—all in the hunt for the villain known as Equilibrium! New villains! New allies! A thrilling overseas adventure begins for the Dark Knight! 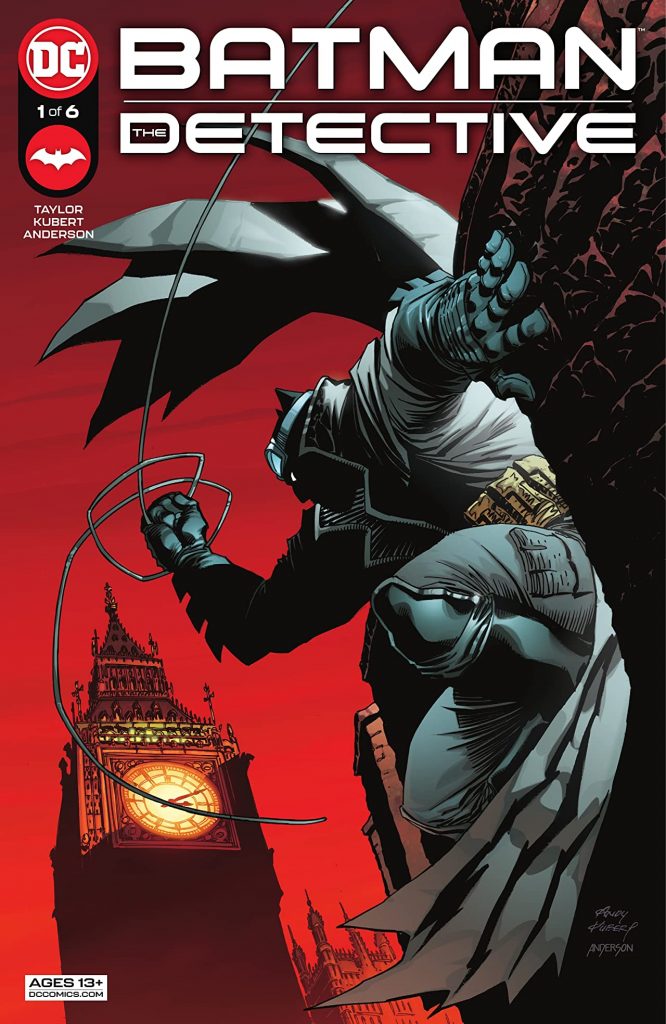 When you team up all-star writer Tom Taylor with legendary artist Andy Kubert, expectations soar higher than ever.

I am relieved to report this dynamic duo has met — and possibly exceeded — those expectations.

BATMAN: THE DETECTIVE is a new 6-issue miniseries, colored by the incomparable Brad Anderson, that is exciting, mysterious, and a visual feast. Traveling from Gotham City to London, a Wayne Airlines flight crashes, taking the lives of 147 passengers. This tragedy immediately grabs the attention of The Dark Knight, who suits up and travels across the pond to investigate. Upon arrival, he meets up with an old friend, makes a new one, and discovers a direct link to the lives lost.

What a great debut issue to this series. Thanks to his critically acclaimed work on DC’s DCEASED, fans are eager for more work from Tom Taylor. The man knows how to write a comic book. He kicks us off with a thrilling inciting incident and brings us back full circle by the issue’s end. It’s not necessarily a cliffhanger as much of an interesting addition to the story. Taylor locks us in from the first few pages and keeps this issue, and story, moving right along.

What can I say about Andy Kubert that hasn’t been said a thousand times before, and better than I could come up with? The man is a legend for a reason and shows it off here. I’ll admit, his Bruce Wayne isn’t my favorite, but that’s so nitpicky in a book that looks this good. His action at the beginning is perfect. His setting of the Batcave is fun. His design of the Batman (a little Knightmare-ish) is quite cool and different. Kubert doesn’t know how to disappoint, and I loved every panel here.

This is such a strong start to what’s expected to be an exciting ride. Taylor and Kubert are totally in sync here, delivering all the goods you’d want for a debut issue. I expect next month to provide more answers, but also get us asking more questions.