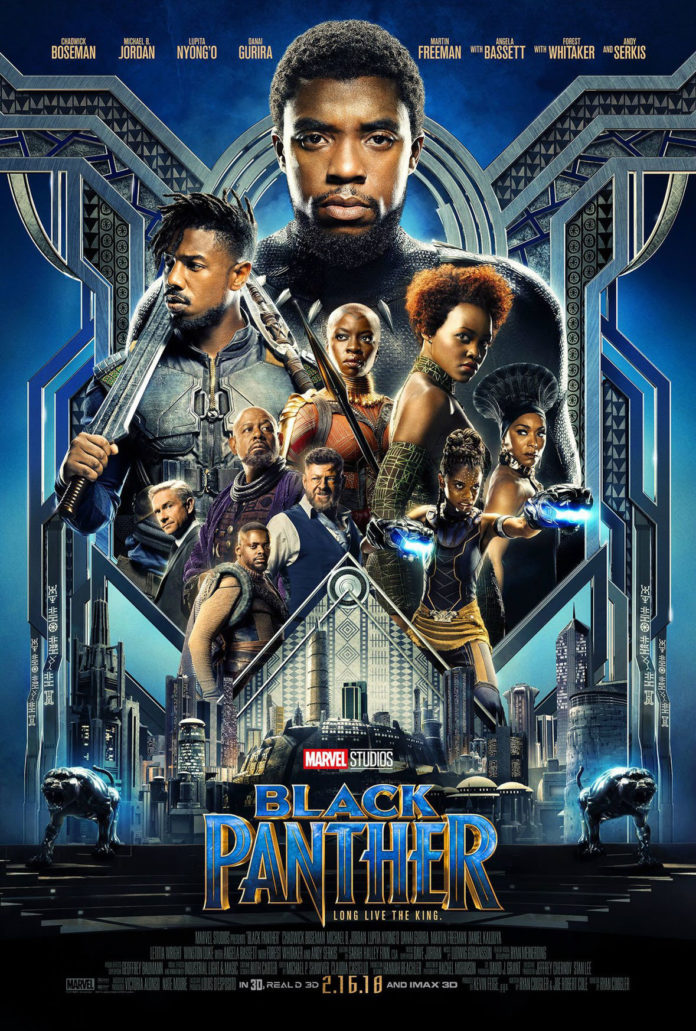 Black Panther! Oh yeah – this is how it’s done!

This fine film is my favorite kind of superhero movie because the characters are not peripheral to the special effects. Director Ryan Coogler brings an exceptionally strong cast to the screen in a captivating, character-driven story. Of course there are stunning special effects, but the effects don’t overshadow the characters.

Black Panther is a Marvel Comics character first introduced in 1966. He and his people live in the fictional country Wakanda, which, in the far past, was struck by a meteorite containing a powerful mineral called vibranium. It allowed the Wakandan tribes to advance technologically so rapidly and dynamically that the king decided to conceal the country from the rest of the world. So, the film takes place in the present-day in a world that believes Wakanda is a hopelessly underdeveloped, third world country.

Chadwick Boseman portrays T’Challa/Black Panther, returning to Wakanda after his stint with The Avengers, to assume the title of king. Black Panther’s enhanced abilities come from a combination of advanced technology and experiencing ancient, Wakandan rituals infused with the power of vibranium. He will soon need his powers as he goes up against two formidable villains.

Andy Serkis plays Ulysses Klaue, an opportunistic mercenary implicated in various assassinations of important Wakandans in attempts to steal vibranium to sell to the highest bidder. In league with him, but with a completely different agenda, is Erik Killmonger (Michael B. Jordan). Killmonger witnessed the death of his father as a child in Oakland, California. Erik was left behind, failed by the system, and through service as a Navy Seal and a CIA operative evolved into a ruthless and efficient killer. I’ll leave it for yourself to see Erik’s tie to Wakanda, but Erik’s plan is to kill King T’Challa and take the throne of Wakanda as well as avenge his father’s death: as he says, “The world’s going to start over. I’ma burn it all!”

Meanwhile, unaware of Killmonger’s true identity, T’Challa rules Wakanda in the traditional way with the assistance of his sister Shuri, played by a scene-stealing Letitia Wright, his mother Ramonda (Angela Bassett), and Shaman/Mystic Zuri (Forest Whitaker). When he learns that some vibranium, in the form of an ancient weapon, has been stolen from a museum, he goes after it with the help of CIA agent Everett K. Ross (Martin Freeman). T’Challa will soon encounter Killmonger, learn of his past and familial connection, and experience conflicting emotions.

The trail of the stolen vibranium leads T’Challa and Ross to the streets and casinos of Busan, South Korea. Most of the film was shot in Atlanta, Georgia , and the Pinewood Atlanta Studios, but on-location filming sites include Busan and Iguazu Waterfalls in Argentina. Both locations provide impressive visuals.

The fetching Lupita Nyong’o plays Nakia, T’Challa’s ex-girlfriend, and it’s obvious that the two still share some strong chemistry. Nakia spends her time in the outside world helping victims of brutal territorial regimes. However, she returns to Wakanda to help keep its enemies at bay. The king is protected by a fierce group of female warriors. Notable among them is Okoye, played by Danai Gurira, vibrant in every scene she’s in. Also noteworthy is the leader of a renegade tribe apart from the Wakandan territory, M’Baku (Winston Duke). M’Baku leads the Jabari Tribe, worshippers of the Gorilla God Hanuman. They refused to submit to the rule of the Wakandan royal family and retreated to the mountains. He’s often a foe of T’Challa, but can he be counted on to help in times of great need? That becomes a very important question in the story line.

The cast works well in ensemble and are quite believable as they do completely unbelievable things. As far as theme goes, Coogler says it’s all about responsibility and identity: “What do the powerful owe those in need? What value is strength unless you’re using it to help someone?”

The film’s message seems quite timely for today’s problems. As in all super-hero films, good triumphs in the end as you know it must. As T’Challa says, “We must find a way to look after one another, as if we were one single tribe”. I couldn’t say it any better than that! Black Panther is a don’t miss film, and be sure to stay through the credits for 2 bonus scenes. – JoAnne Hyde