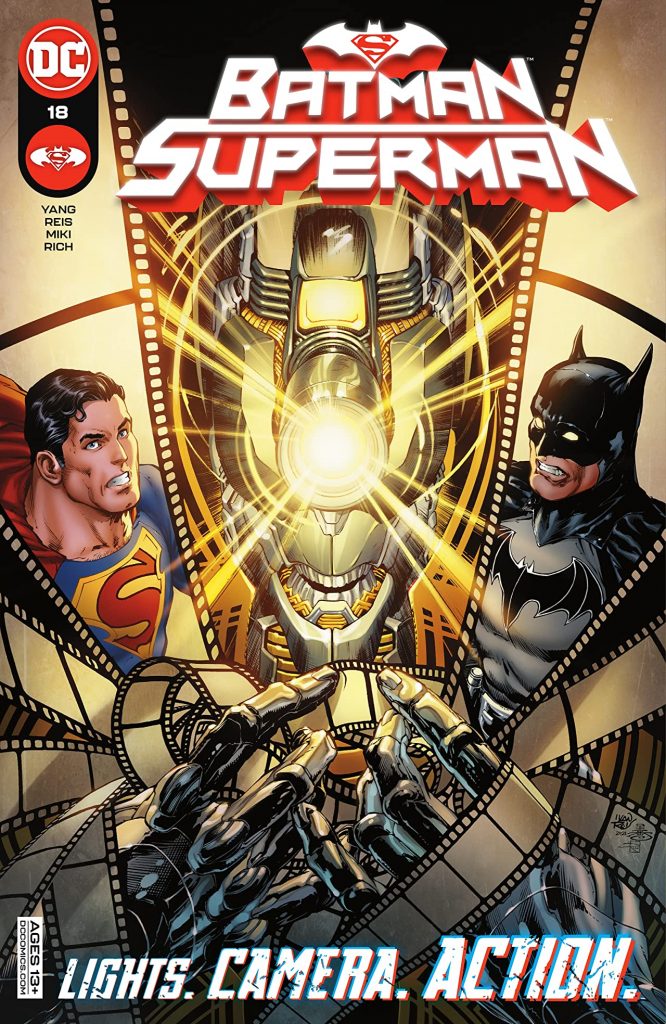 Well, this is just delightful.

Sometimes when you’re reading a story, particularly in team-up books, you find yourself hesitant to get sucked into the story. The creative teams don’t normally stick around too long, the stories can run out of steam or morph into a retelling of something we’ve seen time and time again, or we know the stakes aren’t really there since nothing in the team-up book would impact what’s going on in the flagship character titles. These things happen and I understand being wary of team books for these reasons.

Those things are not concerns for this run of Batman/Superman.

We are three issues in on “Worlds Apart” and I am really enjoying this storyline. Writer Gene Luen Yang and artists Ivan Reis and José Luís have been crafting an Elseworlds-esque, Golden/Silver Age-ish adventure sprawling across multiple realities. Until this issue, I had thought this was simply a fun little tale told in a completely disconnected setting where reality allowed for some modern technology to exist in a 1930’s/1940’s aesthetic time. That all changed with page one in issue #18.

Sometimes. when we find out a storyline is happening in a sub-reality from the main universe, it can feel like all stakes are lost. Sure, the events can be entertaining and the characters fun, but what does it really matter in the long term? When the action inevitably shifts back to the main reality all the tension and intrigue dissipates. Again, that’s not the concern here.

Gene Luen Yang has found one heck of a story mechanism and is allowing it to play out in a really wonderful way. When the reveal around how the separate Batman and Superman realities are presented, it actually manages to enrich the story that proceeded it. Why were those realities so familiar while also so foreign, what has made these issues feel like you were watching an old film serial series? The answer speaks to a new threat that Earth-Zero Batman and Superman are facing, and one of our pocket universes (“World of the Knights” and “The World of Tomorrow”) heroes will comfort as well.

The art on the title continues to be excellent Reis and Luís are a winning combo. The juxtaposition between the stylized vintage feel of the sub-sub-universes and the modern DC house style add layers and a visual dynamic that furthers the storytelling. Nearly everything works, from inventive panel work (a bit less than previous issues honestly) that become plot points of their own to the texture of the suits, the pencils are near superb. My nitpick would be the backgrounds, which are often lacking in detail but never distract.

To me, Batman/Superman has presented the best argument for the Infinite Frontier initiative at DC Comics. There is more creativity and intrigued in this book than I’ve seen in a lot of the Tier One titles. It’s fun. It’s whacky. It’s engaging. I have no idea where it’s going but I can’t wait to see it. Don’t miss this book. – Garret Grev 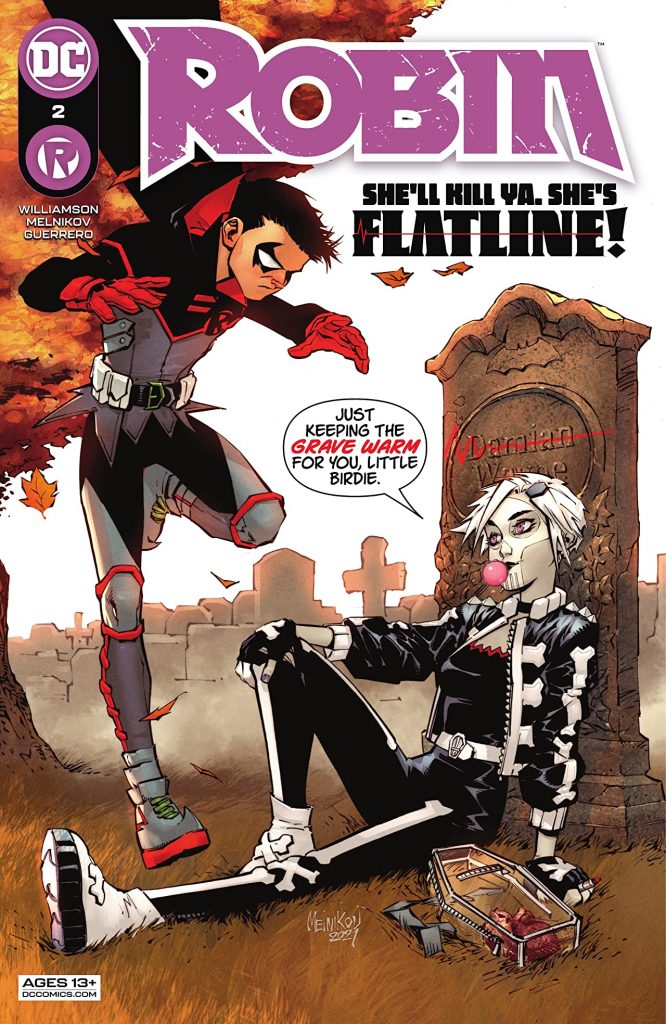 After the shocking cliffhanger of the last issue where Damian had his heart ripped out in mortal combat with Flatline, where does the book go from here? Resurrection, of course!

As Damian wakes up, he finds Ravager standing by his bedside, waiting to play Basil Exposition for both the young Robin and the audience. The gist is this-it’s called Lazarus Island for a reason, so if you die, you get resurrected. The tournaments are to the death, but just like a video game, if you die three times you stay dead with the last one. No Continue Screens here! Oh, the prize, by the way-immortality!

The issue moves quickly as we get to know the rest of the combatants on the island. Outside of Flatline, who’s Lord Death Man’s sidekick, a character named Respawn caught my eye. He’s a meta-ouroboros, clearly inspired by Deadpool, who was inspired by Deathstroke, and Respawn bears more than a passing resemblance to both. It’ll be interesting to see more of his personality as the story progresses.

Of course, the combatant I’m most excited to see is Connor Hawke, who is just going by “Hawke” on the island. He was brought by the League of Shadows, to whom he seems to owe some debt to. Fans of a certain generation will recall his time as Green Arrow, particularly a certain storyline, “Brotherhood of The Fist” where he teamed with Batman in a competition that settled who was the best martial artist in the DCU. Hint-Connor was way up there in the rankings!

Much of the same character notes for Damian continue in this issue. His brashness and arrogance are on full display, which will be off-putting for some. Williamson softens it again with another appearance by Alfred’s ghost and Damian’s attachment to his manga. I have to admire his resolve to solve the case on his own, whether or not that’s just stubbornness on his part, a desire to atone for Alfred, to prove something to himself, or all of the above. Yeah, he’s a little jerk, but he’s trying.

Melnikov’s art has a youthful energy that is perfect for this book. His two-page spread depicting Damian lethally wiping out his competition is brutal but artfully hides the more gruesome moments. It speaks to his mother’s upbringing how much he ruthlessly enjoys the bloodshed of his enemies.

While the last issue ended in a cliffhanger, this goes the opposite route, and as such, lacks much of the punch the prior entry had. I still enjoyed it, but it was missing the suspense and danger, thanks to being bogged down by all the setup and lack of stakes when you realize death is only temporarily temporary. Now that things are more established, this book should be ready for take-off next time! – Javier E. Trujillo 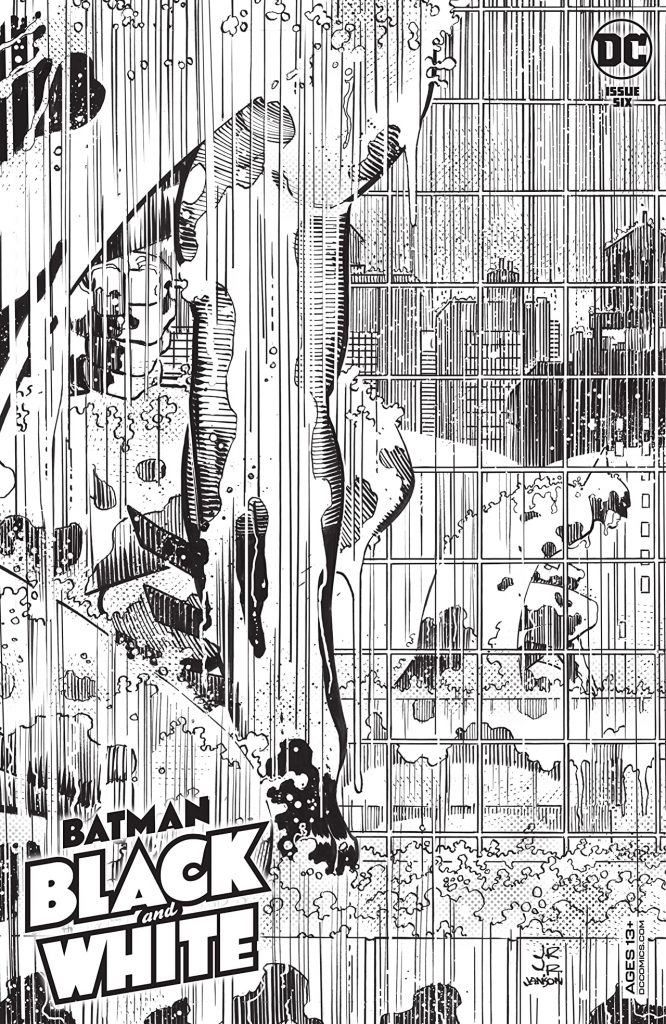 Writer Brandon Thomas and artist Khary Randolph bring us the first chapter in this final issue of the current volume of Batman: Black and White, “The Second Signal”. Two industrious young men, residents of “The Hill” in Gotham, construct a second Bat-Signal in the hopes of getting the Dark Knight’s attention. As established in 2000’s Batman: The Hill, this area is a part of the city that gets overlooked — not just by the GCPD, but by The Batman as well. The Mad Hatter has taken advantage of that and has been getting the residents to do his dirty work via his trademarked mind-controlling hats. Michael & Nathan Rook wanted to alert Batman to their missing teacher and of course, the Caped Crusader sets about stopping the Hatter. Khary Randolph’s Batman reminds me of Brad Walker’s and his Mad Hatter is suitably malevolent.

His compositions are dynamic, fluid, and cinematic. I love his Batmobile, too, which takes cues from Batman: The Animated Series. Thomas ties everything up with the help of the Rooks and leaves the story on an upbeat note of future adventures.

“The Abyss”, by storytellers Pierrick Colinet & Elsa Charretier, takes a look at perception, examining the theme of whether or not it is reality. Three different patients — a bystander, an officer, and a child, speak to a psychiatrist about their respective encounters with the Batman as he rescues them from Man-Bat. Charretier makes excellent use of the black/white format — not just because the story relies on looking at a Rorschach Test, but how she uses inky blacks to tell her story. It’s also worth noting that each patient has a different interpretation of how the Caped Crusader appears, an interpretation that changes from their experiences. I enjoyed rereading it and noticing the differences, along with the foreboding feeling at the conclusion.

Nick Derington, fresh off Future State: The Next Batman, provides the story “Opening Moves”, a chess-themed story featuring Bruce Wayne as Batman. His art here is simply gorgeous, with heavy pencil tones and details, giving depth and shading. The story moves quickly as Batman makes his way through a gauntlet of villains to rescue a young boy from his captors. It ends with a feeling of hope curdling into futility, leaving the reader with a sense of despair by the final panel.

Next up is “Like Monsters of The Deep”, by writer John Acurdi and artist James Harren. If I’ve come across Harren’s art before, I don’t recall it, but he definitely left his mark on me here. It’s terrifying, cartoony, and full of energy! His Batman is a hulking brute while his Clayface takes inspiration from The Animated Series, but morphs into something more frightening when he needs to. His Gotham is seedy and corrupt, as are the criminals Acurdi introduces us to. This is the Basil Karlo iteration of Clayface, so it’s very Grand Guignol as he seeks his revenge and betrays Batman. This one is probably my favorite as we see Clayface go too far and get an acerbic final line of dialogue from the Dark Knight.

Finally, the series ends with a pair of legendary creators, Scott Snyder and John Romita, Jr. “A Thousand Words” is told from the perspective of “Shutterbat”, a former forensic photographer, who quit after documenting the Joker’s attack on a children’s hospital, but who then continued having a career as a photojournalist documenting Batman’s exploits. Snyder gets into what makes Shutterbug tick, analyzing how his job impacted his life and how various publications would manipulate his work to evoke their perception of the Dark Knight. He now faces a terminal diagnosis and has one single question he needs to ask of Gotham’s Guardian. I’ve long admired John Romita, Jr.’s work from his long career at Marvel, and to be honest, I’ve had a hard time adjusting to him being at DC. Something about it just tells my brain that it’s wrong. Having said that, I think his work on Batman has been the best he’s produced for this publisher. His style is more befitting the grimy alleys of Gotham than the glistening spires of Metropolis. I really love the composition of the opening photo and it’s fitting that it features so heavily in this story. They end this issue on an optimistic note, a reminder that every night, every Batman story, is a chance to see it all anew.

And with that, another volume of Batman: Black and White comes to a close. I felt this issue was strong, although not boundary-pushing. Overall, I thought this current iteration had a lot to offer, with very few misses. This issue in particular feels easily accessible to the mainstream audience and is sure to please most Bat-Fans. – Javier E. Trujillo