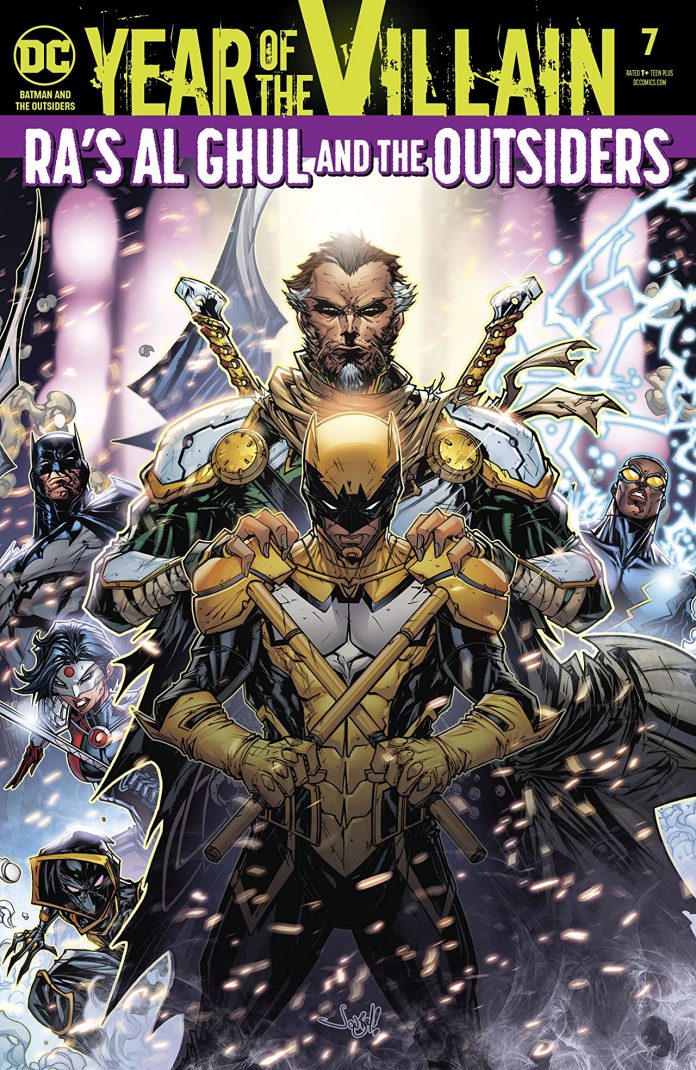 SYNOPSIS: Unable to cope with Black Lightning and Batman’s methods, Duke Thomas finds refuge in the philosophy of Ra’s al Ghul, becoming the latest acolyte of the Demon, as Ra’s at last begins to rebuild his empire!

Black Lightning and Katana find and successfully convince Sofia, now going by the Ra’s Al Ghul influenced name of Babylon, to return to Gotham with them. Signal and Orphan face off against Ishmael, who shows them that Batman has been keeping secrets. Ishmael takes Signal to fulfill Ra’s plan.

The strength of Batman and the Outsiders so far has been in the relationship building that writer Bryan Hill has been doing with the characters. Often working them in pairs, the characters rotate amongst each other to establish dynamics together. Doing it this way means that the whole team has rarely been together for an extended period. While that is the strength, this issue gets back to the action and progresses the overall story.

In the brief quiet moments, the story gives us, the reoccurring issue of trust comes back up. Lightning and Katana have gotten to a point where they trust each other, to the point that Kaliber notes there is more there, but they have “rescued” Sofia and there is no trust on either side there. Sofia even notes that Ra’s trust her enough to not have her in chains like the heroes do.

In any team dynamic, trust is always important. That’s why Hill keeps bringing the concept back up through this book. It feels like his message is if this group is going to become a team, the one constant must be trust. But, how can the team have that trust when they were brought together by a distrustful figure like Batman.

That is the question Lightning is always asking himself in this series. He does it again this issue when he questions whether they should trust Sofia with him. As he puts it, “ people tell me he gets kids killed.” That statement is further hammered home as it is said over Orphan fighting to get Signal away from Ishmael. Here two of Batman’s “children” are trying to fend for themselves after being trapped because of Batman’s secrets.

To further drive home the issue of trust, Kaliber betrays Lightning and Katana, revealing himself to be an agent of Ra’s. It is all part of Ra’s plan, which meant to see the entire team die in Gotham and required Ishmael to change the nature of Signal’s metahuman ability. So far trust has led to the Outsiders being pawns in Ra’s yet to be revealed plan, while all his acolytes are rewarding his trust in them.

That theme of trust and what it really means to all the characters involved in this issue really hit home for me. This was my favorite issue so far. Building up what trust is, while undercutting it at every turn made for compelling storytelling. I don’t know how this team comes to trust each other, but it looks like it will be a fun ride to see how it all comes together.

Also, I’m patiently waiting for the inevitable Black Lightning/Batman confrontation. It’s been building, so it should be a sight when it all comes up. – E. Chad Metz