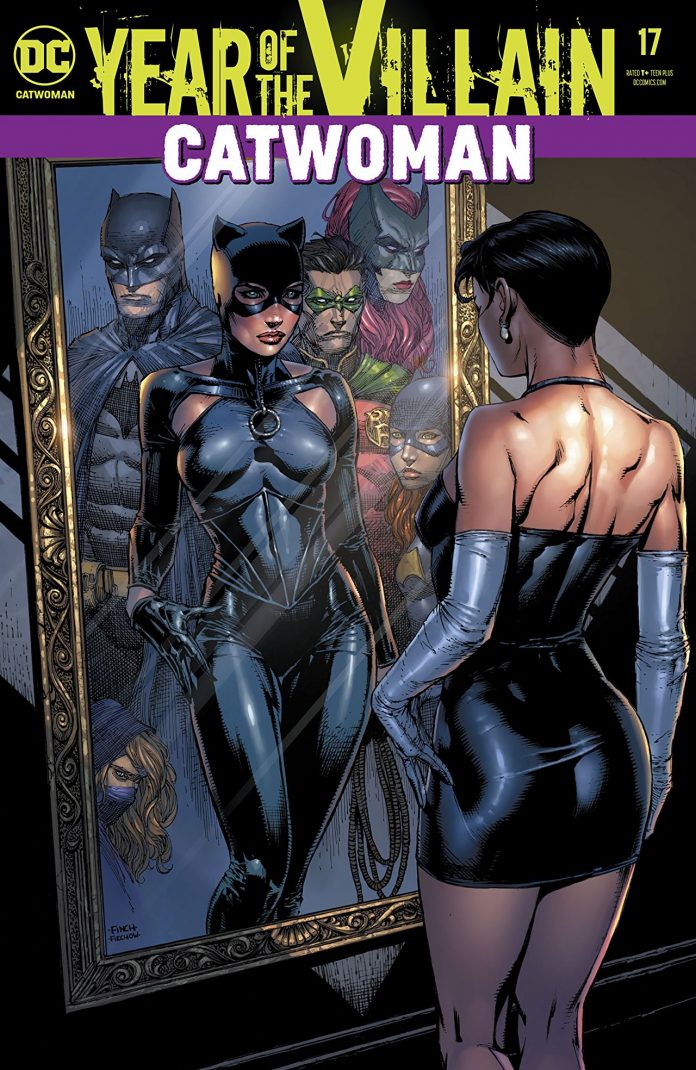 SYNOPSIS: Selina Kyle reconnects with her criminal roots, but to be Gotham City’s top thief again, she has to take out the boss. Using the gift given to her by Lex Luthor, she finally has the key to everything Raina Creel wants-and Catwoman is going to get it first. Which all sounds dandy in theory, but Creel has come too far and put up with too much humiliation from Catwoman to let her win again. It’s a Year of the Villain showdown, but who here is the baddest baddie?

At the end of issue #16, we saw Selina’s surprising transformation as she emerged from the Lazarus Pit after being mauled by Raina Creel’s zombie-like cronies.  Issue #17 shows us what came before by offering a full understanding of Selina’s ominous encounter with Lex Luthor a few issues back; he has offered Selina a choice – go back to Gotham and continue as a “villain,” or become a hero by following Raina Creel to the Lazarus Pit and (hopefully) trying to stop her before she does serious damage to Villa Hermosa.

After she fails to stop Raina at the Pit, Selina decides that she needs some help… and some magic.

And there is only one familiar face in the realm of magic, the occult, and the supernatural that can help Selina handle Raina Creel… and her name is Zatanna.

Author and illustrator Joëlle Jones continue to zig-zag through time while doling out answers to questions that have been lingering since Issue 13.  I’ve said this before, but I’ll say it again — I love the fact that Jones is taking her time with this story and allowing for a bit of suspenseful intrigue instead of force-feeding us answers and resolutions at the end of each issue.  I could understand how her narrative structure could be cumbersome for some, but to me, it adds to the allure of the book.

While handling a complex story structure, Jones is also showing us the complex nature of Catwoman herself by diving headlong into Selina’s psyche in this issue.  We’re beginning to understand why she makes the decisions she does, and we also see how Selina is continuing to feel the lingering impact of her “wedding” with Batman, which I think is smart.

The artwork this month is yet again up to Jones’ superior standards — it is positively sublime.  In the center of the issue, Selina is on her motorcycle considering whether to return to Gotham or stay in Villa Hermosa and all of her thoughts swirl around her as images, resulting in some of the most dynamic layouts that Jones has come up with yet.  Laura Allred’s flawless color choices accentuate the proceedings.  These two women make an exquisite team, and this book is just lovely.

Feel very confident picking this one up on Wednesday. – John Funderburg