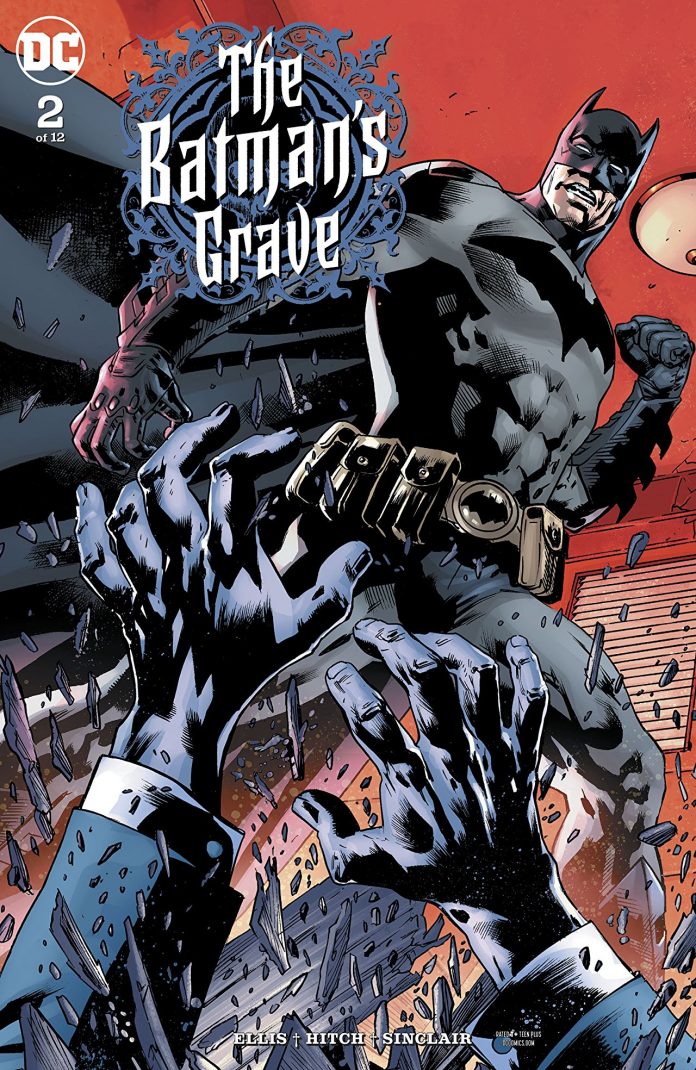 SYNOPSIS: A man was murdered, and The Batman is in his head—and he knows how it happened. All he has to do now is survive his own deduction. Don’t miss the second chapter of this new thriller from writer Warren Ellis and artist Bryan Hitch!

After a powerhouse first issue, Ellis takes a different approach and lets artist Bryan Hitch loose with an eleven-page fight scene! The Batman finds himself confronted by the murderer of Vincent Stannik, who, as a combatant, really gives the Caped Crusader a run for his money!

I love the physicality Hitch bestows upon his fighters as they go back and forth. His Batman is such an imposing figure with his towering physique and it seems almost impossible to believe that this newcomer could give him such a hard time, other than the attacks The Batman with such a manic ferocity that the Dark Knight is taken aback! Hitch perfectly conveys how brutal the fight is by all the destruction they cause.

Both in this scene and later in the Bat Cave, I really appreciate all the little details Hitch puts into Batman’s costume. We get to see the real-world functionality of the utility belt and back at the cave, with Bruce in a more dressed-down version of the suit, we see how the gauntlets connect to his forearm sleeves. I also took to the device Batman uses to swing down from the Bat Plane and confer with Gordon. Hitch could have just drawn a simple rope, but instead came up with a unique handle.

As I mentioned last issue, Kevin Nowlan’s inks were perfectly married to Hitch’s pencils. Much like Frank Miller and Norm Breyfogle, I didn’t appreciate his work necessarily in my younger years, but something finally unlocked in my brain after the first issue and I have been going back and pouring over his art, finding a newfound love for it. Imagine my surprise when I realized halfway through the issue that he didn’t work on this outing! It’s all Hitch, which speaks to the fact how well they compliment each other that it took me several pages and the credits midway through to make me realize the fact that he was flying solo! Never fear, though! Nowlan will return soon!

Alex Sinclair once again shines on colors. Be it the early sunrise in Gotham, the cool, subterranean greens of the Bat Cave, or the bright lights of Gotham City, everything looks magnificent! My favorite moment when it came to the coloring was the Bat Plane breaking through the clouds the Batsignal was shining upon. It felt straight out of the movies!

With the fight taking up over half the issue, that leaves Ellis a whole six pages to delve into characterization and he does not waste it. From a humorous interaction with the GCPD to finding Alfred shirking his duties due to a hangover from the prior night’s bender, Ellis brings humanity to Bruce and his world.

The rooftop scene with Gordon was also executed well. The name of the first issue’s murderer was revealed and it should be familiar to fans of Grant Morrison’s Batman run. While it explains how he was able to go toe-to-toe with Batman, it made me question where this story fits in the bigger picture. Is this a post-Rebirth version of that particular villain or does The Batman’s Grave, like the DC BLACK LABEL books, exist in a world all its own?

Regardless of where the story fits, Gordon sets The Dark Knight Detective off on his next case, while Batman tasks Gordon and the GCPD to follow up on a separate lead from the first issue. Despite how brief this issue felt, I appreciated it building on what came before.

While I really enjoyed this issue, it’s tempered by a sense of brevity given how short a read it was due to the focus on the fight. As a standalone issue, your mileage may vary in terms of value for your money. I think it will certainly come off better in a trade format where the length of time it takes to read it won’t be as noticed. Still, the art is often breathtaking and Ellis gives you moments to chew on during the second half. As with last month, I look forward to where this goes in the next installment! –Javier E. Trujillo