SYNOPSIS: An epic battle is taking place in Gotham City…below the city streets?! Batman and MR. WORTH are locked in a deadly duel involving a rocket launcher, a micro-cave subterranean system, and a whole lot of bloody knuckles. Can Huntress save Lady Clayface before the entire city collapses from underneath itself? 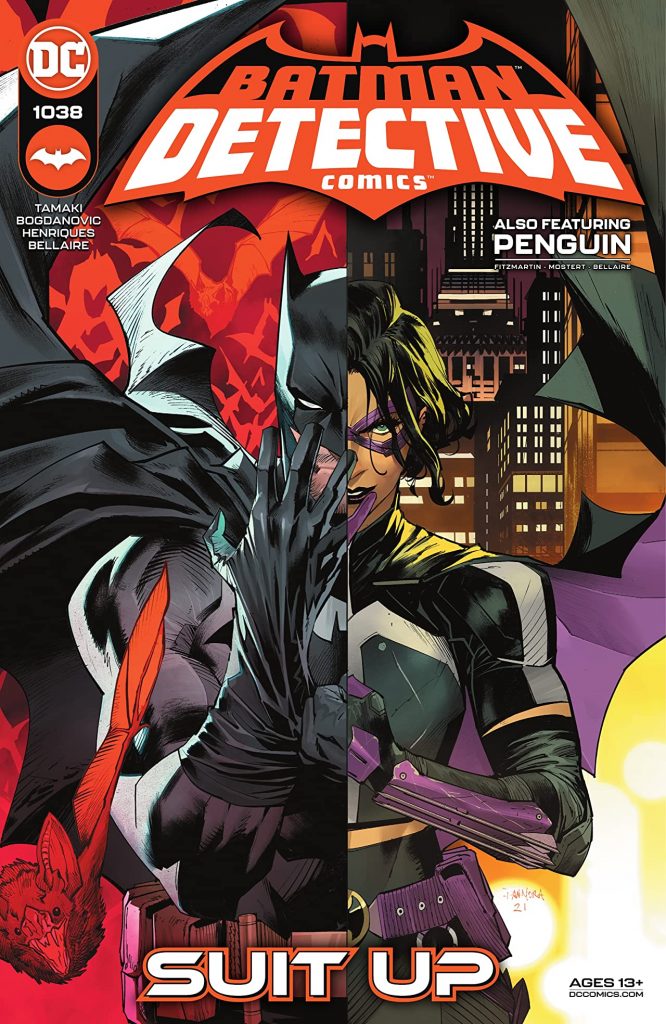 If Detective Comics #1038 is not on your pull list, are you a comic book fan?  This book is beyond exquisite. You do not just get one awesome story but two! Albeit for a bit extra, you still get two great stories.  In the primary, Mariko Tamaki continues her murder mystery with Bruce Wayne at the center while Meghan Fitzmartin delivers a beautiful “rise and fall” Penguin tale.

Now let’s get into it!

Tamaki keeps on with her Bruce Wayne/murder/mystery. Tamaki is doing a good job weaving out this story adding to the depth and psyche of Gotham’s other billionaire Mr. Worth.  This grieving father has his eyes set on both Batman and Bruce Wayne and wants answers.  Some would say that this might be one of those “issues too long,” but I think Tamaki bringing in Penguin and the ever-creepy Hue Vile can help add some legs to this story.

The part of the book where I think Tamaki shines brightest is how she writes the back and forth between Batman and Huntress.  This version of Huntress feels a bit different in this story; there is no insecurity. She is not trying to gain Batman’s trust.  Just back and forth, rapid-fire, in sync with one and other, trustworthy partners.  While the No Man’s Land Huntress is still the best interpretation, I am very interested to see where this take will land.

For the second issue in a row, Dan Mora is not the interior artist. I got to tell you; I don’t miss him.  I like Mora’s art; since being introduced, he’s climbed up my rankings.  But I must say, Viktor Bogdanovic does a fine job on this book.  Bogdanovic’s splash pages and action panels are fantastic. Bogdanovic’s style gives me so many vibes; Jim Lee and Greg Capullo seem to be the heavy influences.  If I ever get a chance to meet Bogdanovic at a con in the future, I can see myself getting a commission.  Bogdanovic draws one hell of a running Batman.  I would not mind seeing Bogdanovic return next issue at all.

The backup story is brought to us by writer Meghan Fitzmartin and artist Karl Mostert.   March of the Penguin is such a fantastic Oswald story.  Not only does it connect to the primary story, but Fitzmartin gives the reader a tremendous look at the “inside baseball” of Penguins status among Gotham Underground.  Fitzmartin delivers a can’t miss for Penguin die-hards such as myself.

Safe to say Detective Comics #1038 is another hit for Tamaki.  It’s also the best book you can buy on New DC Day.  Gotham is in a state of flux; the rich are fighting over each other in the public eye, Huntress is making some strides to taking up the role of sidekick and much more.  There are two great stories in this issue that fans of The Dark Knight are genuinely going to love.  Enjoy this run, everyone; we are in for a treat. – Peter Verra